Bathrooms, bathrooms, bathrooms. It’s all I can seem to think about at the moment. Which is a good thing really, seeing as I have a bathroom and tile show coming up at the end of September (Cersaie – so keep your eyes peeled) and I am finally getting around to remodelling my own master bathroom in 2019.  The bathroom may be the smallest room in most peoples houses, but not in mine, and that doesn’t mean it can’t have bags of style. The problem with designing for myself is compromising with my husband, and also how much choice I know is out there. You’d think that would make it easier wouldn’t you? Designing for a client is much easier though, as you’re working to a brief and leading them on a design journey. Left to my own devices my bathroom would go one of two ways, either strongly industrial with brutalist inspired concrete elements or, soft minimal with colourful elements. And I do mean colourful elements I have a real soft spot for Vola’s coloured taps (especially the HV1) and brassware. At the moment the compromise seems to be veering to black hardware, which you’ve probably noticed is growing in popularity. I saw lots of black metal taps during Milan Design Week in the Bagno area of Salone del Mobile and it’s popping up with increasing frequency in interiors magazines for this autumn. I’ve been contemplating whether it works in a “mixed metal” scheme further down the line if we make changes in the future. I’m not sure it’s as easy to blend with other metals, but maybe I just haven’t considered the right pairing yet. I’m a firm believer that tap (or faucet) finishes throughout the room should be the same. So if I was considering a polished nickel or chrome sink tap, that means that I would insist on a polished nickel or chrome bath tap. Makes sense right? So what on earth might I be considering to “mix”? I think that in some designs, using an alternative metal for the lighting or bathroom sconces, for the cabinetry door pulls and for the mirrors can look really attractive. A medley of brass and black could look really great, but the husband isn’t so sure. Having black metal on everything could be “heavy” further down the line. But for the time being, I’m researching industrial style black bath taps, I’ll keep working on the brass though albeit secretly. 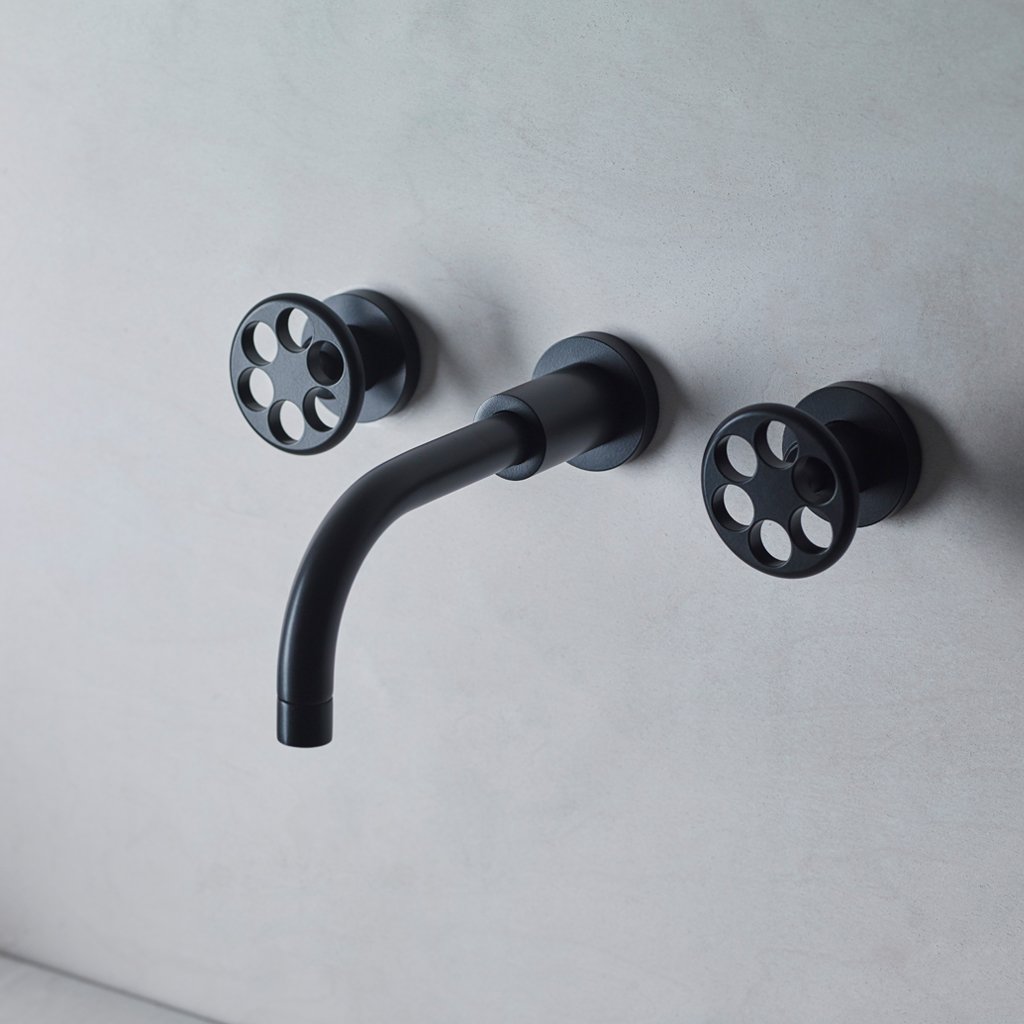 One of my favourite designs is Bert & May‘s wall mounted basin tap and spout made from solid brass with wheel handles. The tap is available in four finishes, but matt black has caught my eye. The only thing I’m even vaguely concerned about is how easy these are to turn for little hands – this is for the family bathroom after all.

As an alternative from Bert & May, the version with cross handles could be a contender. Much easier to turn and still in the great black finish.  One of the things I like about this is that they will develop a beautiful patina over time. 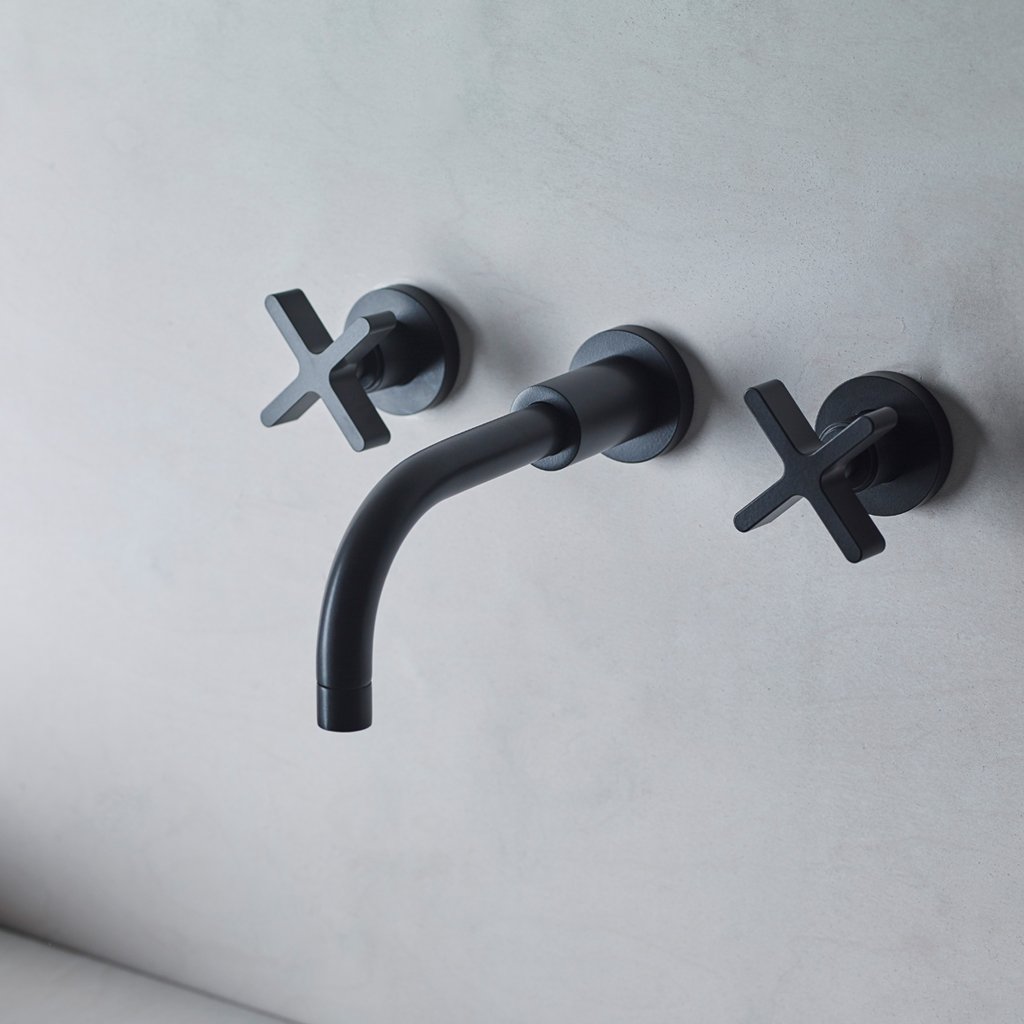 Having started out in the USA, the Watermark Collection are making waves here in the UK and exhibited at Clerkenwell Design Week. Their Elan Vital collection is the ultimate stripped-down aesthetic, it’s almost just straightforward copper plumbing with the look of elbows and connectors, except of course it’s more clever than that. Solidly constructed from brass in hipster Brooklyn, it’s very customisable and a strong industrial look. 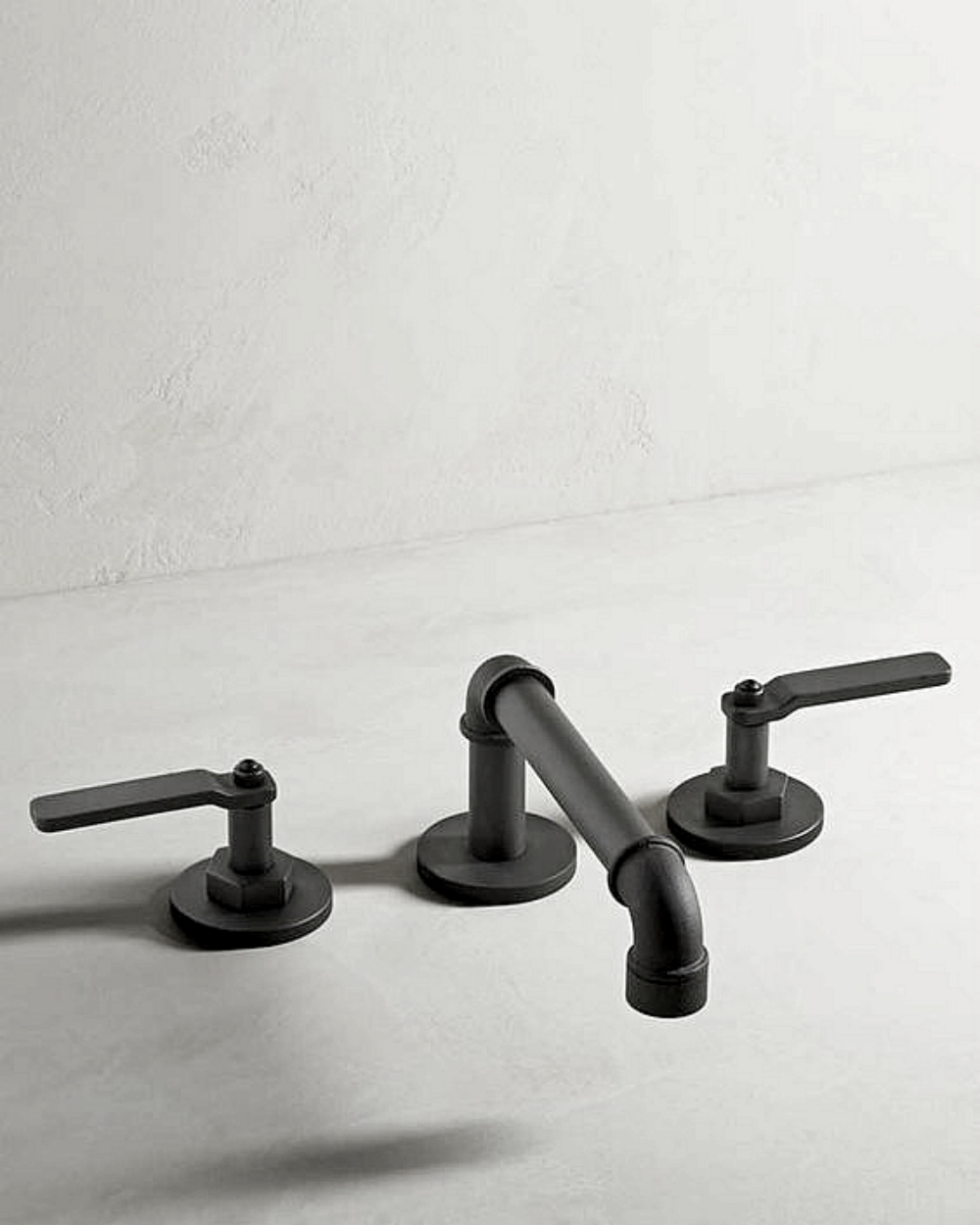 In one of the most decorative Palazzo’s of Milan, I came across Dutch brand Jee-O during Milan Design week this year. It was quite a juxtaposition. Their Soho products are made from stainless steel and finished with a dark, all-weather hammer coating for the perfect industrial look. Their black metal taps and shower hardware stopped me in my tracks. It’s definitely right up my street and I particularly like their shower column, although I wonder if this would work for the whole family. 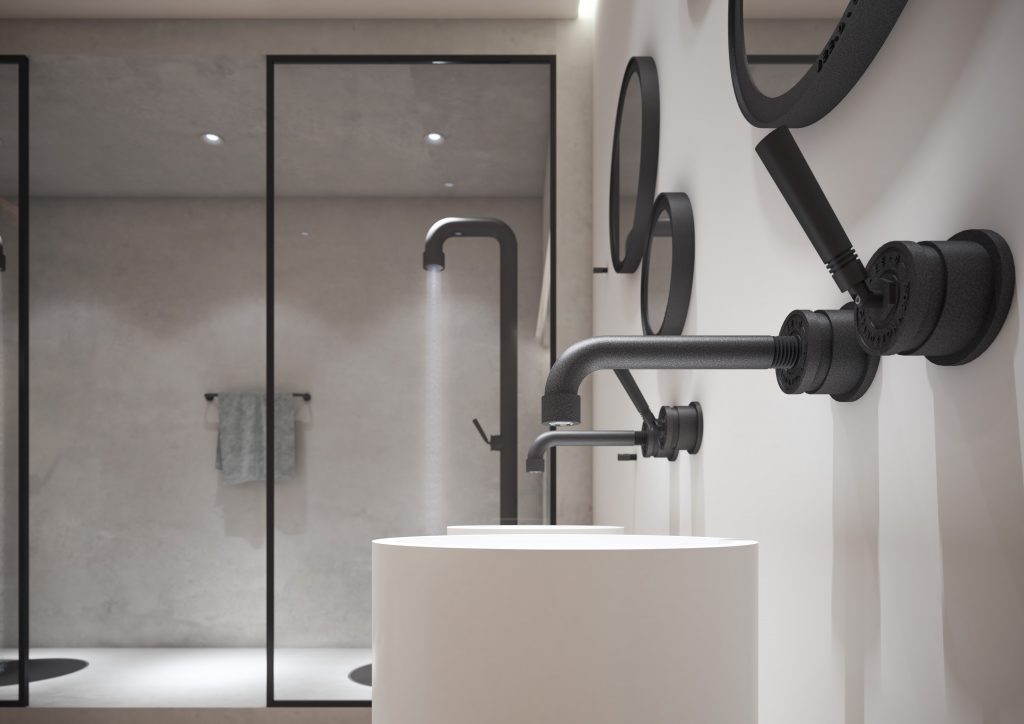 One of my favourite Milanese showroom’s is the subterranean space that belongs to Gessi.  This year they debuted the Gessi and David Rockwell’s collaboration on the Inciso Collection, which everyone from Design Milk to The Times highlighted in their Milan Design Week round up’s. It has the feel of a bygone age, kind of industrial meets art deco, but is still a solidly made contemporary design available in a number of finishes including the glorious black featured here. 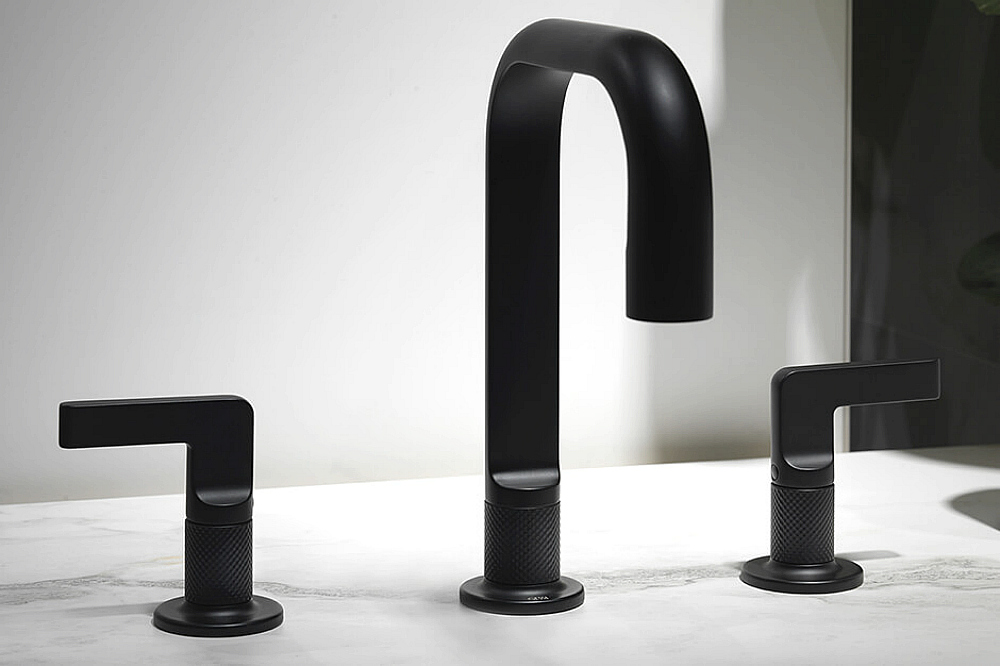 If you’ve ever been to the Design Centre Chelsea Harbour, you’ll know that Samuel Heath has a wonderfully tactile showroom in the north dome. This British manufacturer has been making quality brassware since 1820 and their matt black chrome finish brings their classically traditional line bang up to date. The line that makes my heart beat a little faster at the moment is the Landmark Industrial and Landmark Pure collections. They have lots of other traditional styles that aren’t black metal taps if that’s not your thing. 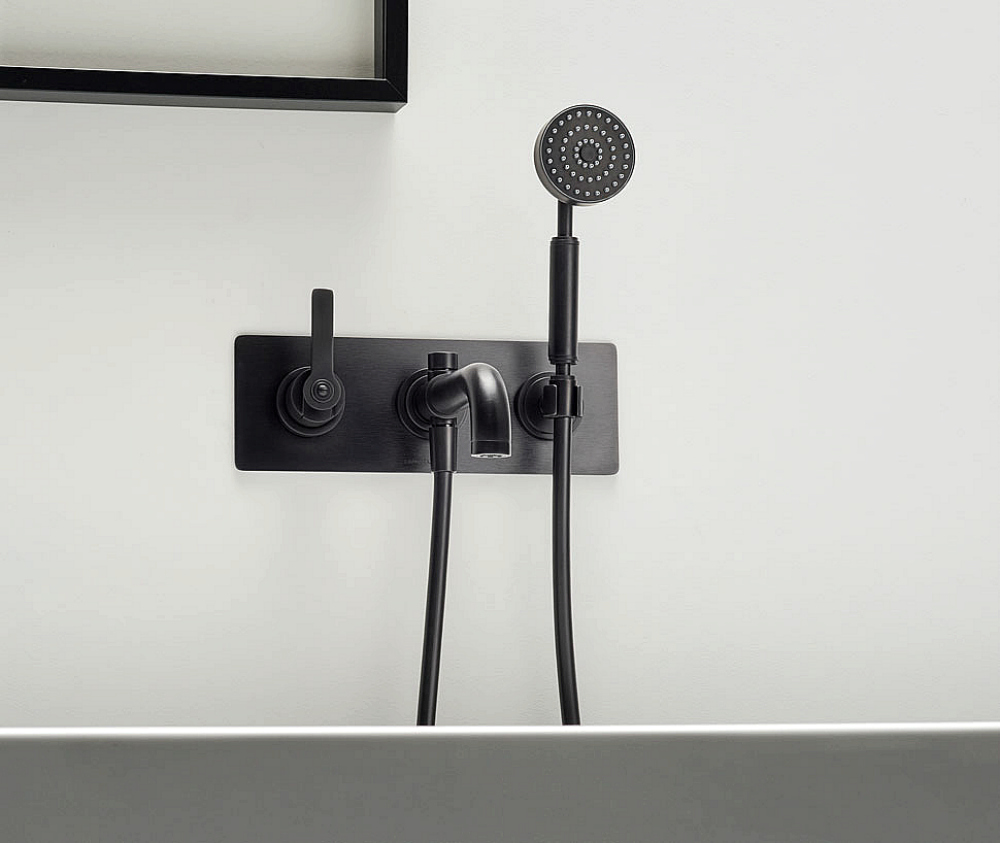 So what do you think, do you have any preferences? Would you have them in your own bathroom? I know black metal taps aren’t for everyone but I think these are tactile, and maybe even be a little glamorous. I’m all for the industrial style black bath taps in my own home, but I think I’ll still check out some brass lights – just don’t tell my husband.

All images courtesy of the brands mentioned. You might want to pin the image below for future bathroom renovation reference. 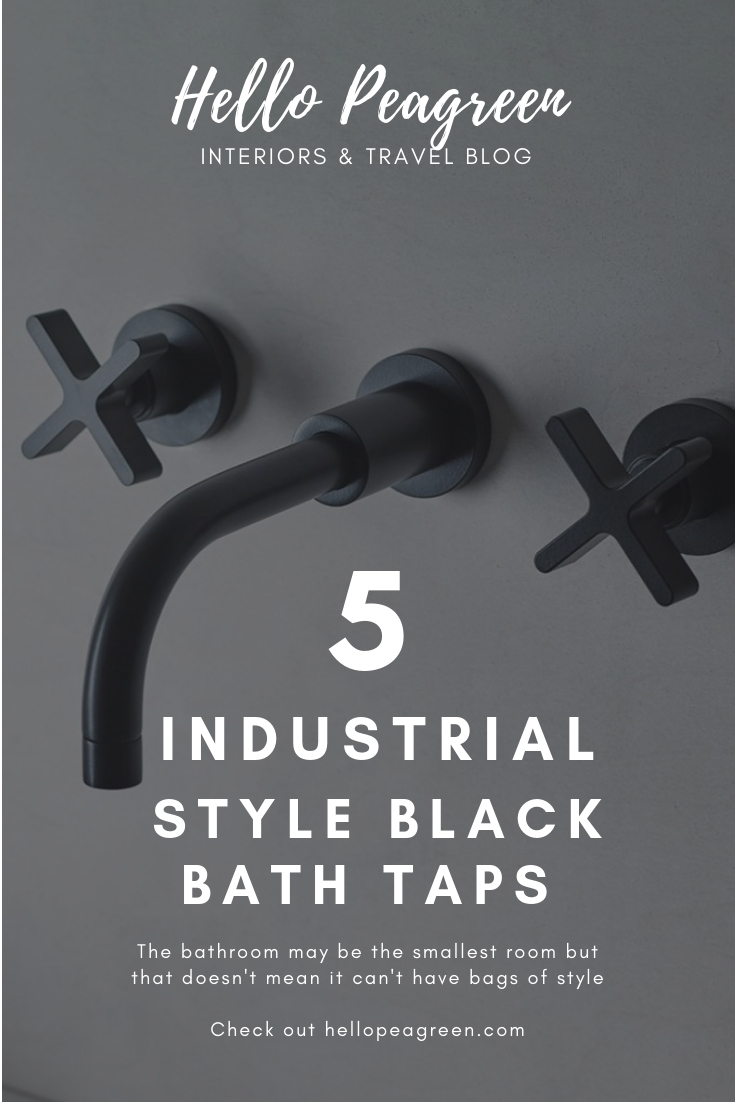