If only life were like The Durrells…. Or at least had a bit more sienna and ochre and blue skies.

You can’t fail to have to have seen that I was in Corfu recently, and those of you who follow me on Instagram will have seen that I visited Danilia Village, the 1930s-inspired heritage site and set of the ITV series The Durrells.

I was exceedingly giddy to visit one of the filming locations of my recent fascination with the Greek island of Corfu, The Durrells. Like many across the country, I am hooked on the TV series. It filled the hole that was previously filled by Downton Abbey, which to me was the perfect Sunday night snuggle on the sofa. Instead of Lords and Ladies, it’s an escape into the comforting world of sun-drenched Corfu, watching the escapades of Louisa Durrell and her four children.

For the uninitiated Louisa Durrell is a widow and a mother of four who made an impulsive decision to up sticks and moves her entire family to Corfu in the 1930s.  With Larry, Leslie, Margo, Gerry and Roger, the dog, they take us on the bohemian journey of their life before the outbreak of the Second World War, with colourful family members like Great Aunt Hermione, hedonistic friends visiting from London and an incredible family dynamic, all filmed in idyllic locations around Corfu. While the TV series is a work of fiction, it has plenty of source material from the books of Gerald Durrell and his brother Lawrence Durrell. 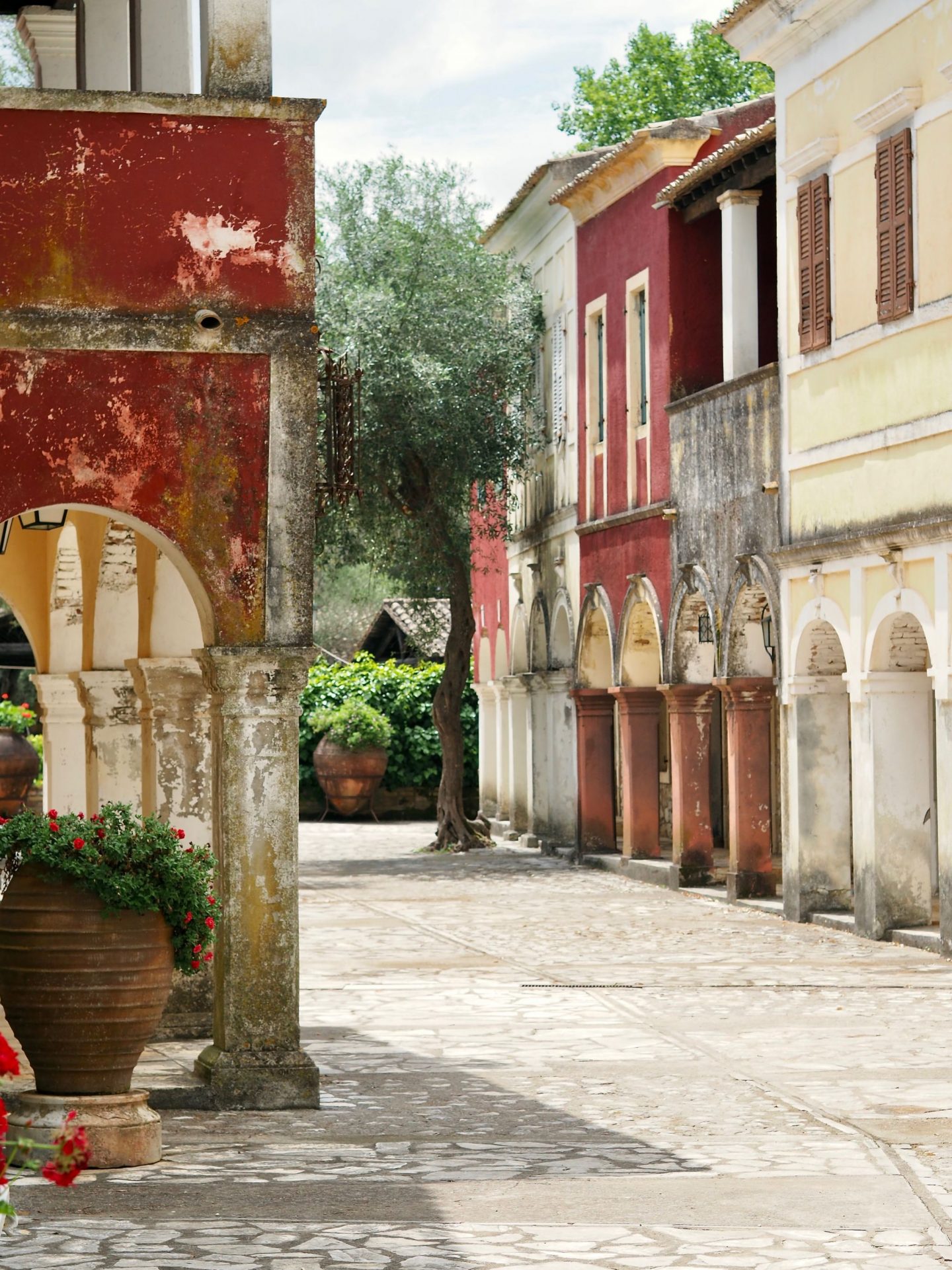 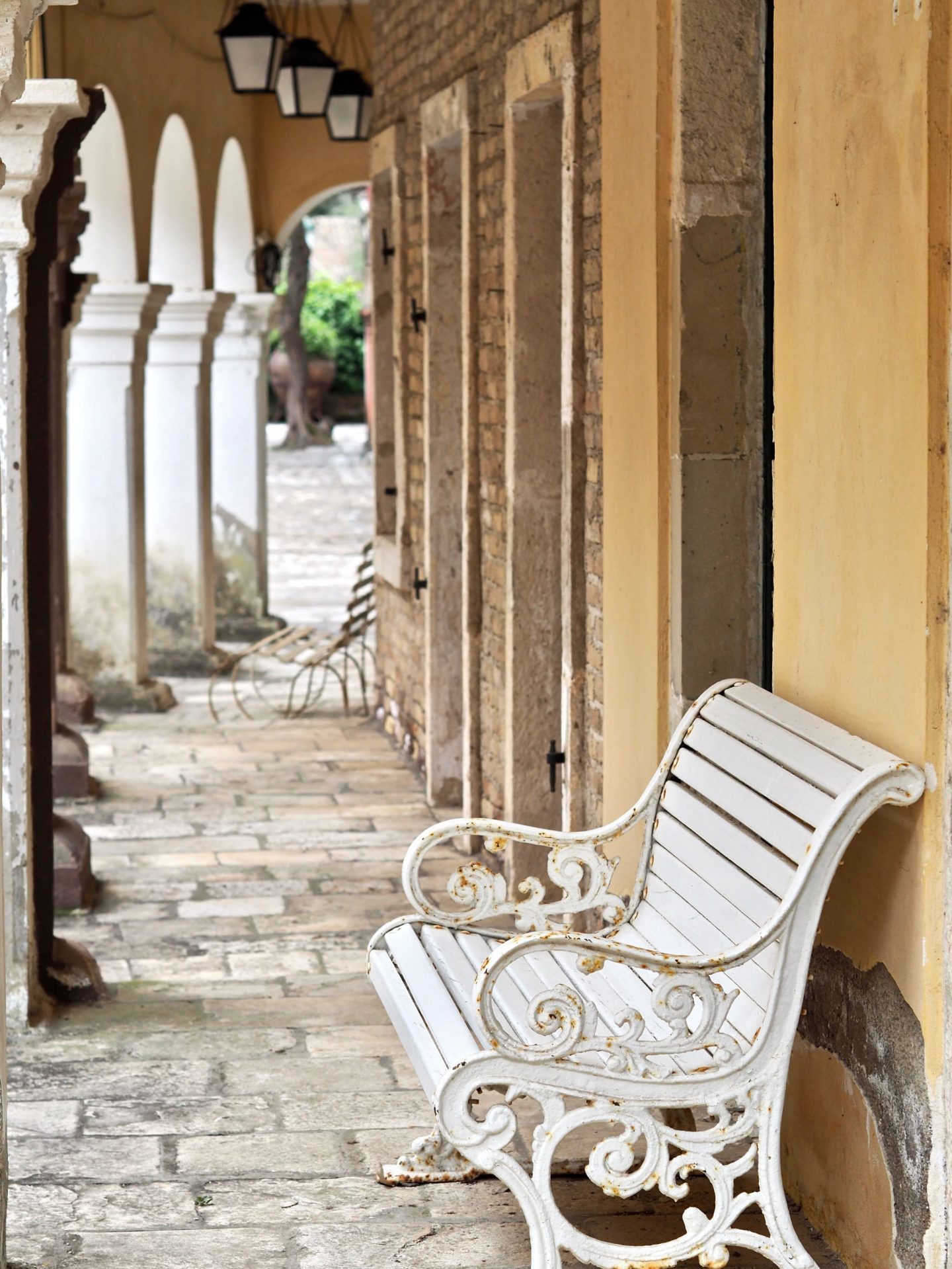 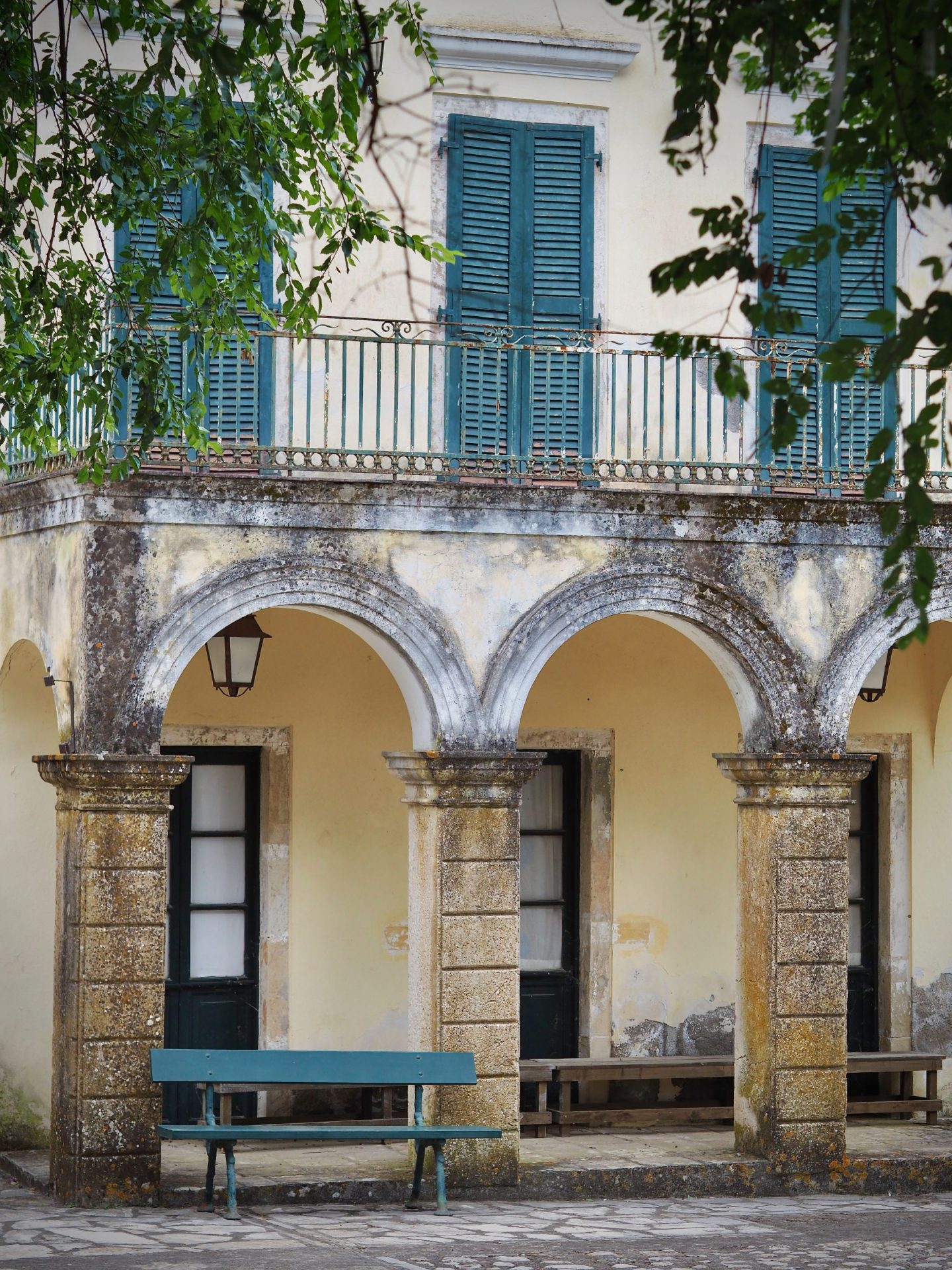 Most of The Durrells is filmed in and around Corfu town and in the quaint Corfu village called Danilia, which is near Kontokali on the east coast. The village is a replica of a 1930’s Corfiot village, built in the 1970’s as an open-air museum. It’s rather surreal to wander the cobbled streets of Danilia, through its two village squares, past a beautiful church (see it’s gorgeous star covered ceiling below), an olive press and into a large open-air café, and even pretend to serve behind the bar. Particularly when you are practically the only one there, well, there were actually six of us in our group, but you get my drift. If you’re a fan of the series like me, you can’t help but try and recall the scenes that have been shot here – the opening credits, when Leslie goes off to join the police, the cafe Larry hangs out in when he leaves the family home, the market where Louisa tries to sell her English food to the locals. The producers of the series must have been in heaven when they found the place. What is astounding is that it hasn’t been overly restored, most of the building materials are reclaimed from earthquakes that happened on the island. The architectural details are fantastic, and I fell in love with the ochre, greens and reds throughout the village. And here’s a little bit of Trivia for you – the village was also used in the James Bond movie For Your Eyes Only back in 1981. 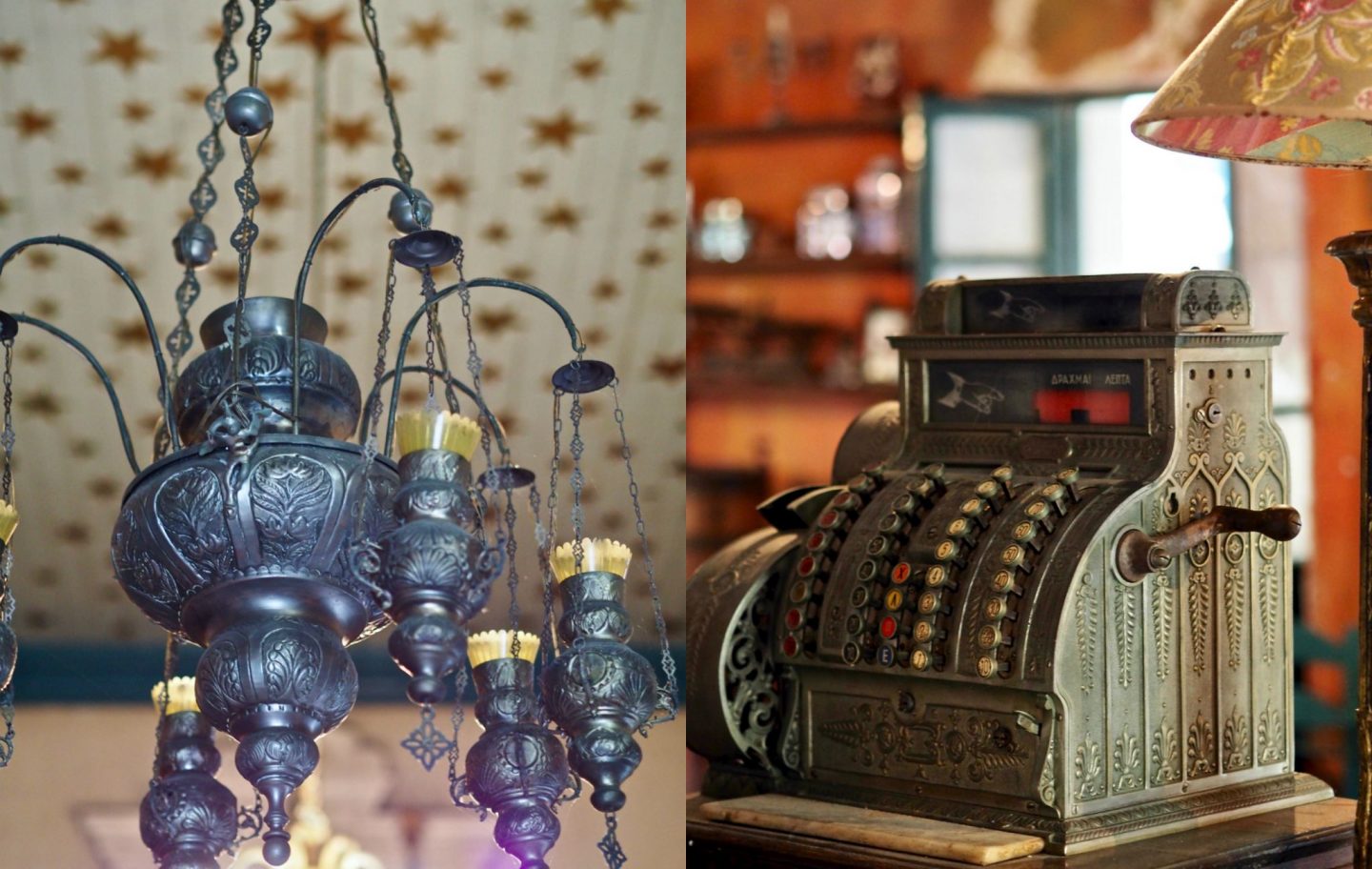 Danilia Village was purchased by the Daskalantonakis family who owns the Grecotel Group in 2002 after it had been abandoned and left to deteriorate. Rather than turning Danilia Village into a hotel, they maintained the charm of the open-air village squares, narrow lanes and Corfu from the 1930’s. Now kept as a living museum it is free to visit for the guests of the Grecotel Corfu Imperial, the Eva Palace Grecotel Luxury Resort and the Grecotel Daphnila Bay Dassia. Danilia Village also makes for a fairytale setting for weddings and private events – I’ve seen the pictures and it is exquisite when the tables are set up, and there are fireworks in the streets. Makes me want to have a second wedding party, maybe renew my vows – I will have been married 15 years this September after all.

To read more about my trip to Corfu and my stay at Grecotel Corfu Imperial take a look here. 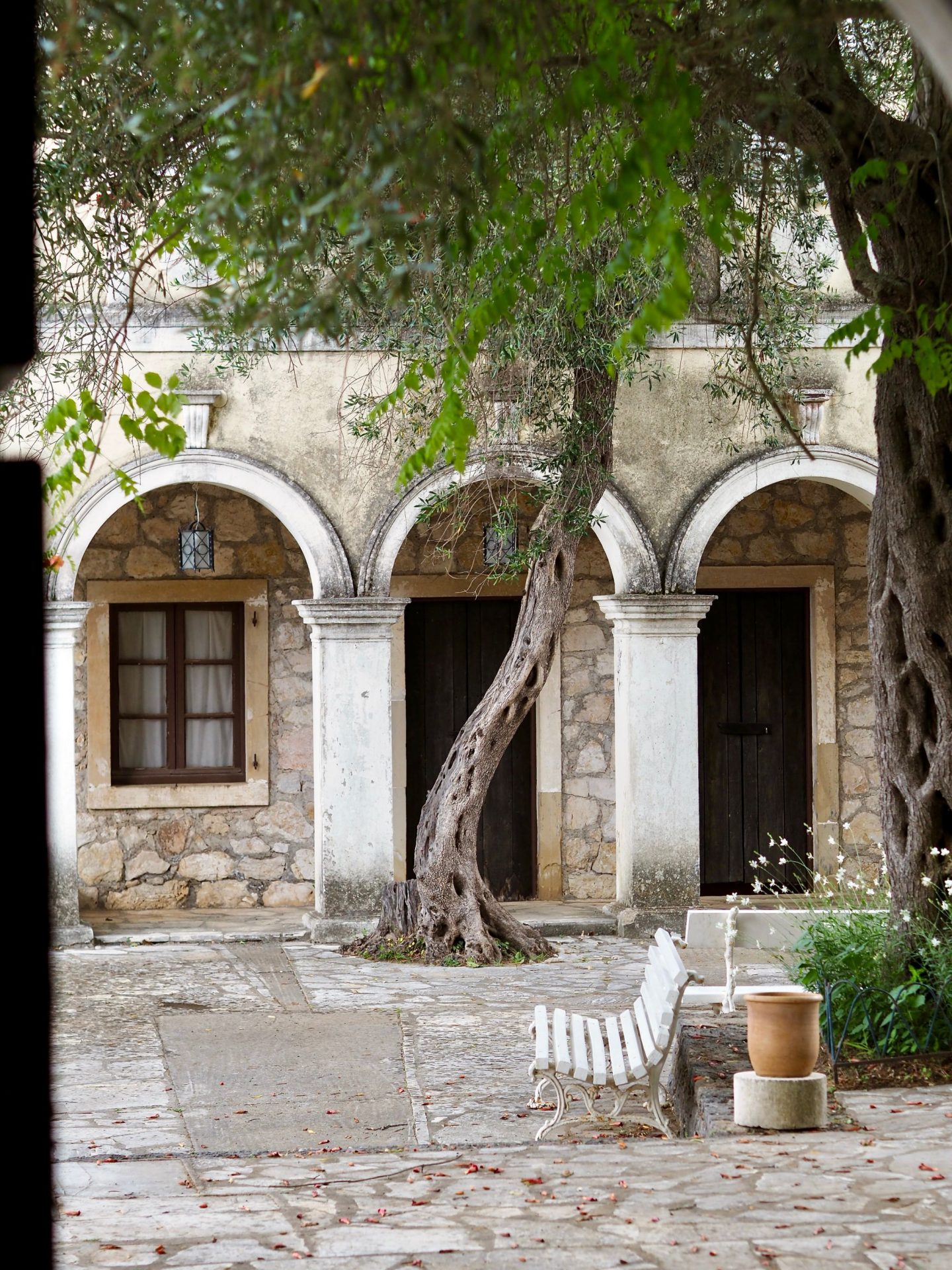 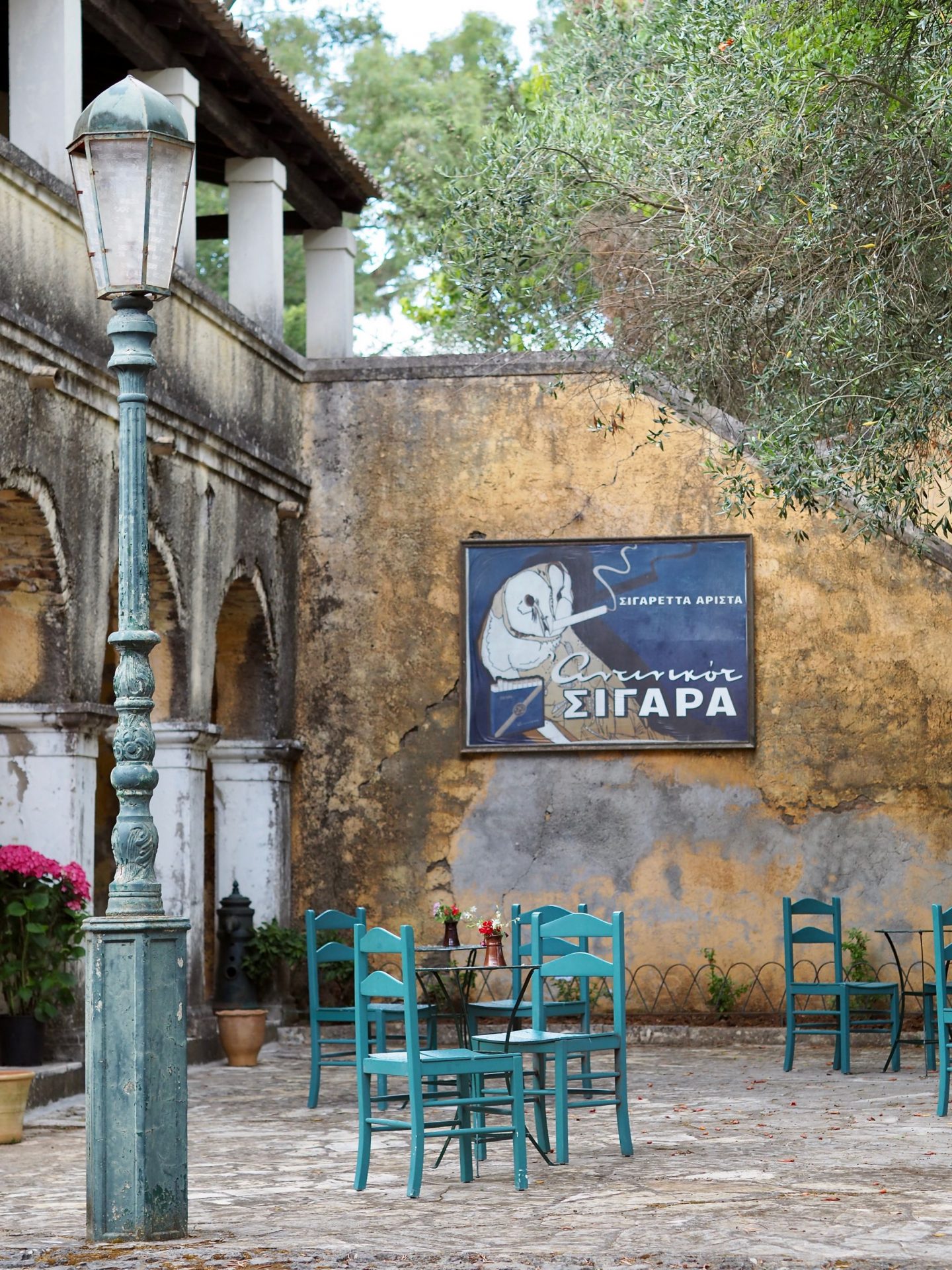 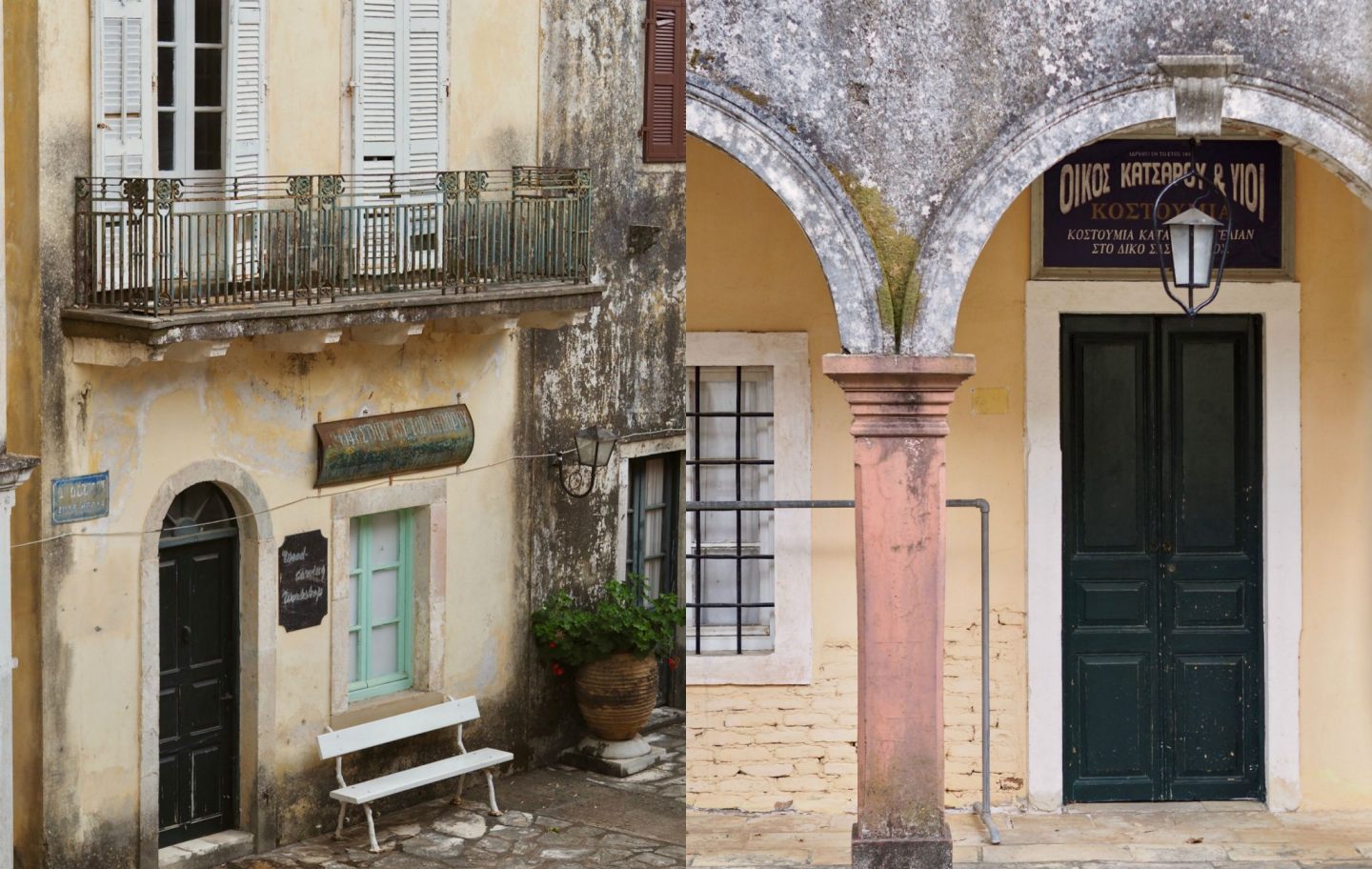 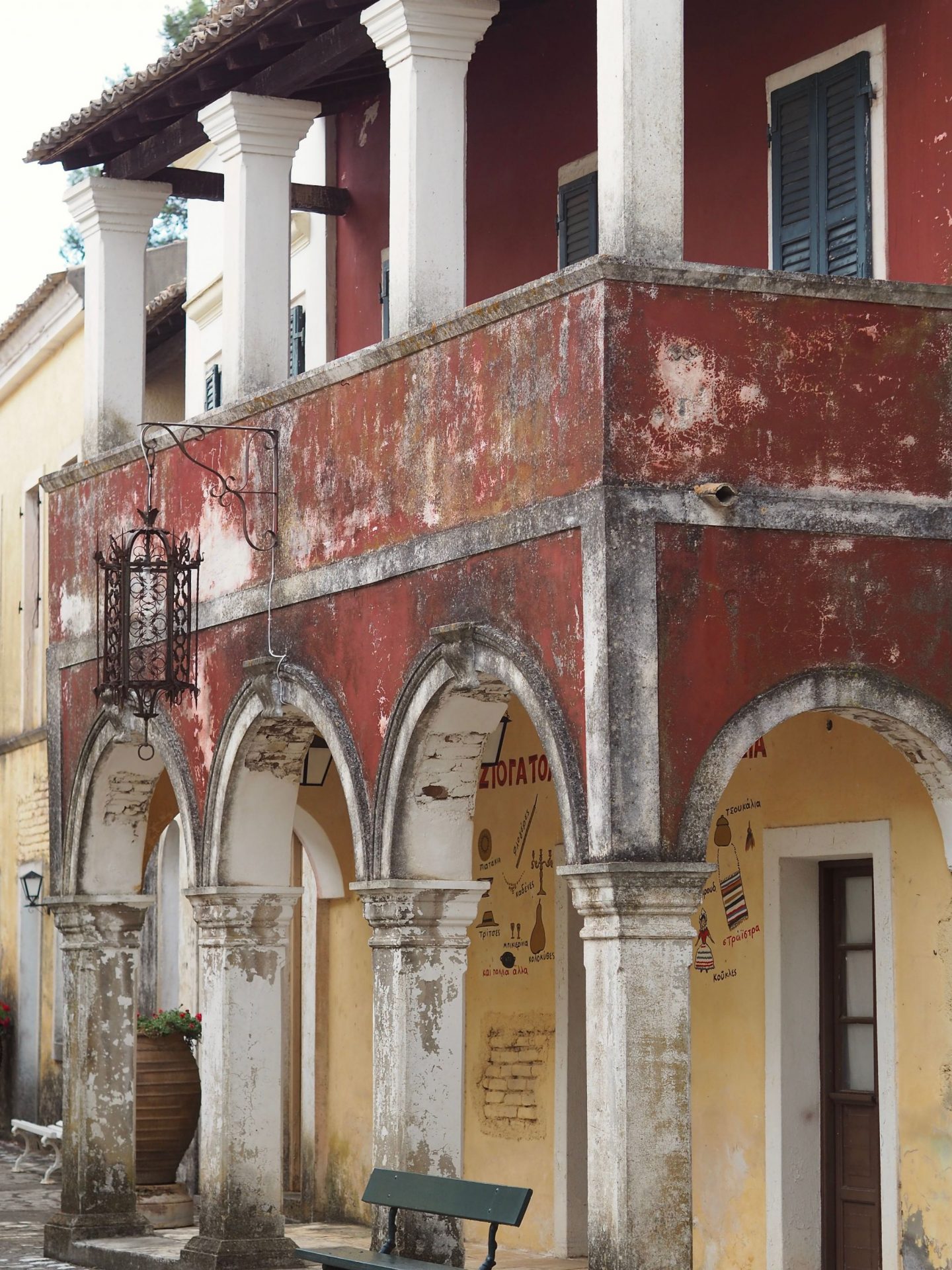 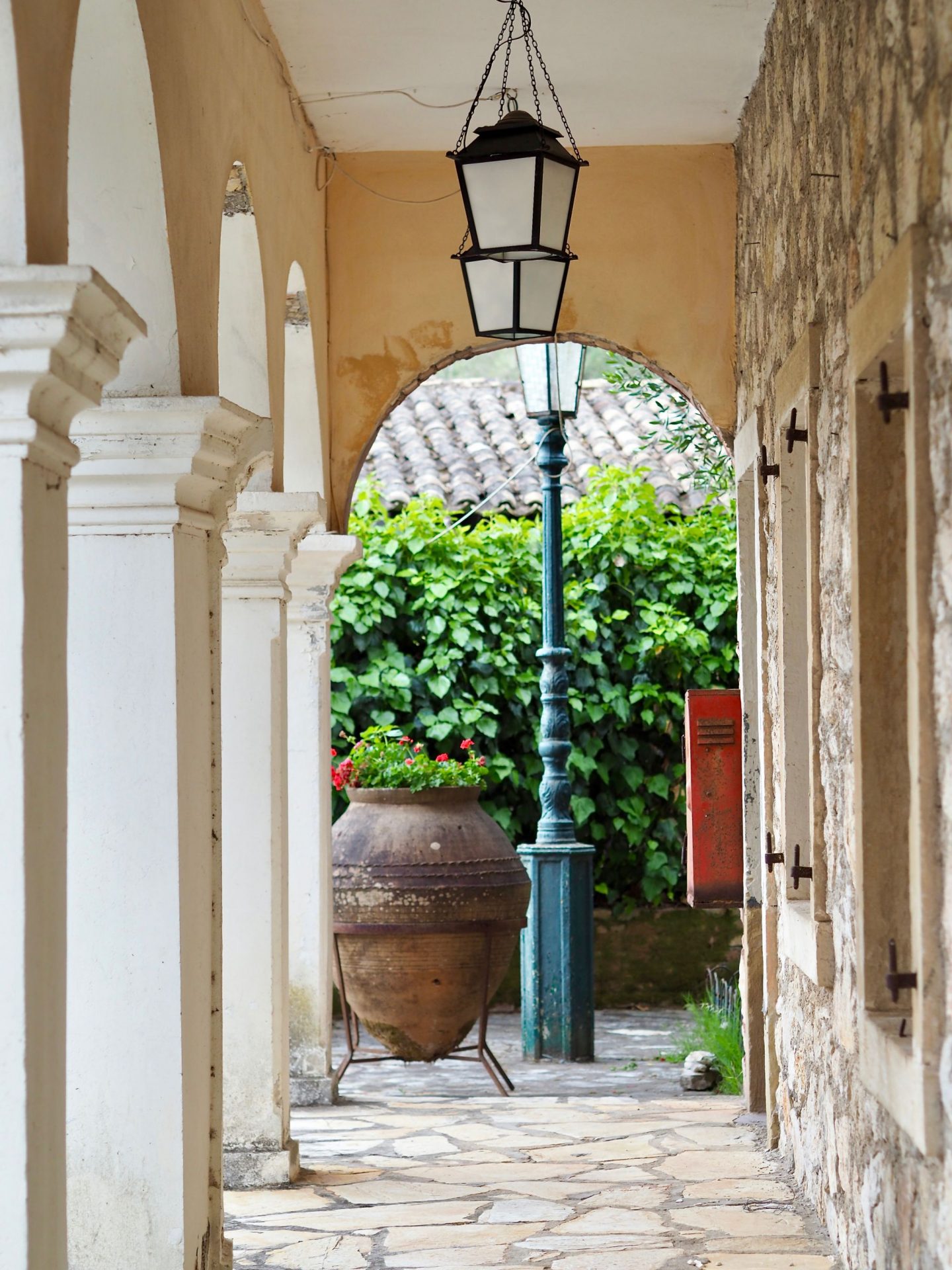 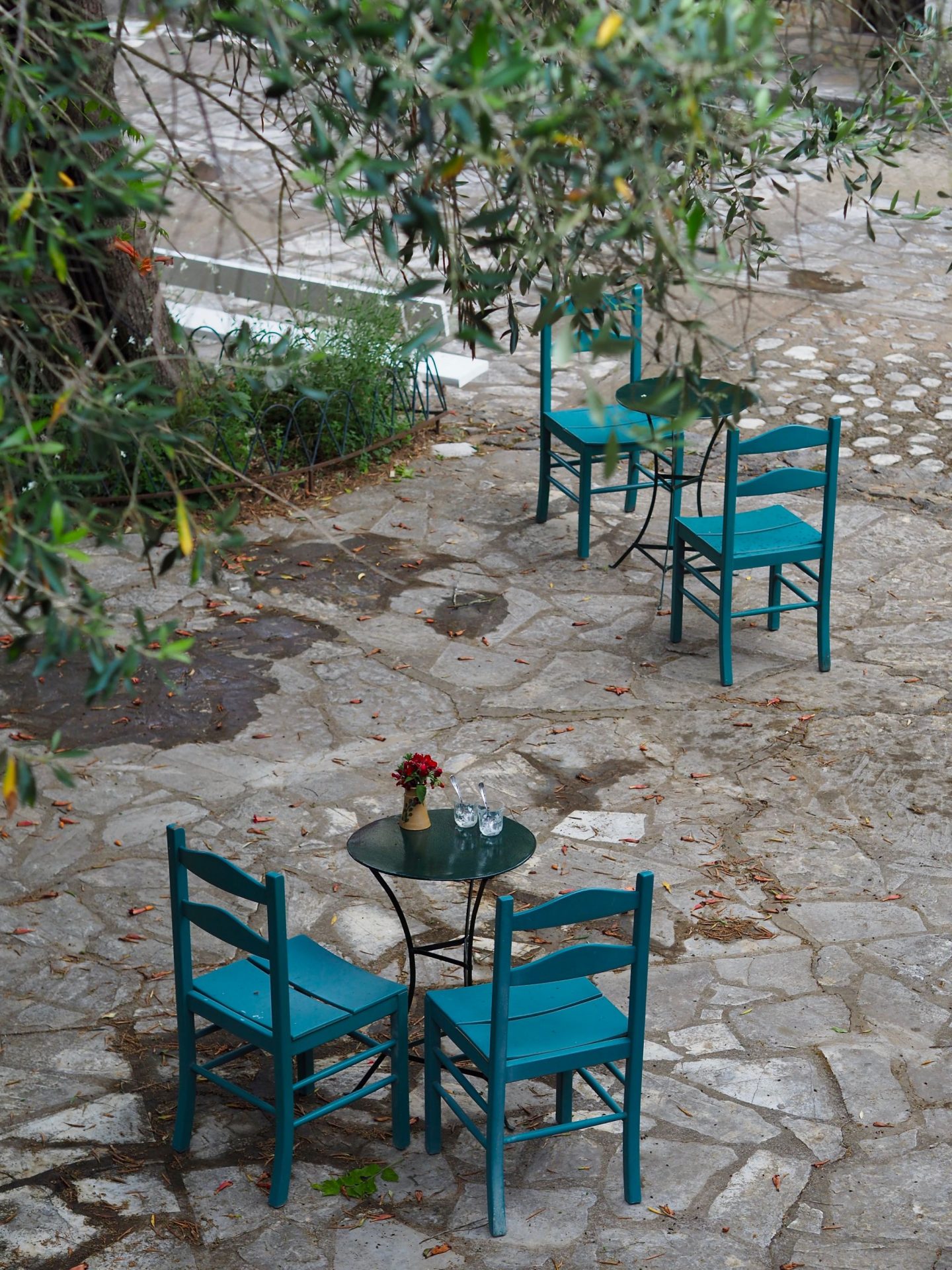 I was a guest of Grecotel, my hotel, all meals, spa treatment and watersports were covered. My economy air travel was kindly provided by Aegean Air including the use of the Aegean Business lounge in Athens.  All words, opinions and images are my own.