Walking, talking and picture taking on a Blog Safari at Salone del Mobile with Design Diffusion.

It’s rare that I am at a loss for words, but I have seen so much at this year’s edition of Milan Design Week that I’m a little unsure where to start. Every year the events just seem to grow bigger and bolder, I study my invites and do plenty of research and yet I still do not scratch the surface. Salone del Mobile had almost 2000 exhibitors alone without including the Fuorisalone, a series of events distributed across various areas of the city. There were just so many highlights from Salone del Mobile. I visited literally hundreds of brands over four days, and I think the only way I can share a manageable and digestible flavour is to share my favourites and then do a roundup. I hope you’ll stick with me as I share my recent adventures in Milan.

I am more than familiar with the 24 halls of Salone del Mobile, the anchor exhibition to Milan Design Weekend this year I was lucky enough to be a part of a bloggers safari organised by design diffusion magazine, which promised to introduce us to the very best in contemporary Italian design. I’d already spent a whole day at the show and participated in a brand speed dating exercise, so was looking forward to someone else taking charge of the schedule and being essentially escorted around the fair; it wasn’t like being a VIP in a golf buggy, more like going out with a kindergarten teacher keeping us all in check and on time.

Our first stop of the day was to the very popular Poliform kitchen booth, which was part of the EuroCucina exhibition.  Salone marked the official rebrand of Poliform’s kitchen collection (formerly known as Varenna) under its own name, Poliform creating one unified lifestyle brand, where the kitchen was presented as a showpiece at the heart of the home. Their stand included the new and impressive Moon Snack Table attached to a kitchen island, which was shown in solid Bog Oak, which is a fossilized wood with a marble lazy susan. Two highlights from Salone del Mobile I spotted throughout Eurocucina were smoked glass (or fumé if you’re being really cool about it) used in glazed cabinets and dark brown marble for work surfaces. Poliform was leading the way with fumé glass doors and using Emperador extra dark marble as a work surface.  Later in the day we also visited the Poliform Living stand which was a case study in soft masculine style, showing plenty of slim profiles on shelving and legs of chairs, often in black metal or dark bronze, lots of suede and a combination of high-gloss surfaces. 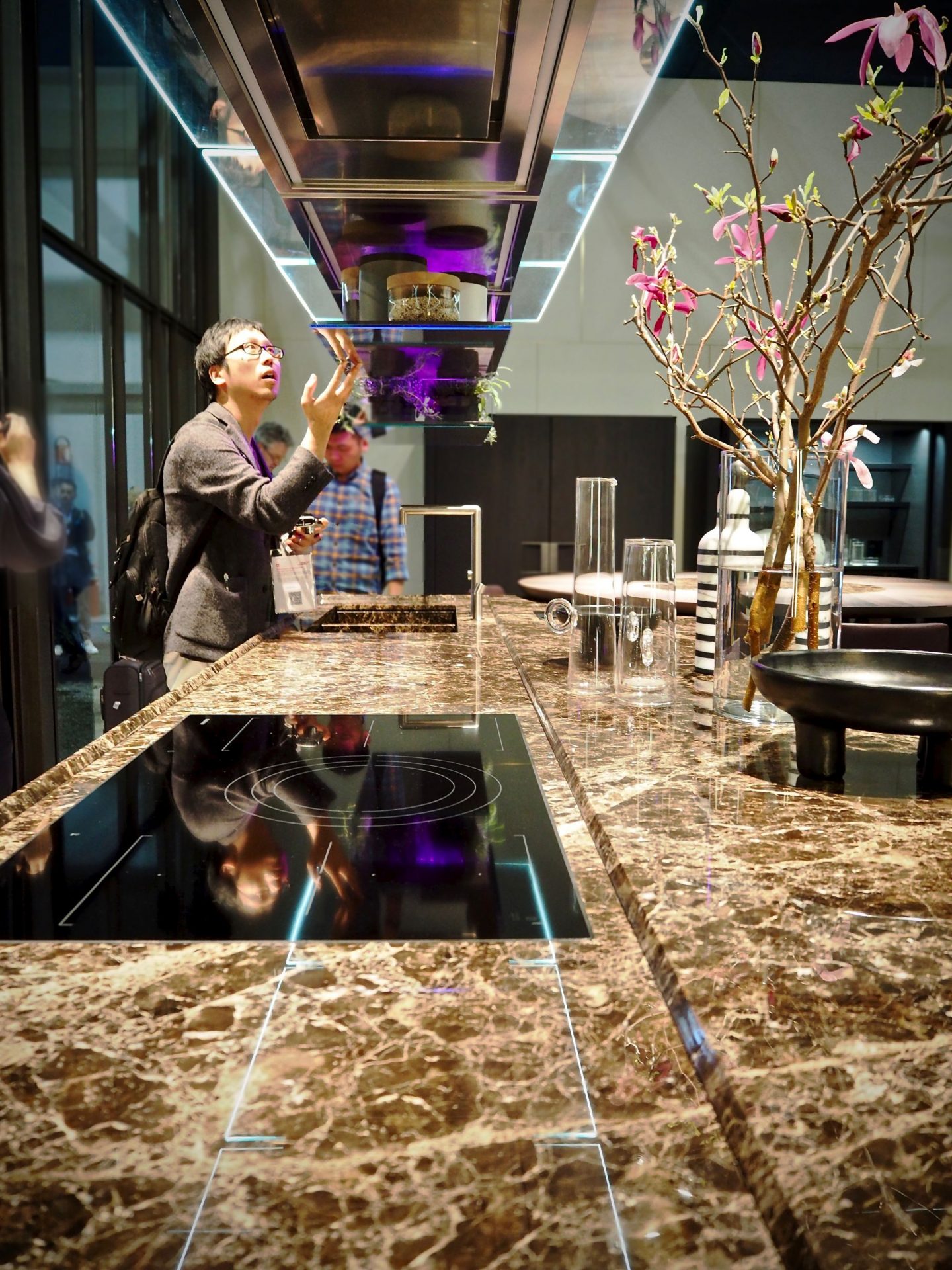 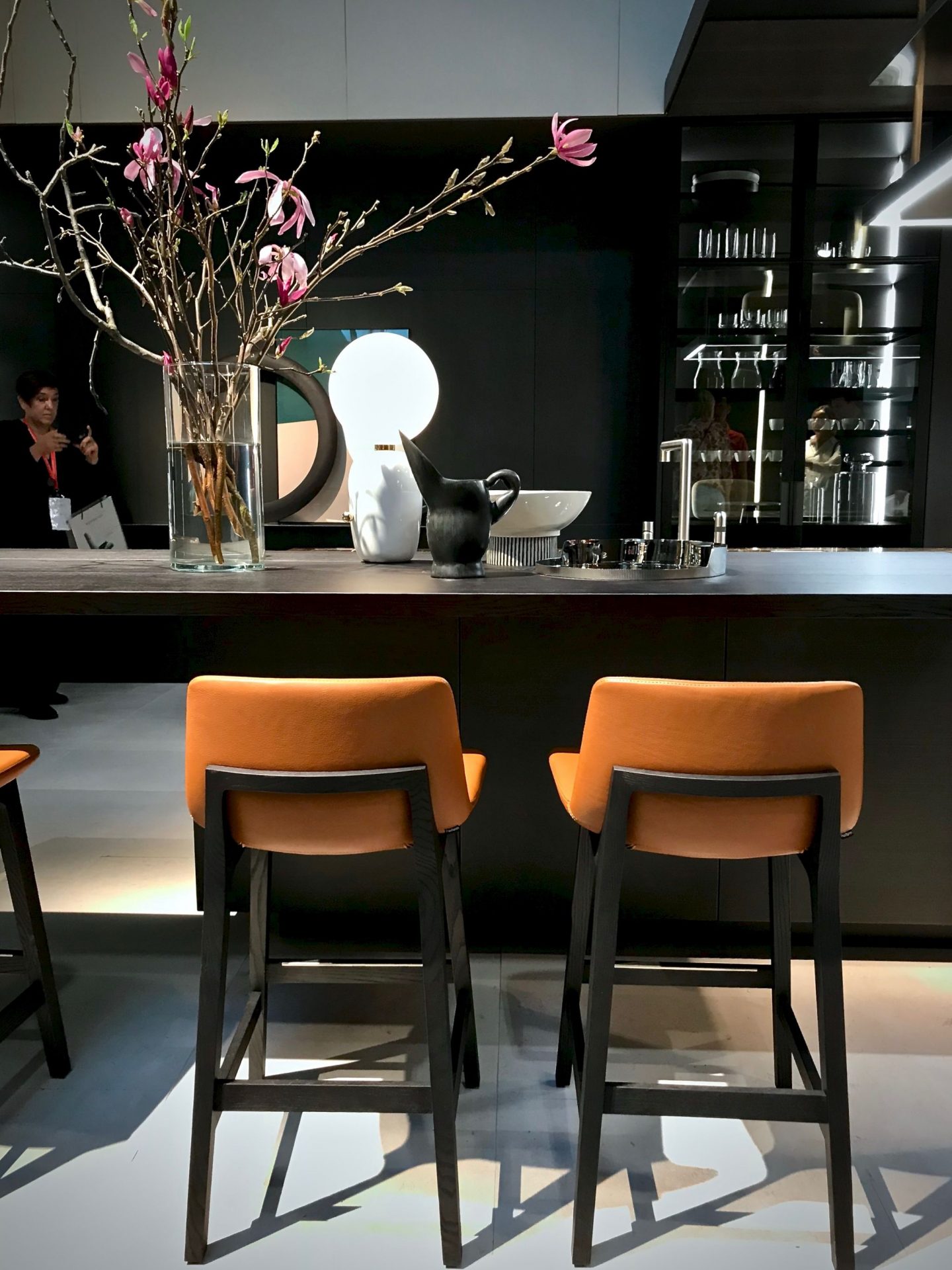 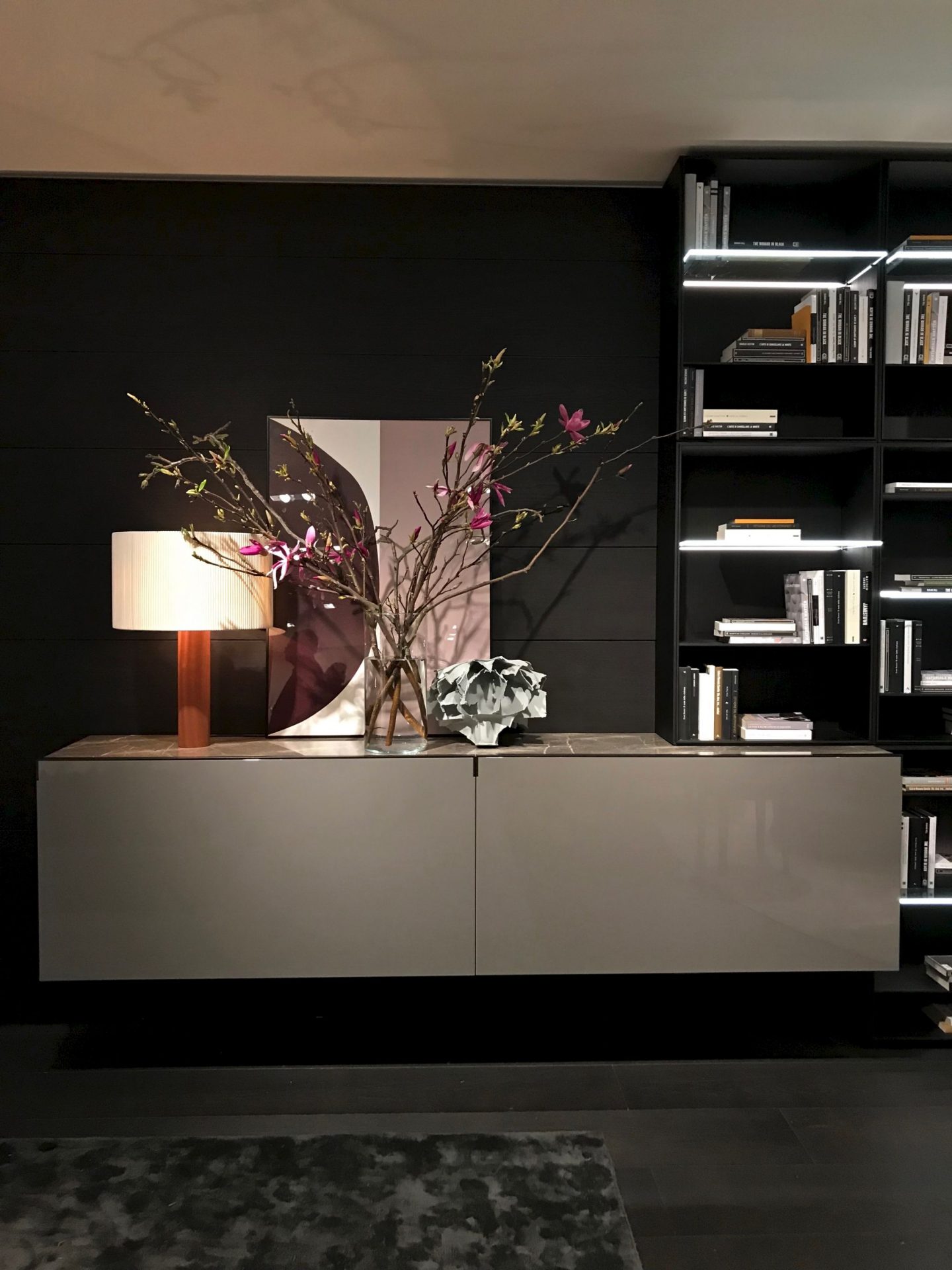 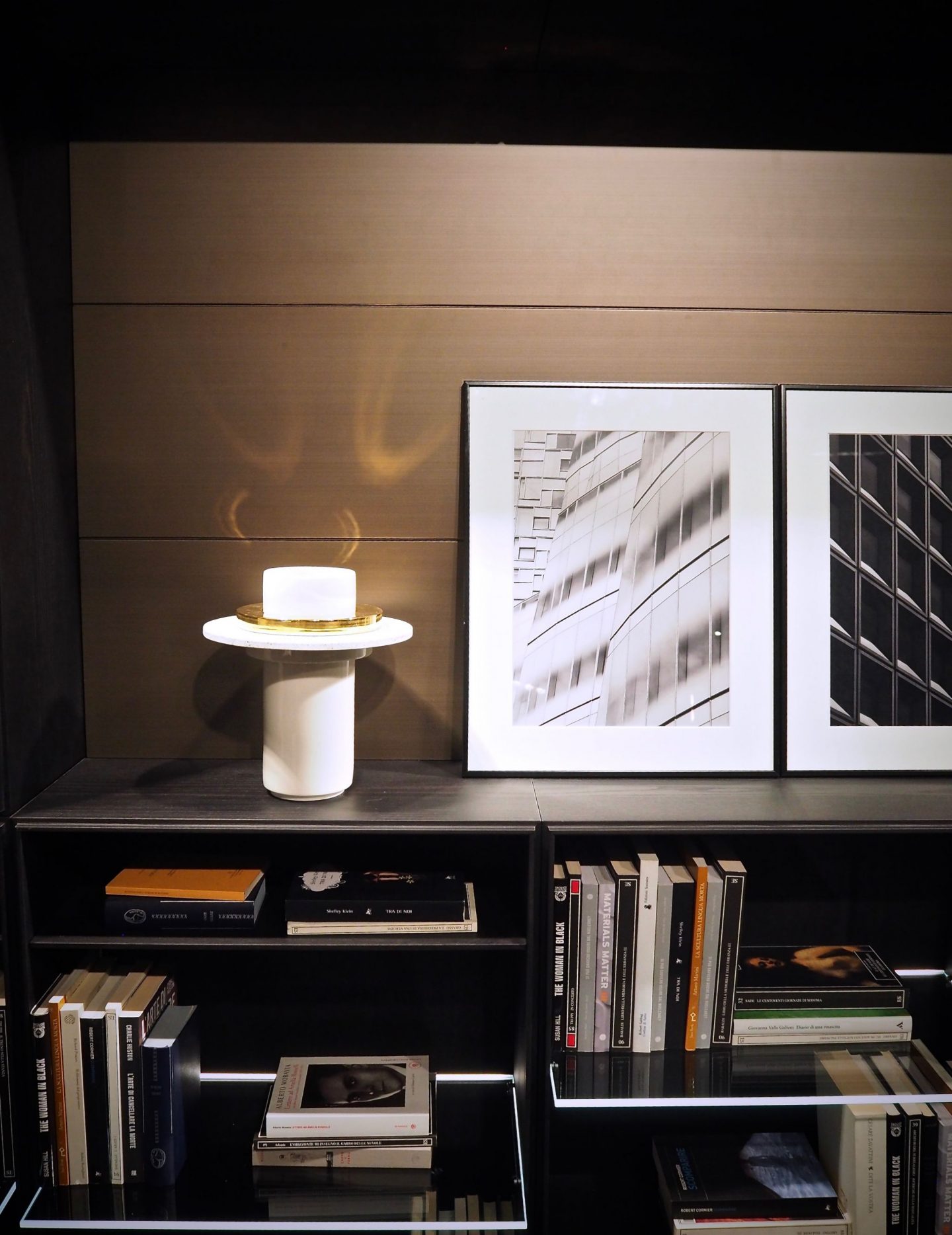 It’s not everyday you fall in love with a bed that’s 40 years old. I mean it’s nearly as old as me! But that’s what happened when I saw the Natalie bed by Flou designed by Vico Magistretti in 1978.  The original version of the bed was designed with the headboard and cushion covers matching the duvet cover. And for this 2018 limited edition, the fabrics again were matched and this time in Antique Gold geometric fabric. That big hit of colour and a geometric pattern just called to me, and I couldn’t resist. Geometric patterns were still strong across the halls of Salone. 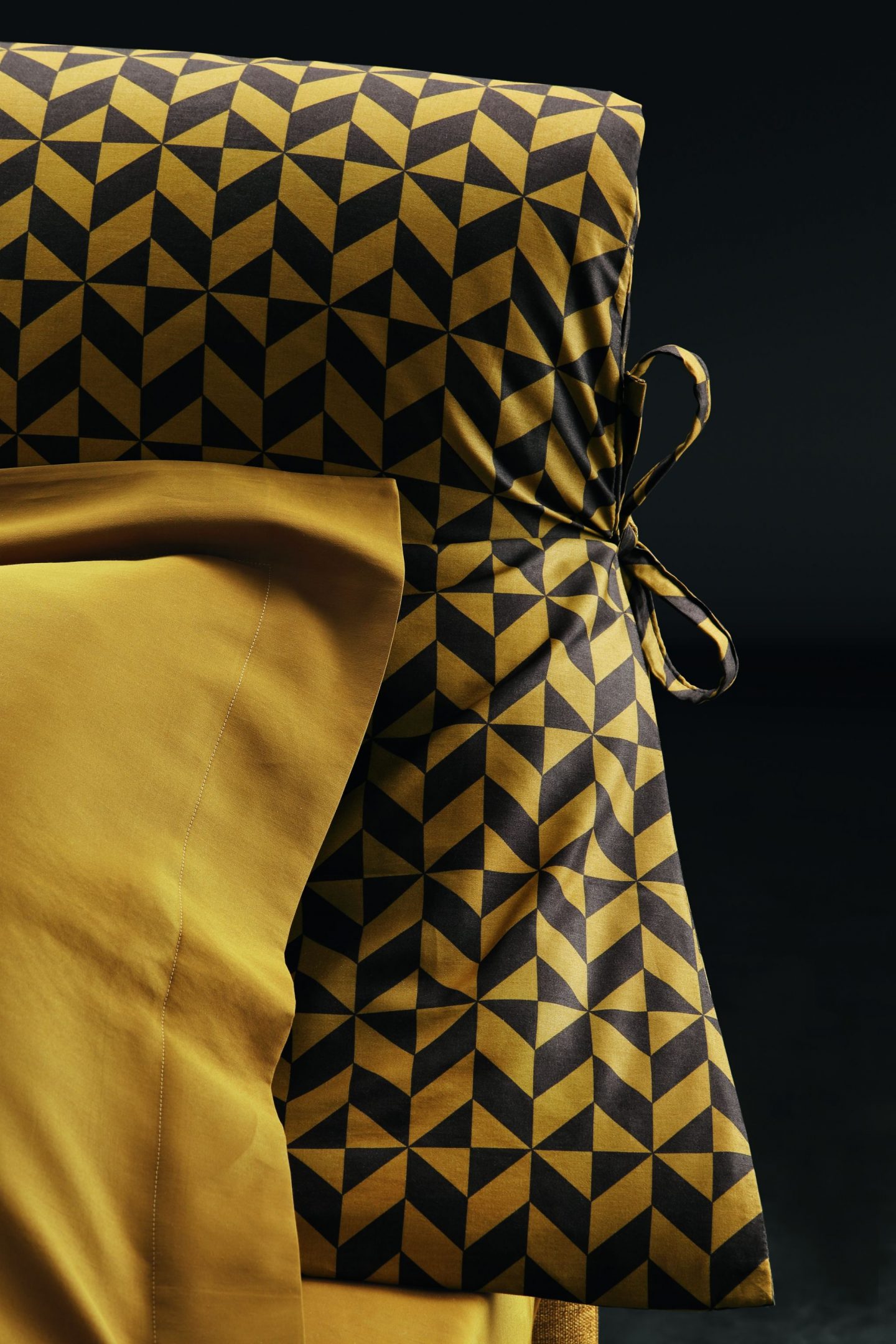 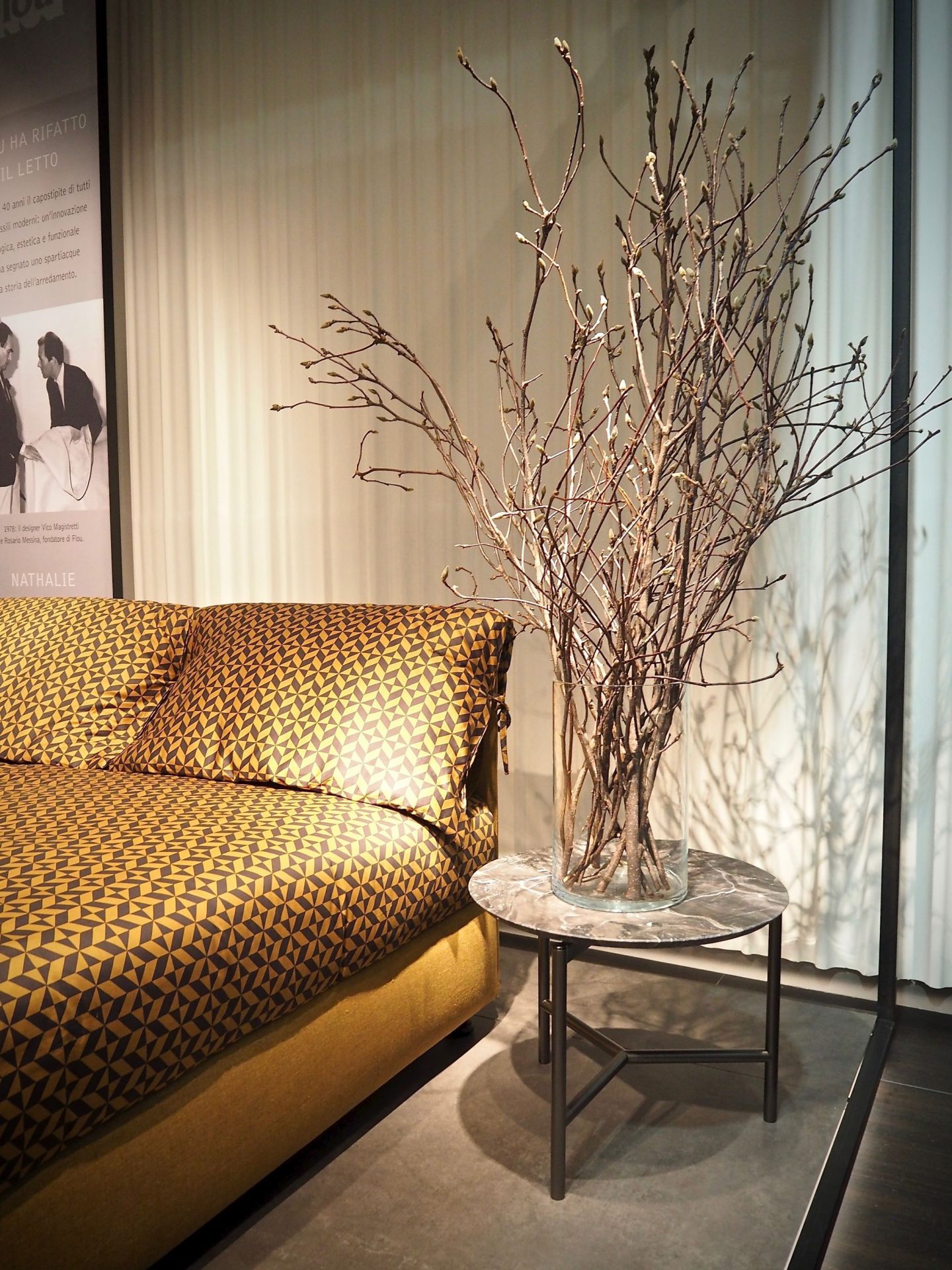 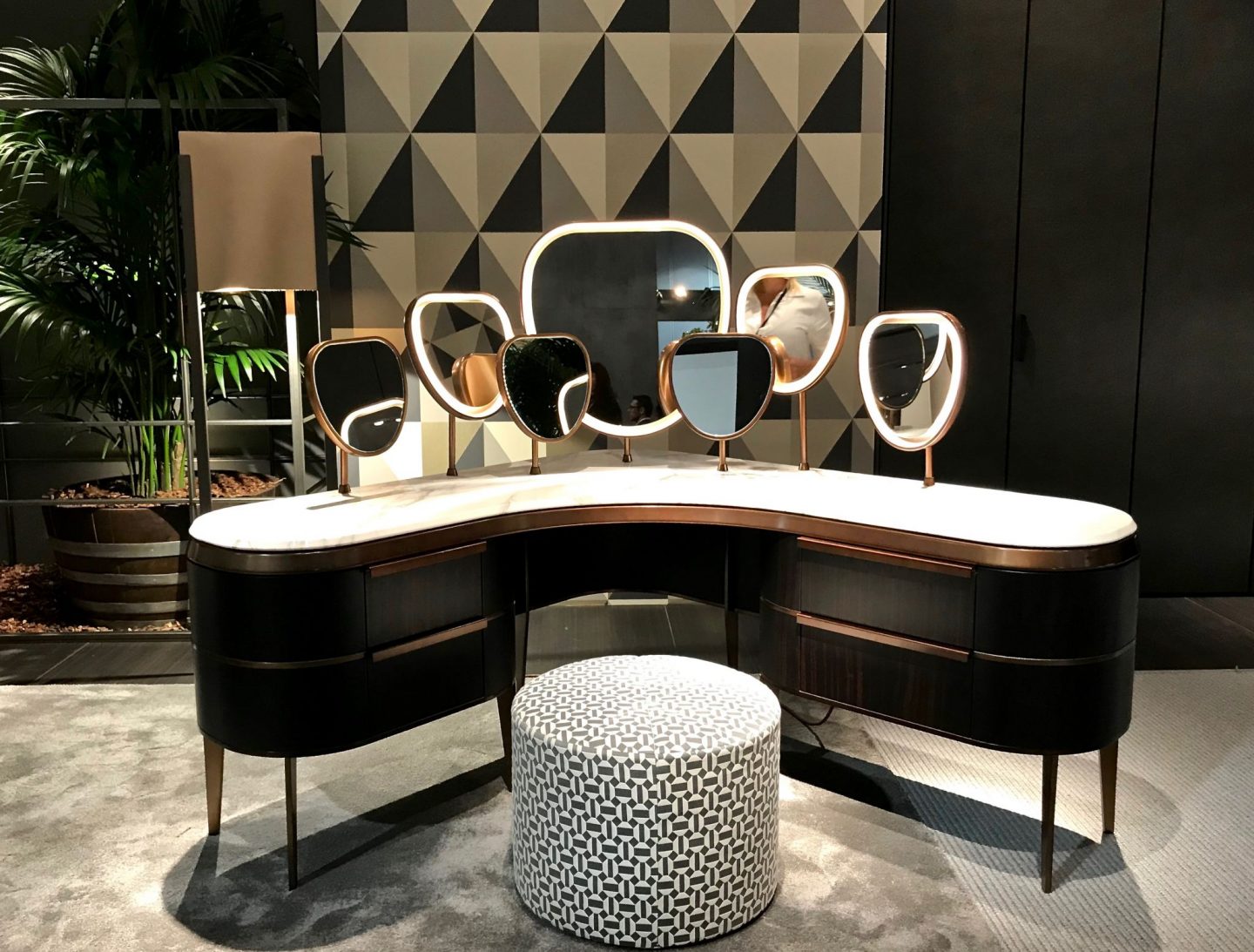 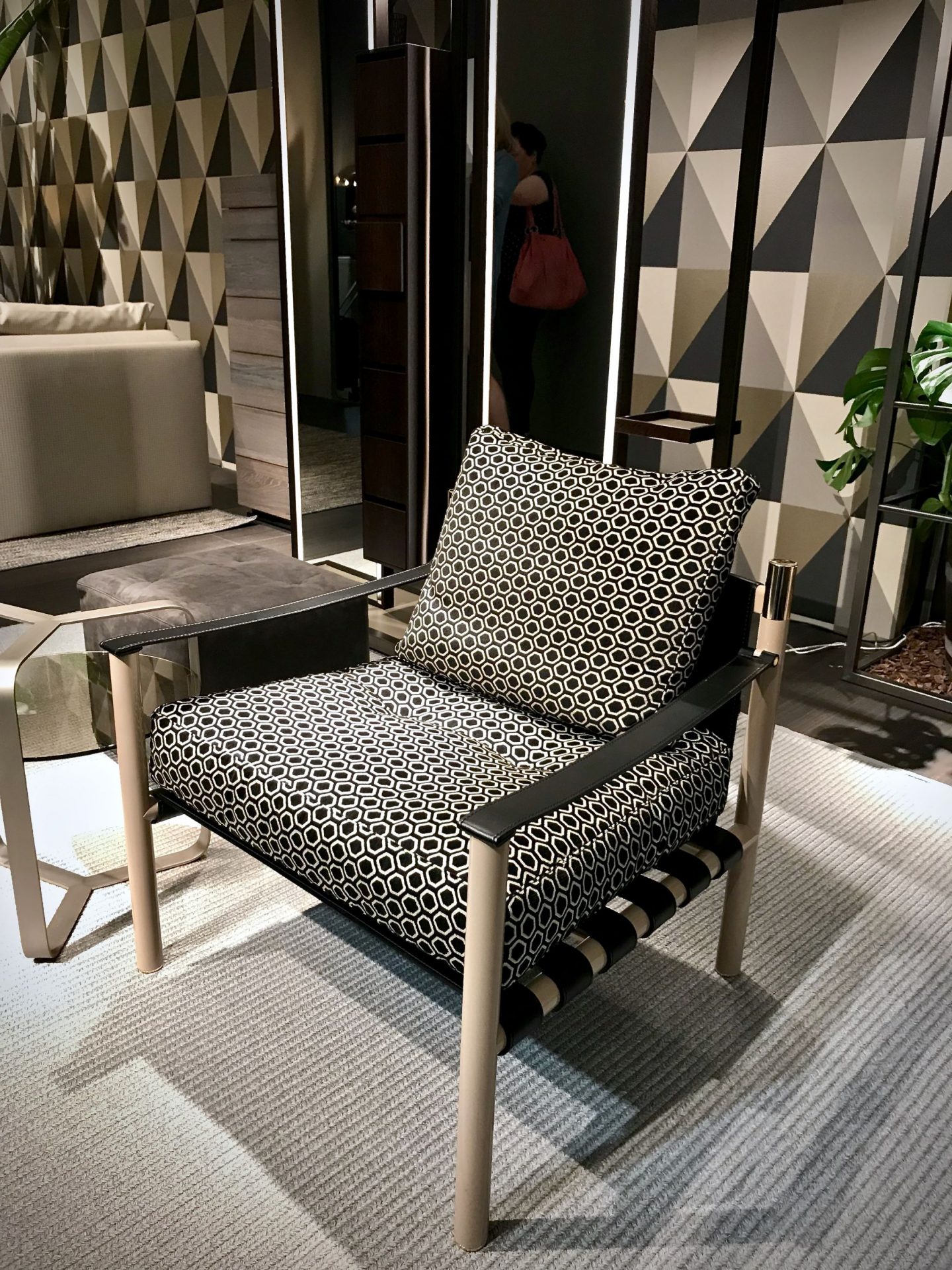 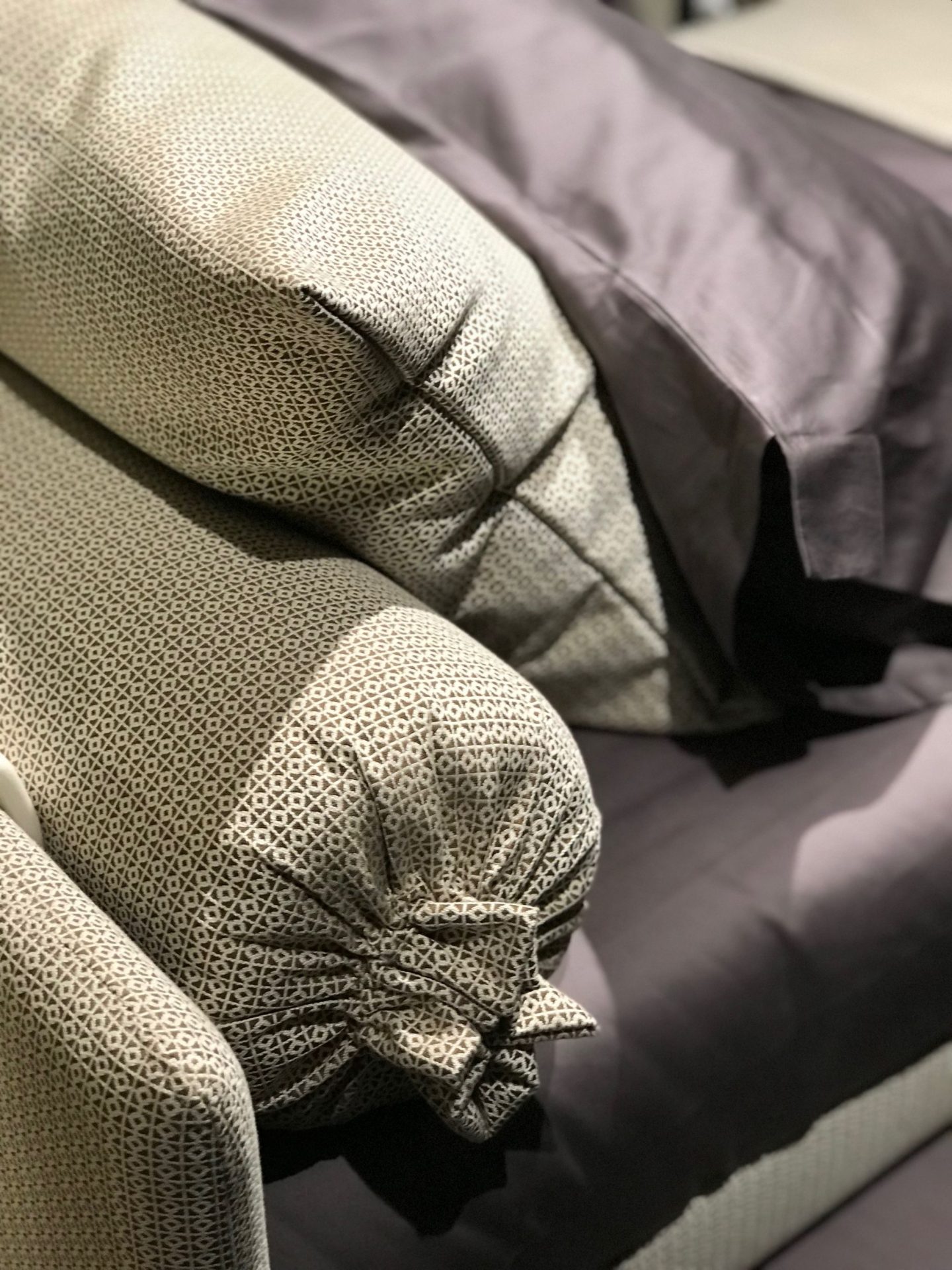 For more than 150 years, Walter Knoll has been creating quality, timeless furniture. Markus Benz CEO of Walter Knoll walked us through the new product releases and also shared his thoughts on design from Bauhaus to the new editions in the collection like the Onsa chair designed by Mauro Lipparini. The height adjustable stool of Onsa is a clever little touch that means everyone in the family can find a comfortable position when using it.  Yellow was an emerging colour last year during Milan Design Week, and its appearance has continued to grow. Hints of yellow gold, warm sun-skinned mustard tones and amber hues I spotted throughout Salone del Mobile and the Fuorisalone. Its vibrant, rich, saturated sister tone was used at Walter Knoll in the form of plush textiles and velvets – another trend that isn’t waning is velvet. 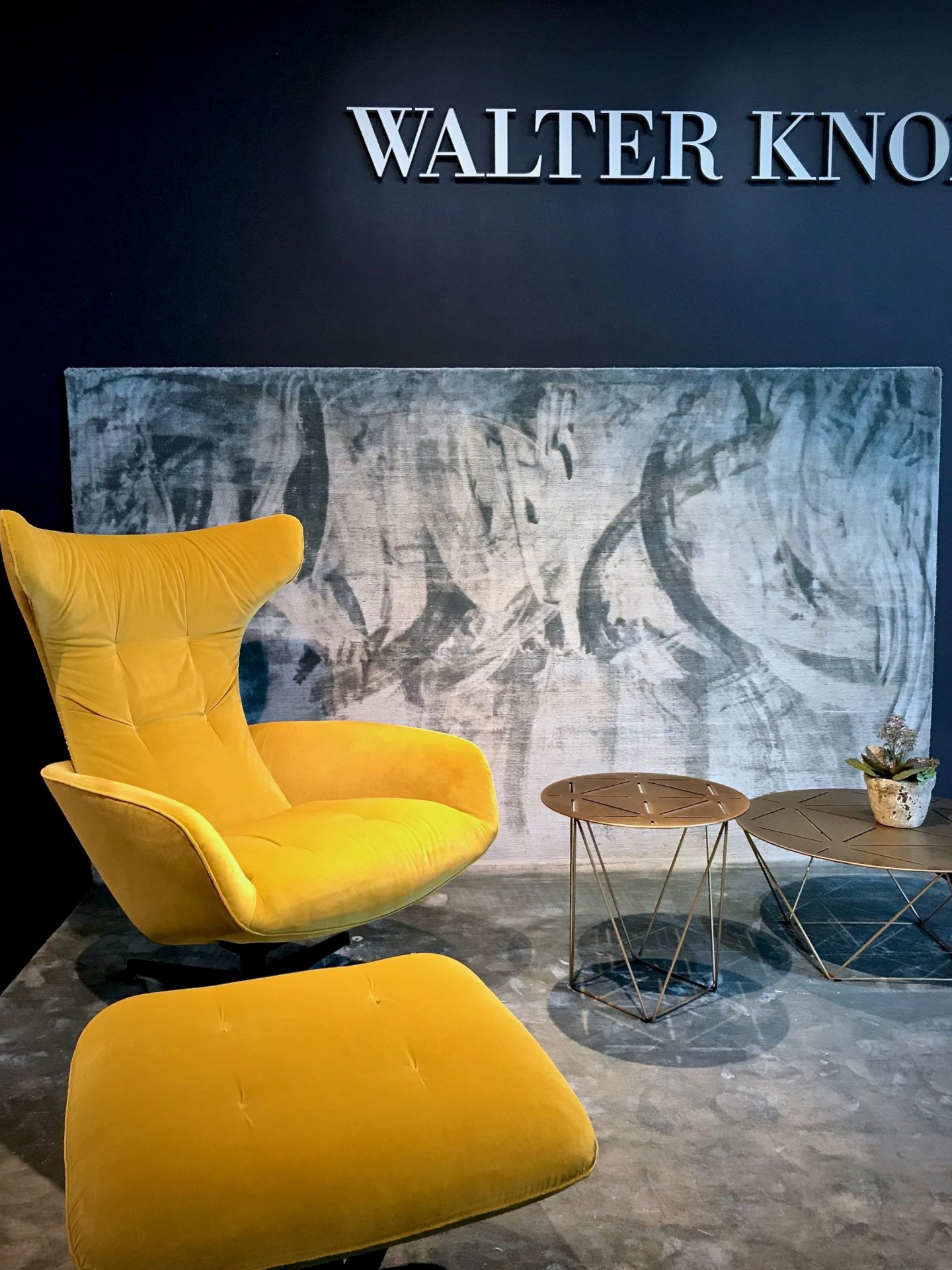 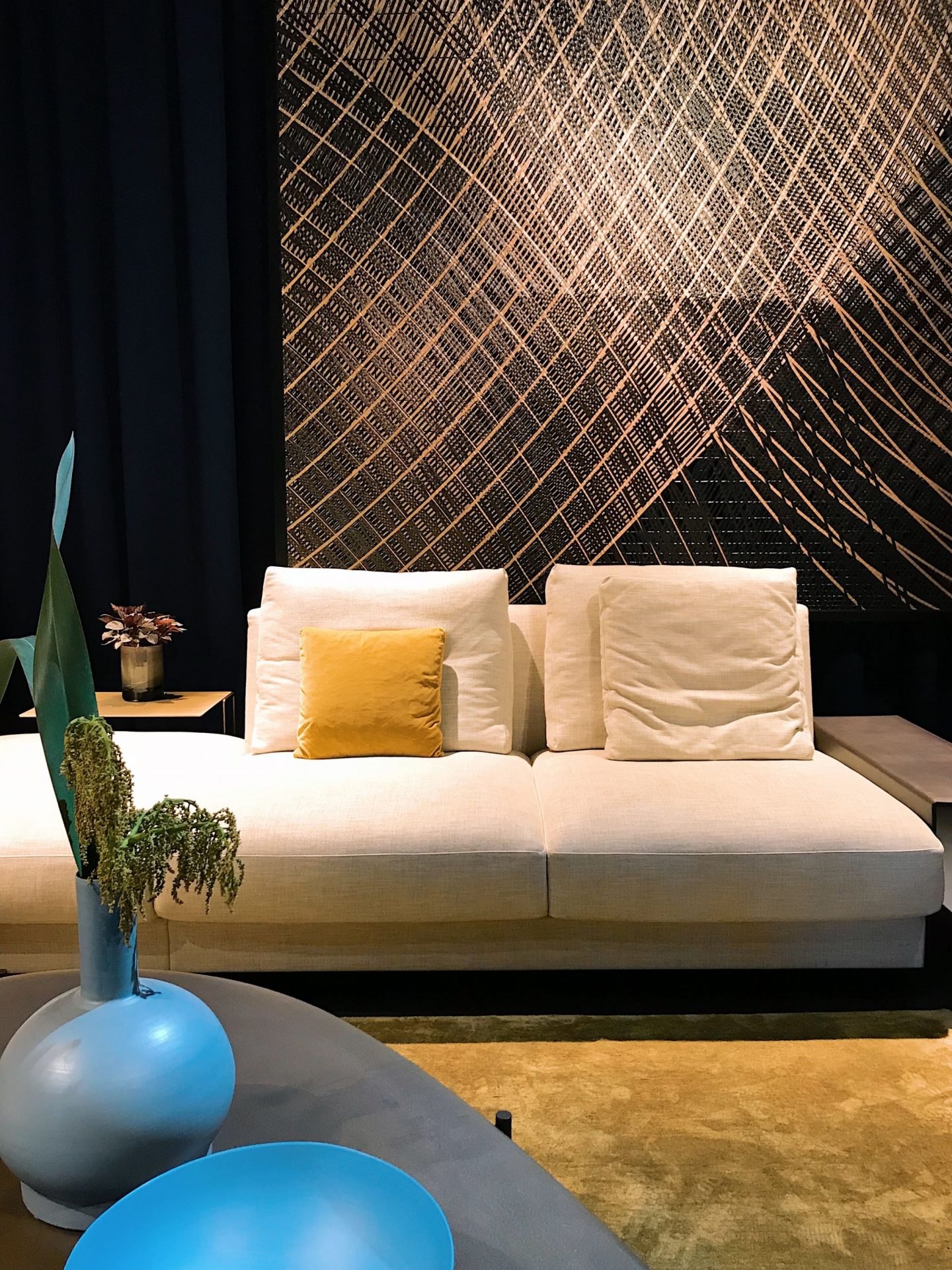 Founded in 1959 from humble beginnings in Puglia, Natuzzi has grown significantly to be a global furniture brand represented in 123 countries.  At this edition of Salone del Mobile, they launched their new collaboration with Dutch designer Marcel Wanders. They might seem like odd bedfellows, but the collection was definitely a meeting of two design sensibilities and an exciting new direction for Natuzzi.

When you think of Kartell, you’ll probably think of iconic plastic furniture. So imagine my absolute surprise when Kartell showed the prototypes for a new series of WOOD chairs designed by Philippe Starck, I was genuinely gobsmacked. Thanks to a special patented process, the curvature of the wood panel has been extended to create a chair with sinuous curves. These won’t be available for at least 18 months, but it showed that Kartell’s brand development is significantly embracing innovation. They also previewed an entirely recyclable bio chair and a smart table that turns into a cooking surface. Innovation requires an experimental mindset, and it seems that Kartell has been questioning and making changes. 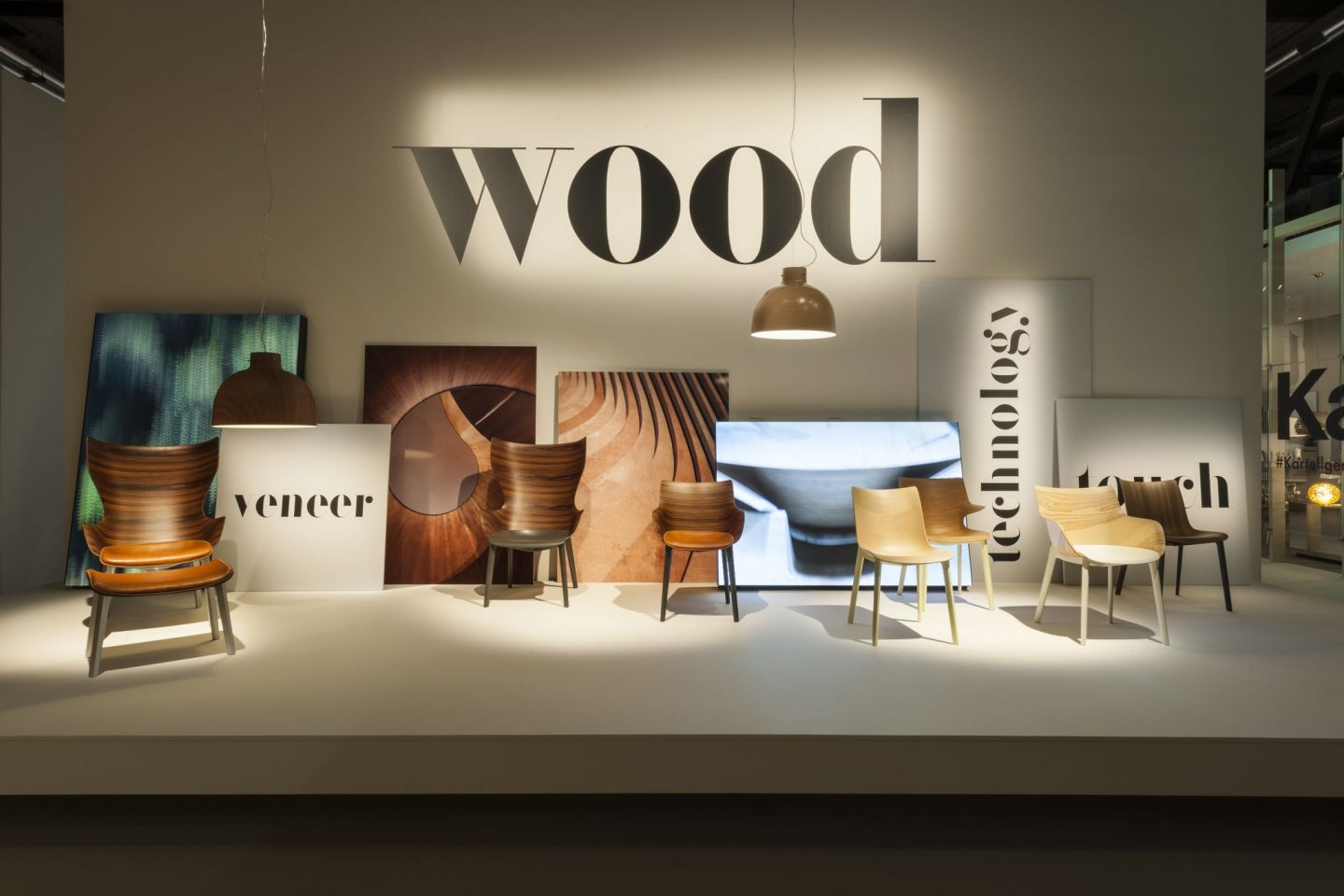 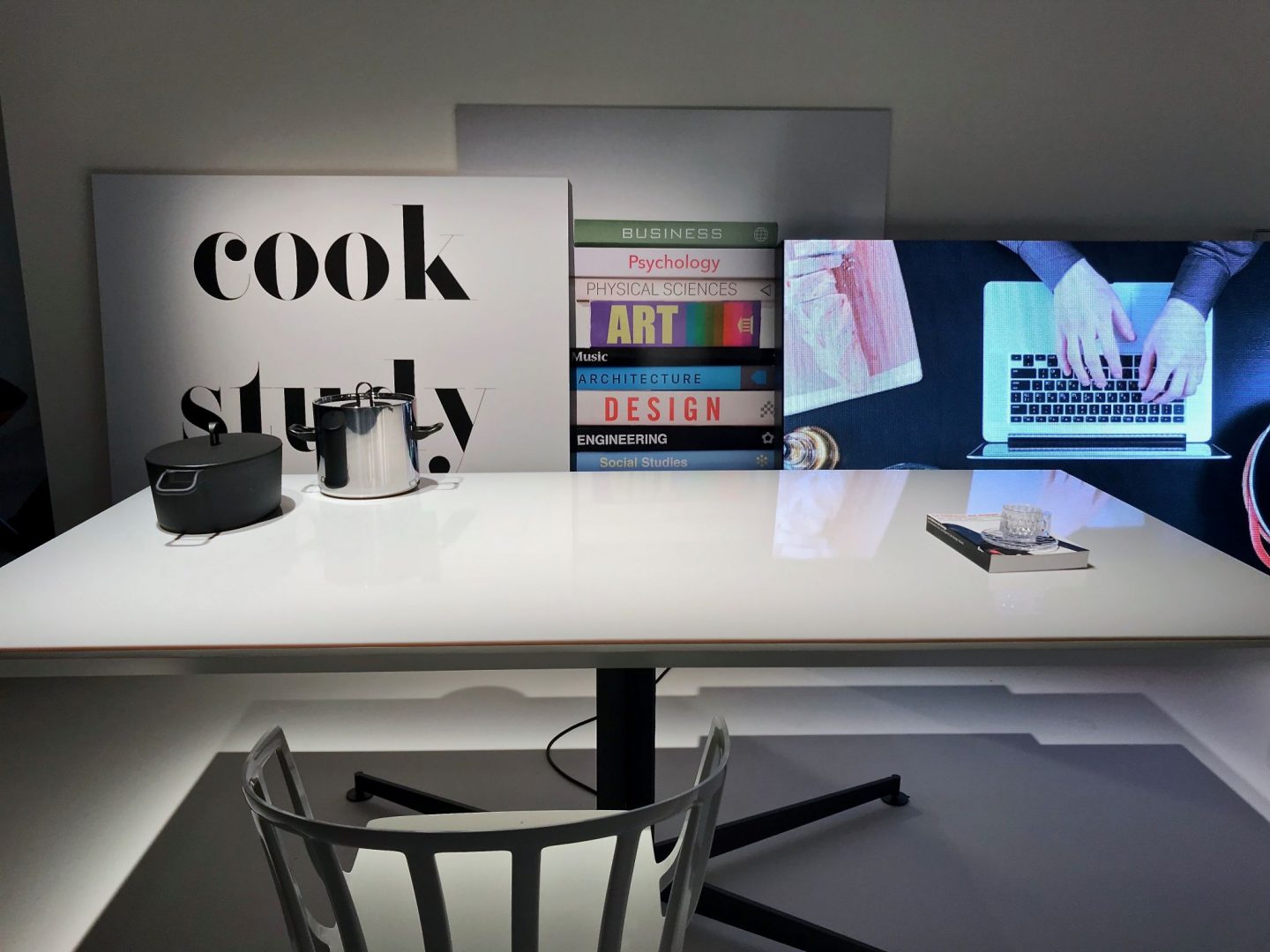 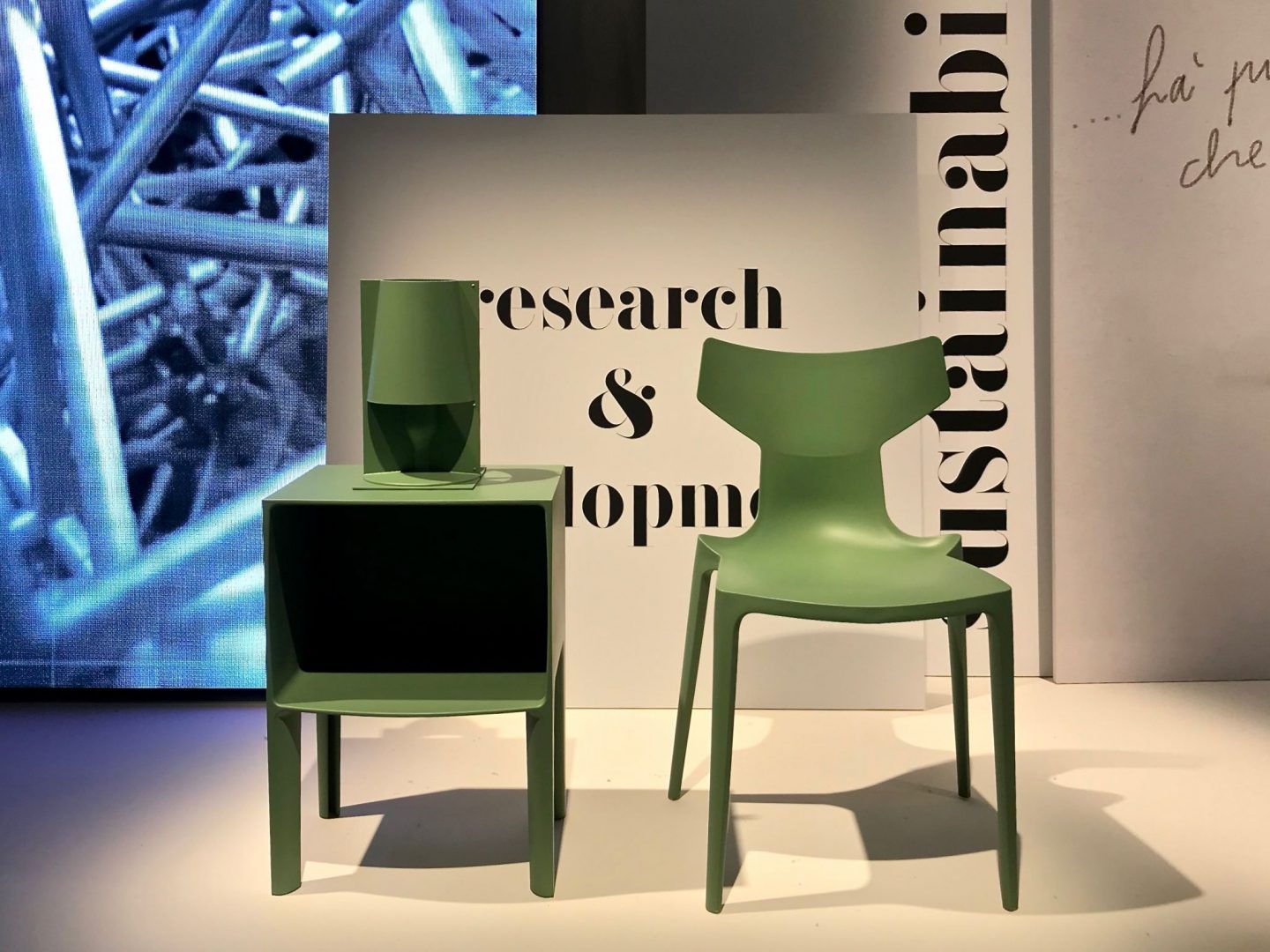 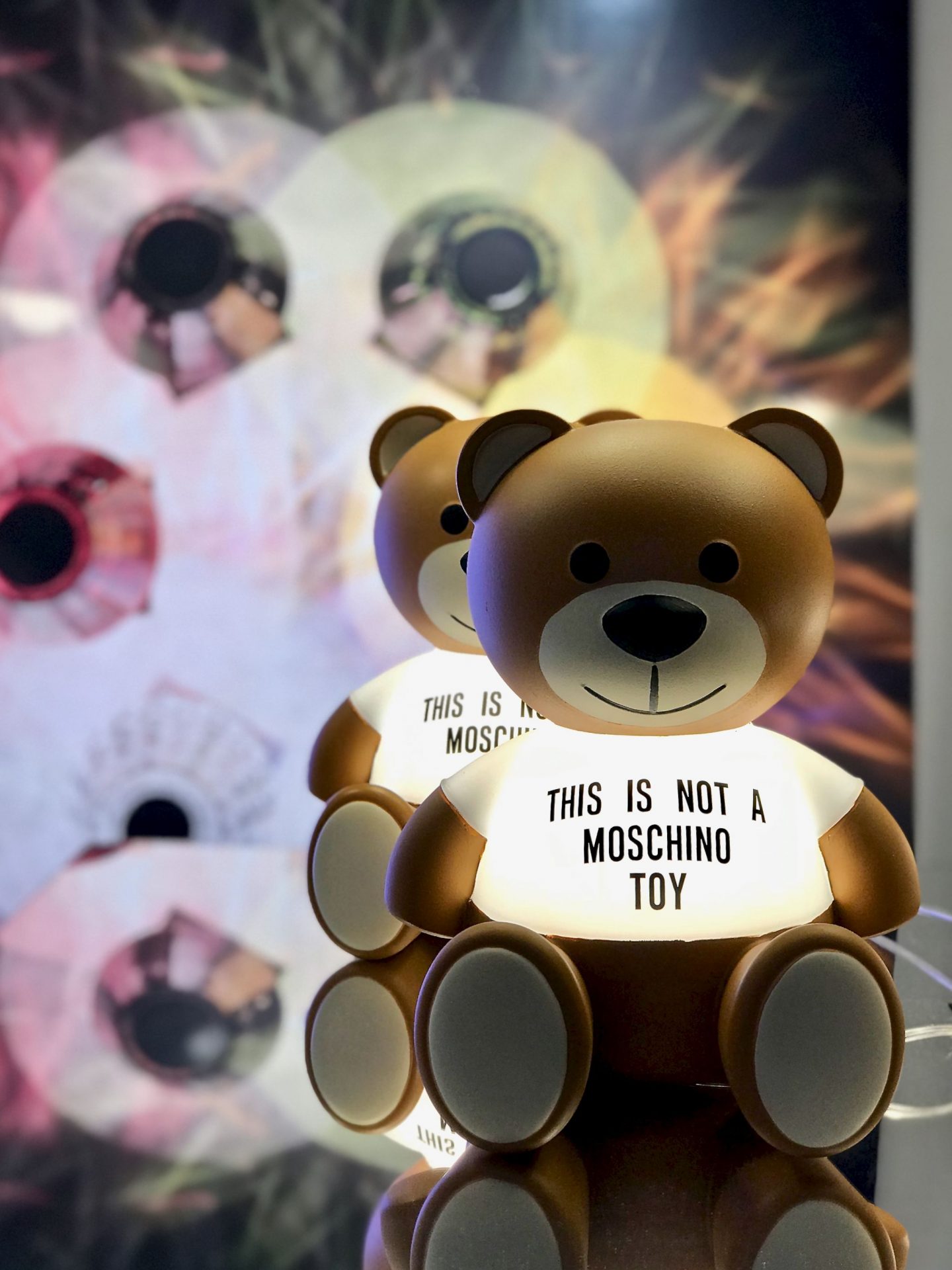 The Boffi and De Padova stand at Salone was incredibly crowded because it was so impressive. If you’re a fan of pared back, simplified design with slim profiles and luxurious finishes than these are the guys for you. I’ve always had a soft spot for Boffi baths and they showed the Fisher Island bath by Piero Lissoni in a deep brown marble, keeping with the move towards warmer, not cooler colour families. If my floor could take the weight this bath would definitely be a contender for my renovations later this year. 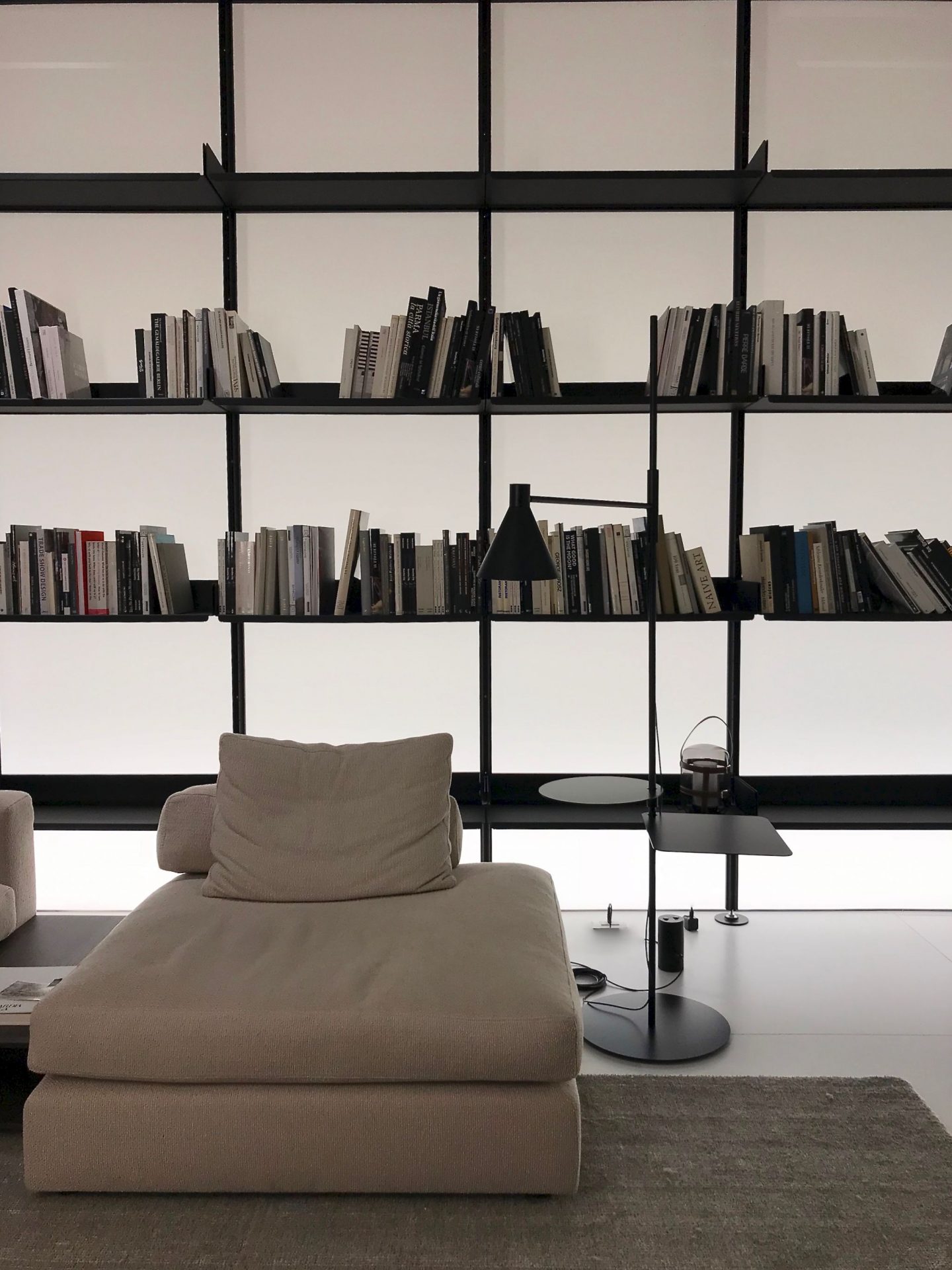 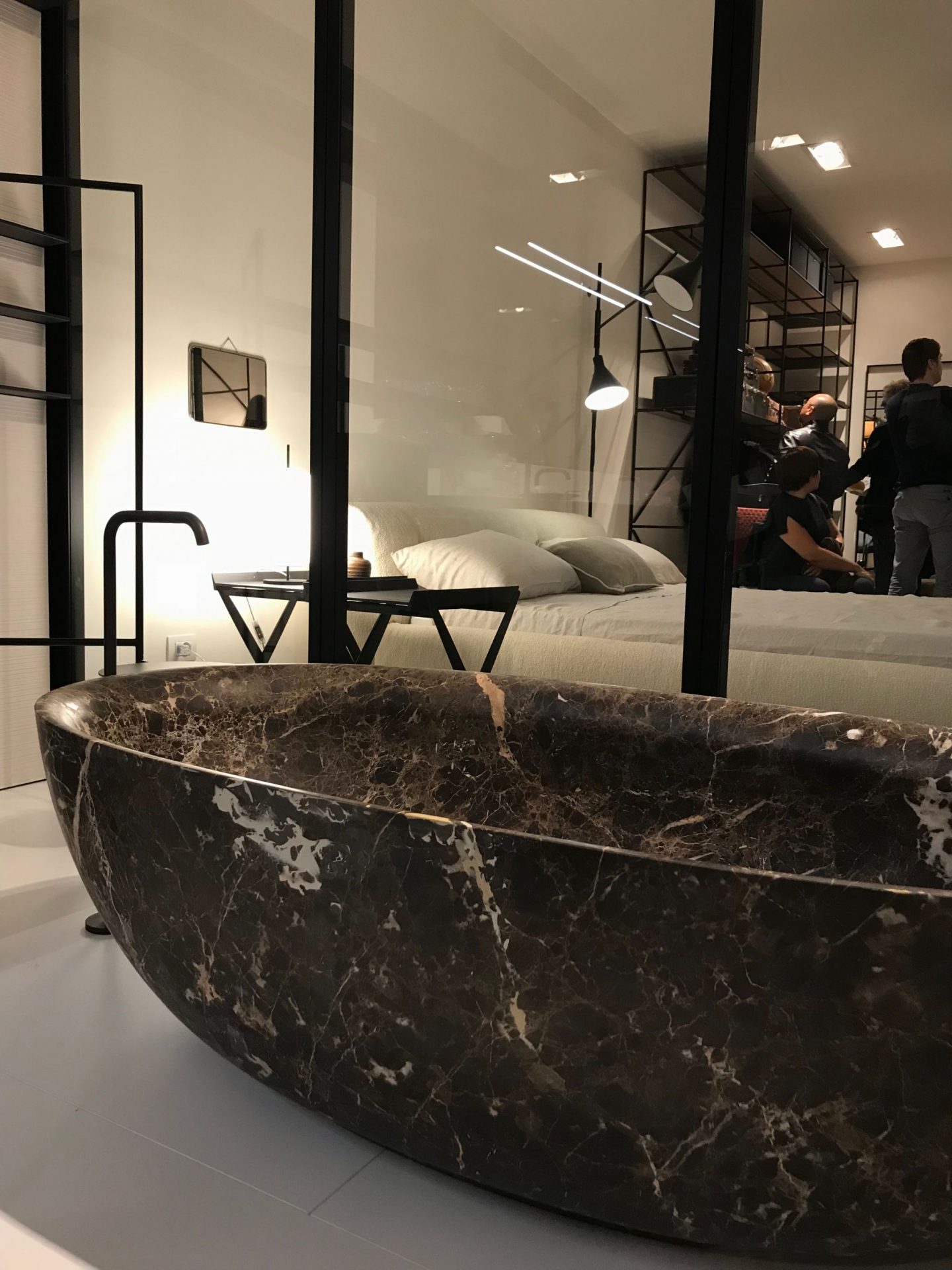 Scavolini are well known in the kitchen and bathroom world and their collaboration with Diesel at the 2016 edition of EuroCucina got me very excited. With so many highlights from Salone del Mobile to choose from, this year the big news from Scavolini was its new product, Box Life, a collaboration with international design studio Rainlight and architectural and engineering practice HOK. Box life is a modular system perfectly suited to small urban living. Using a system of retractable, folding, sliding or bottom-hinged flap doors your space can instantly conceal the kitchen, laundry and even the bed, to keep things neat and tidy. Perfect for city dwellers where square footage is at a premium. I had the fold up “Murphy bed” demonstrated to me and could see the appeal instantly, perfect for spare bedrooms that also double as home offices.  As well as true flexibility for those who thrive in small minimal homes. 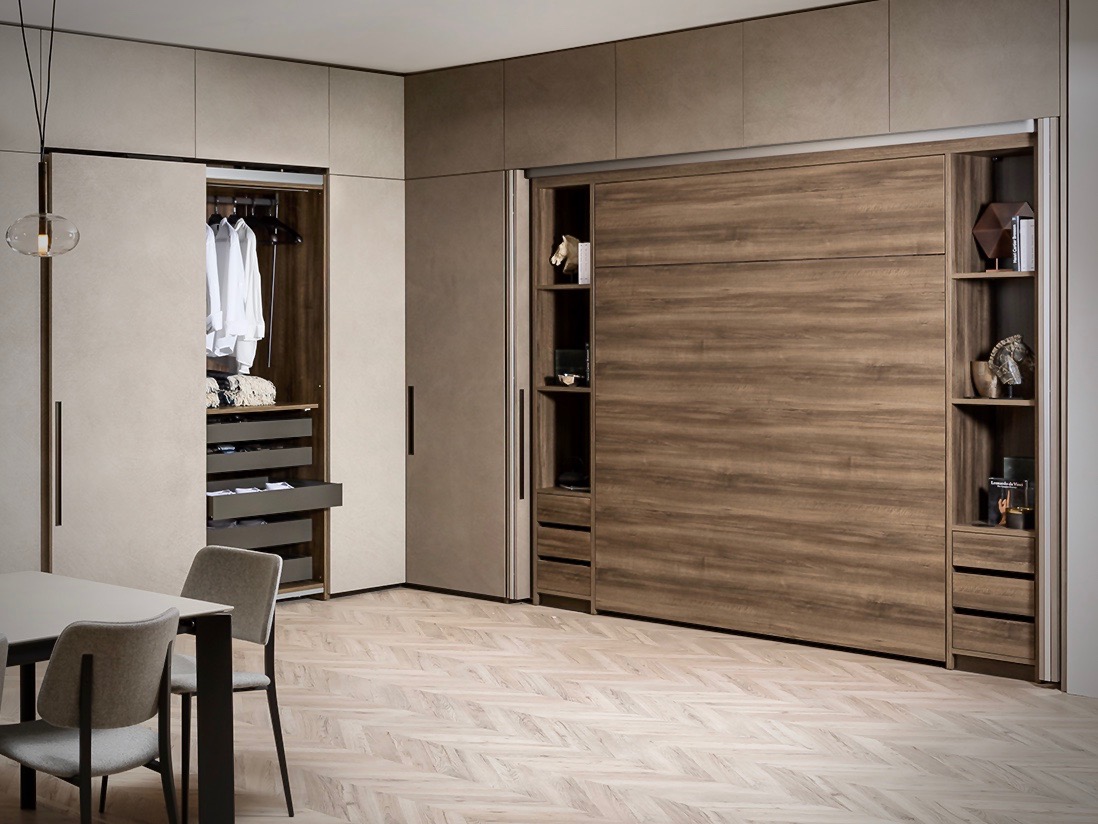 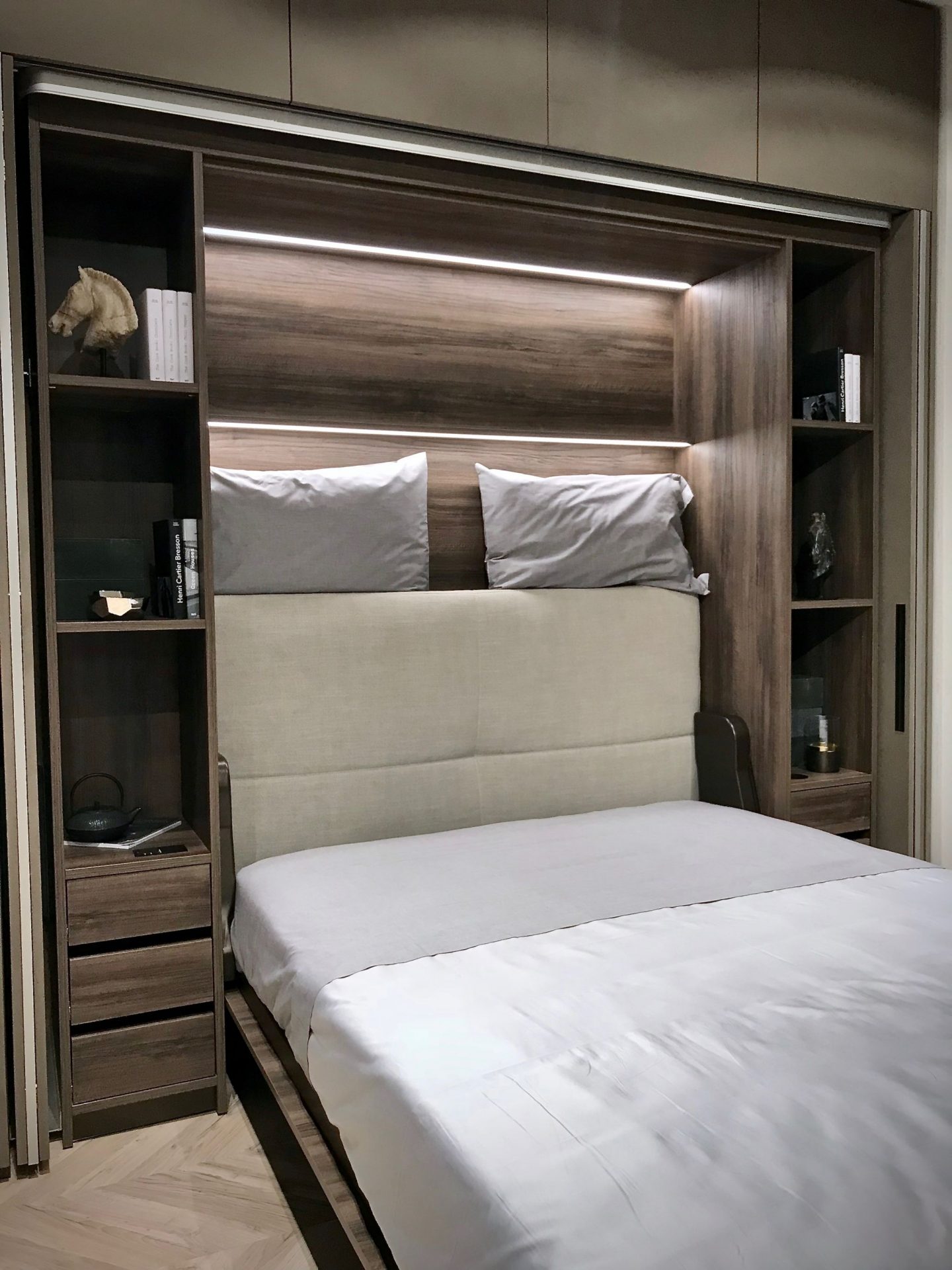 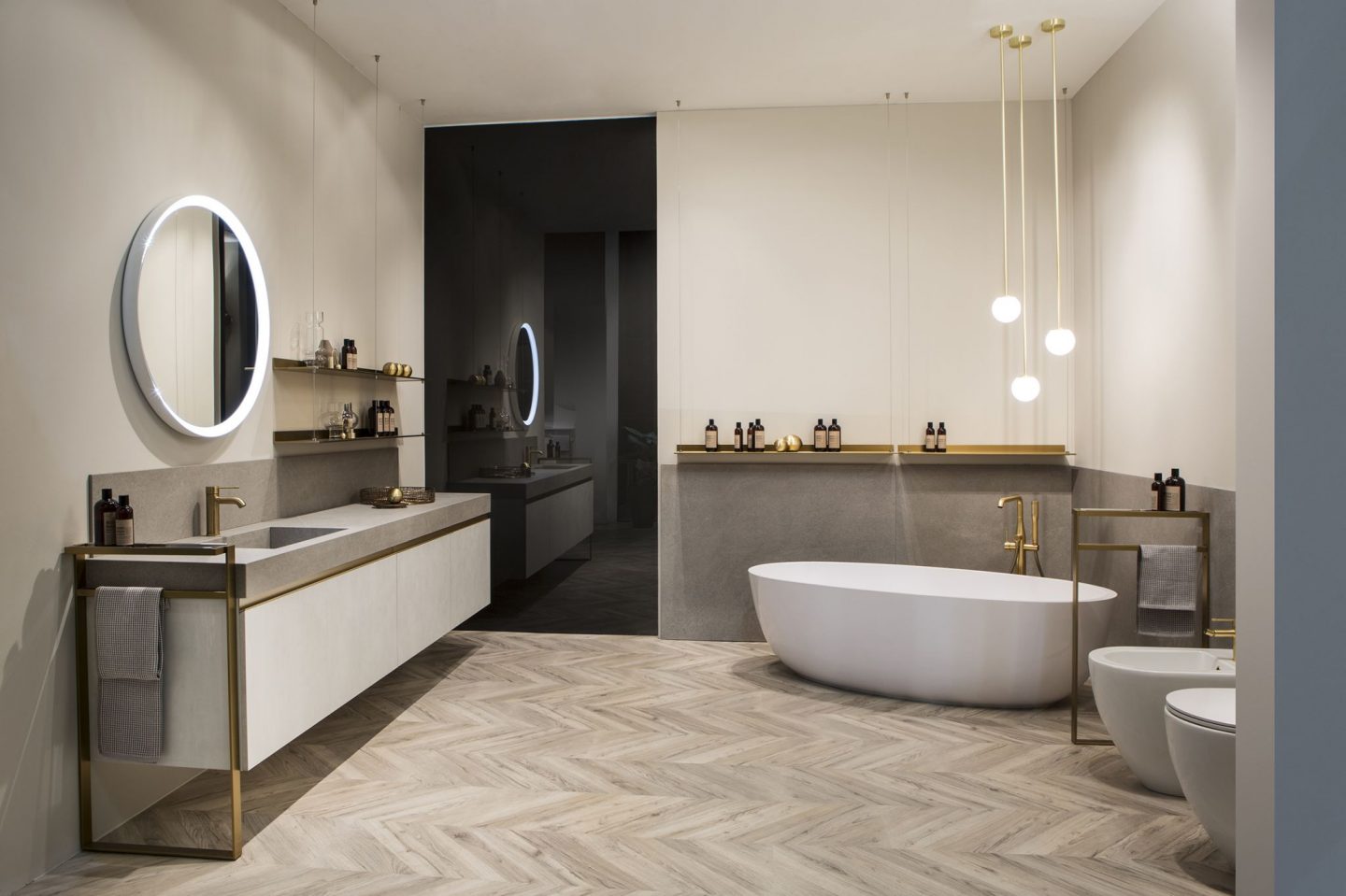 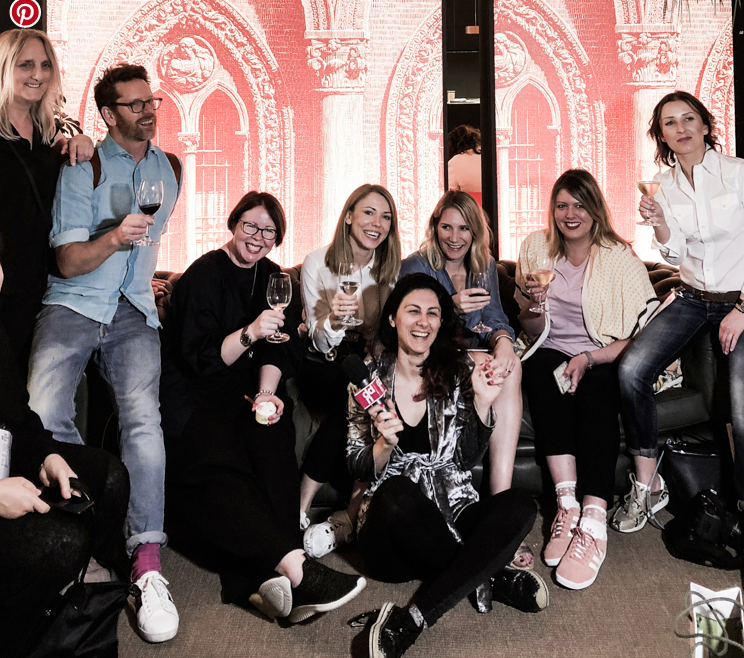 One of my highlights from Salone del Mobile blog safari tour was spending time with the fantastic interior bloggers taking part, people who are at the top of their game, and who were brilliant to hang out with. If you get a chance you should stop by and see their highlights from Salone del Mobile – Niki at My Scandinavian Home, who I met in Paris a couple of years ago, the always wonderfully fun and insightful Holly at Decor8, Agata at PassionShake who has an incredible eye for styling, Stefan at TrendStefan who’s blog is in Swedish but will soon be in English. Also attending and seen above were Desiree from Vosgesparis and Ula from Interiors Design.  Also pictured is our wonderful host Francesca Russo. Design Diffusion have released a video report of our adventure which is viewable on youtube here.

I hope you’ve enjoyed my highlights from Salone del Mobile if you’d like to take a look at my visit to Milan last year, you can see it here.

This I was a guest of Design Diffusion and this is a sponsored post, although all thoughts and words are my own.

You may also enjoy: