You won’t have been able to escape the fact that I have been to the epic trade show KBIS in Orlando Florida with Modenus as one of their ‘designhounds’. But I’m not quite done on telling you all about the inside track on the biggest Kitchen and Bathroom Industry Show in the US. You’ll have read already (here and here) about how big everything was, how technology is making our lives easier and about how health is the new wealth. Now I’m going to show you that not everything that looks good costs megabucks and then I’ll share some of the directional leaning that KBIS had to show style-wise. 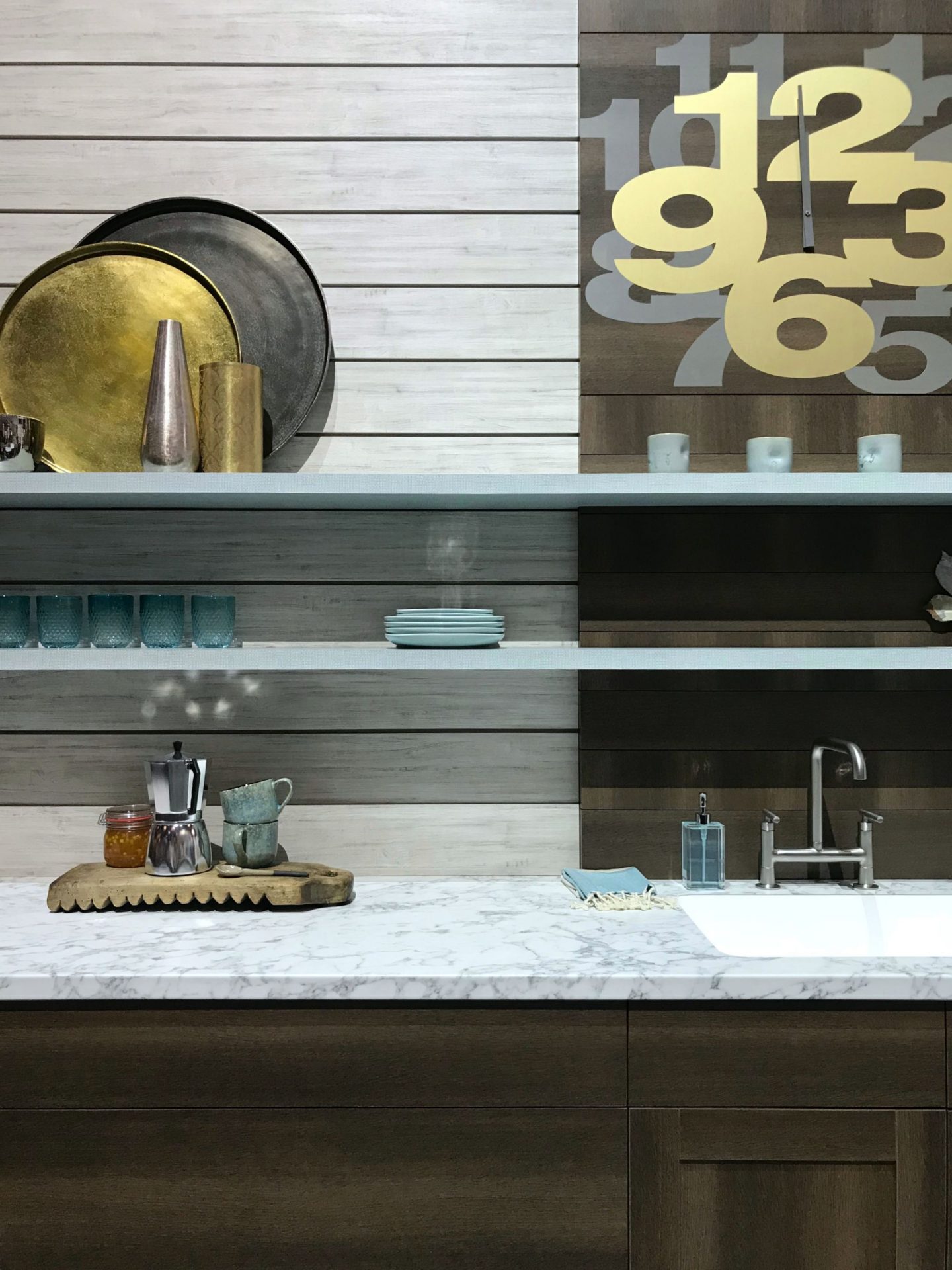 Some products or design elements get a bad rep for no reason other than they are cheaper or they have connotations of being old-hat. Who remembers how we collectively felt about “gold taps” only a few short years ago? How about coloured sanitary ware? So Seventies and a bit naff, right? Well, both of those are back with a vengeance and looking good when styled well. I personally might still skip the avocado suite, but I saw a new version of a green bathroom collection only recently, so I’m not going to completely dismiss it. I just won’t have one, thank you.  Another product that gets dismissed far too readily is laminate. Yes, laminate is your budget-friendly friend and if you haven’t been near the stuff in a while, it’s changed. A lot. At KBIS I spent some time on the Wilsonart stand to find out what they had been up to since I met them back in 2015 on BlogtourNYC. If you’re in the UK, you might not be familiar with Wilsonart as they are a leading manufacturer of engineered and decorative surfaces company based out of Texas. However, they are here in the UK. So here’s my two cents worth, laminate has never been better. Honestly, with the design and finish quality continuously improving it is easy to mistake laminate for genuine natural materials. There are silky smooth and textured finishes, antimicrobial protection, enhanced scratch and scuff resistant, it’s stain resistant and durable to boot. Everything you see in the below pictures is laminate. Yes, all of it, including those floating shelves and the shiplap (or tongue and groove). In fact, the laminate on wall surfaces was my favourite discovery, as I’d never considered it for that before. 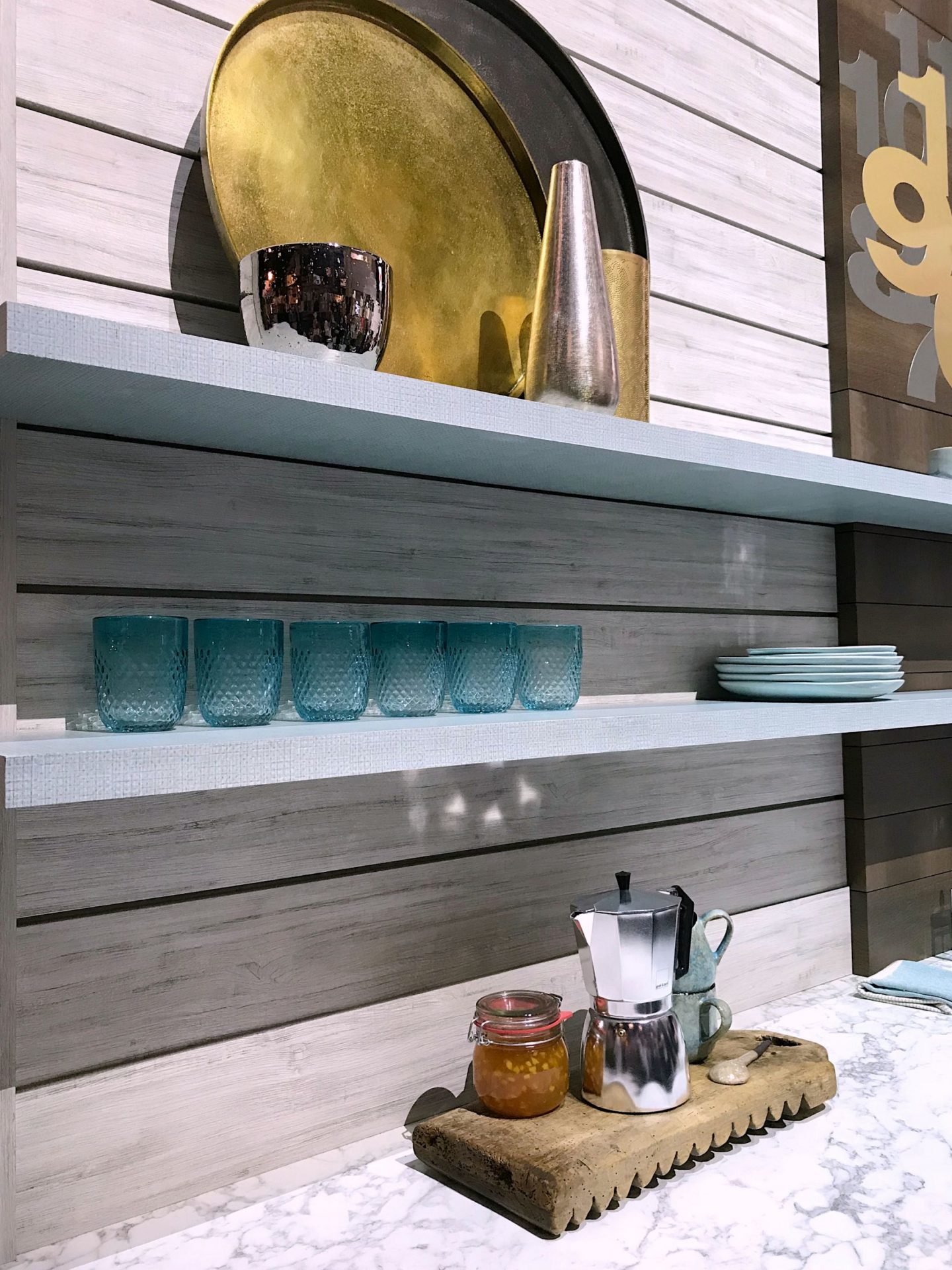 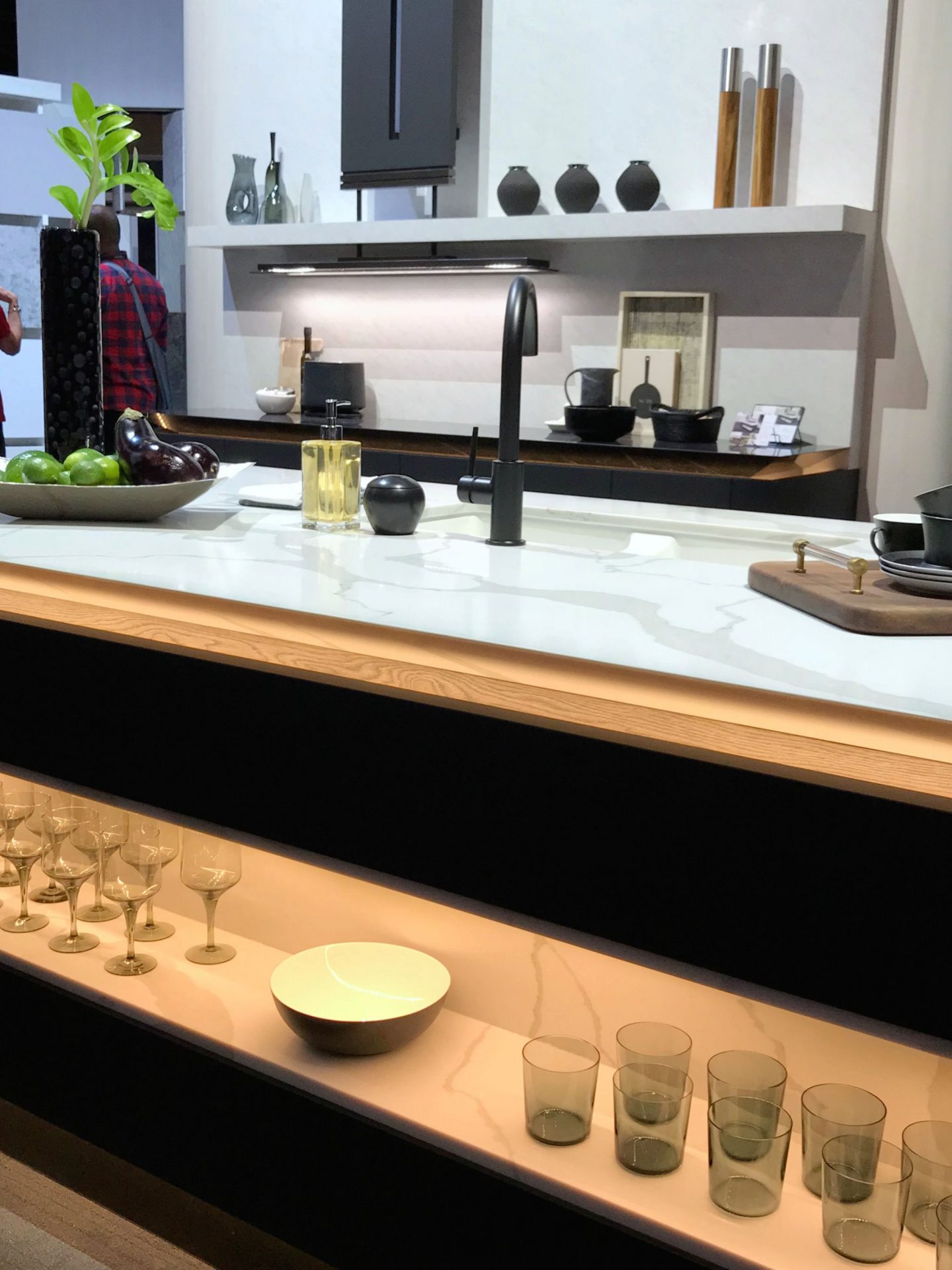 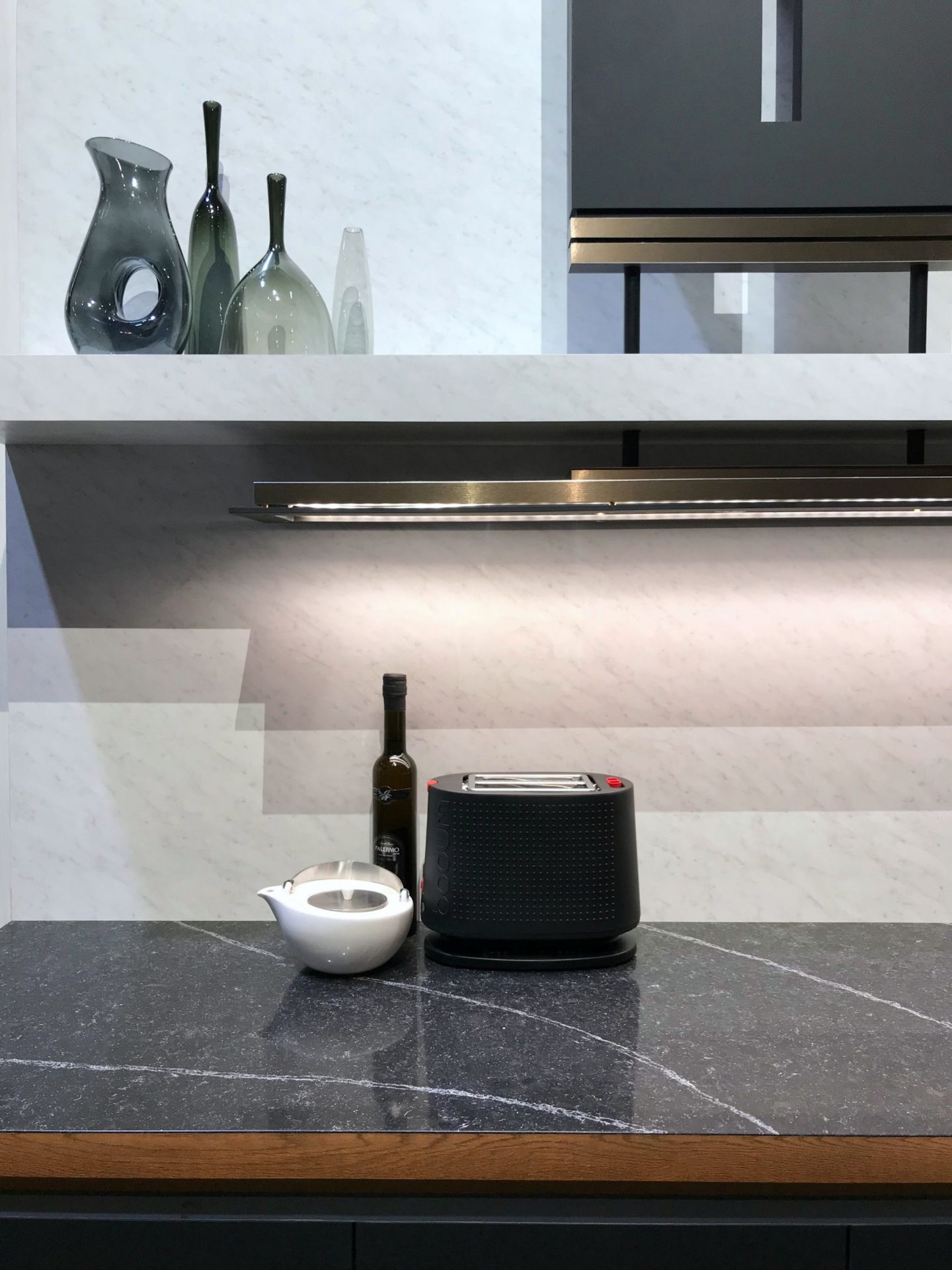 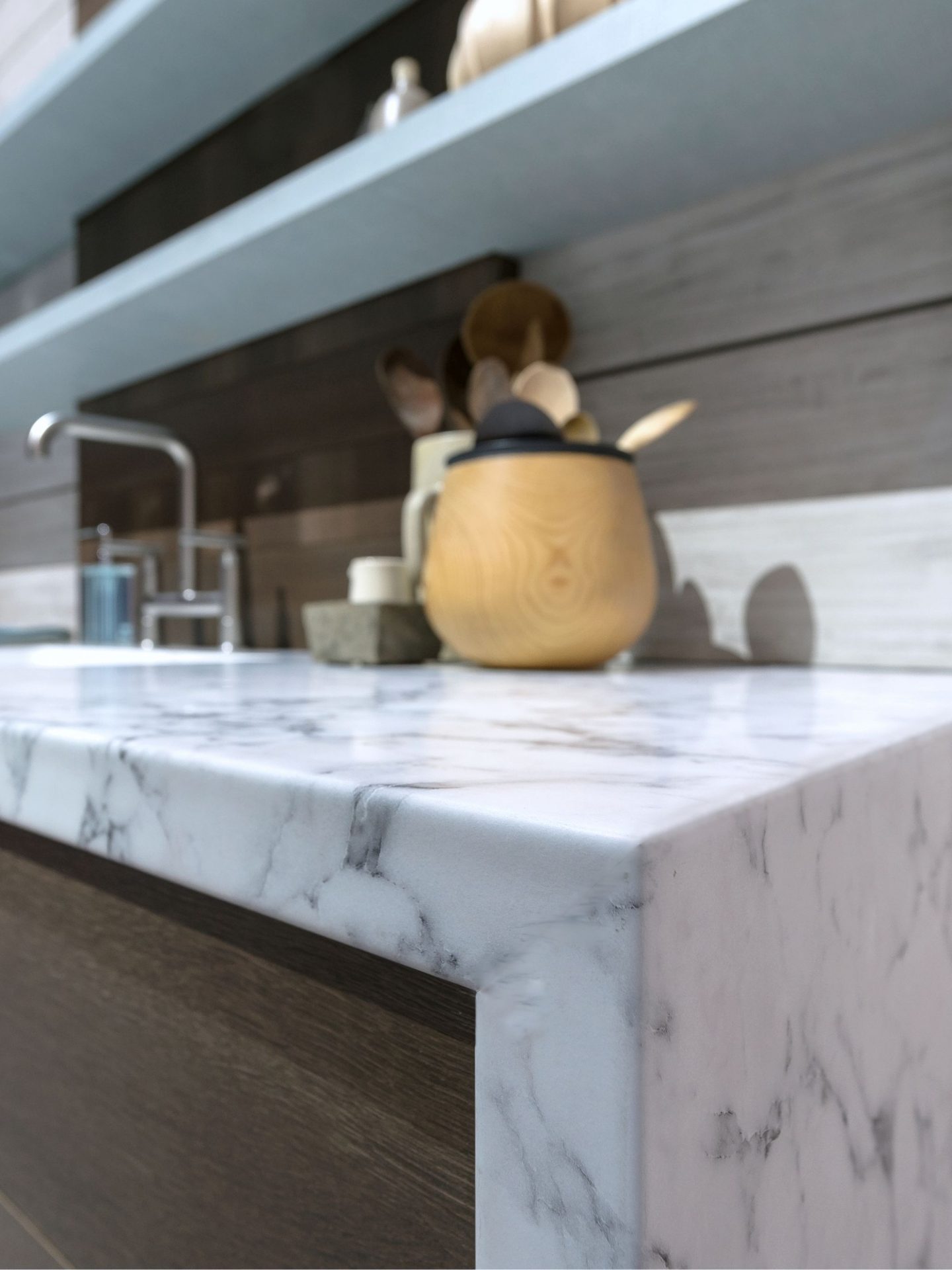 Danny Seo, Wilsonart spokesperson and host of NBC’s Naturally Danny Seo, (I didn’t know who he was, I had to ask!) walked us through the products on show.  Two things he mentioned, are wholeheartedly worth repeating; Did you know it’s easy to eliminate that tell-tell brown line? Just ask your fabricator to mitre the edge of the join, and hey presto the brown line vanishes. Secondly, did you know that you can fix laminate directly on to tile? No, me neither. Also, it can be applied directly on to a stud wall.  A big deal when you are thinking about a lower budget project. 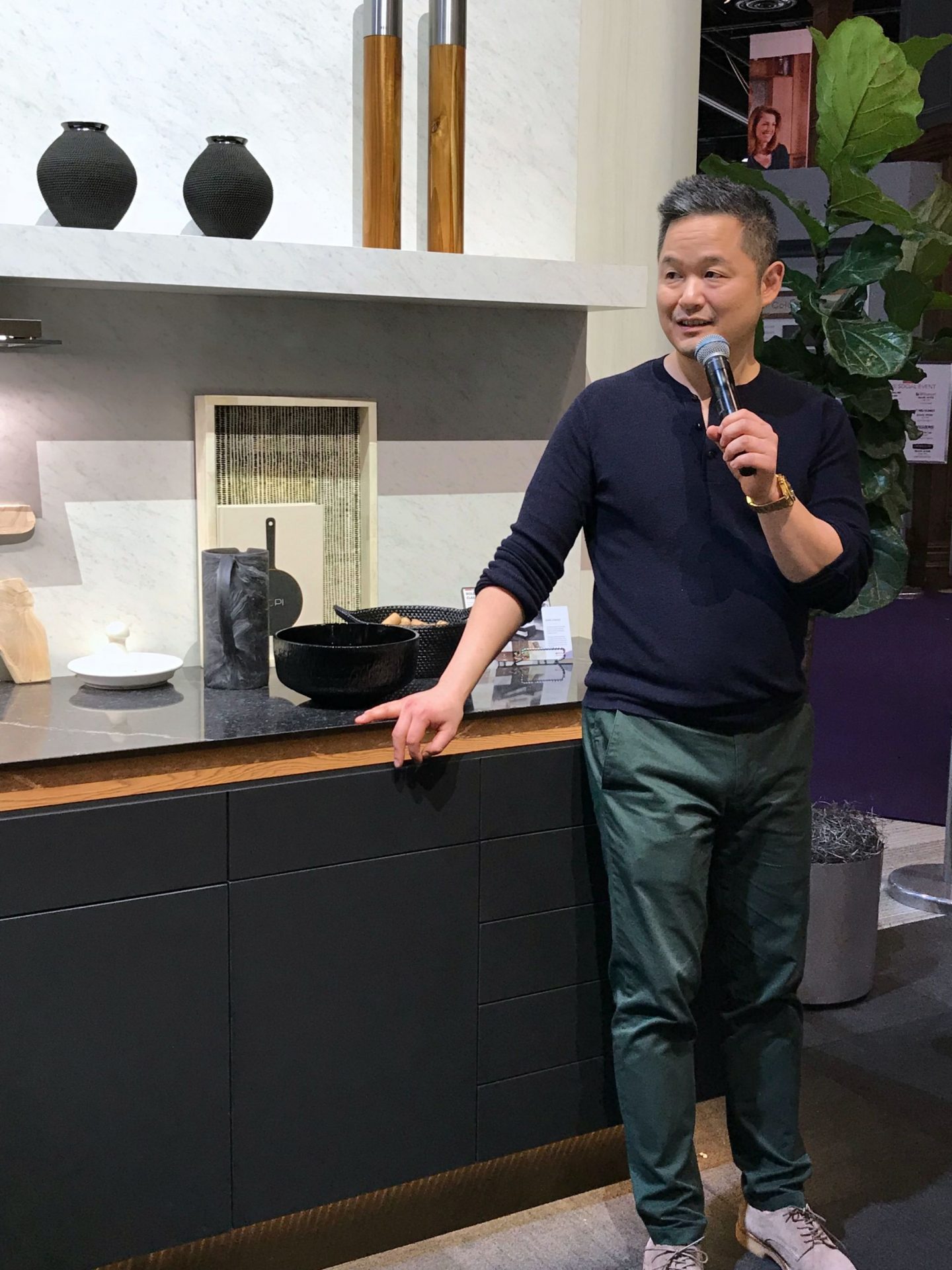 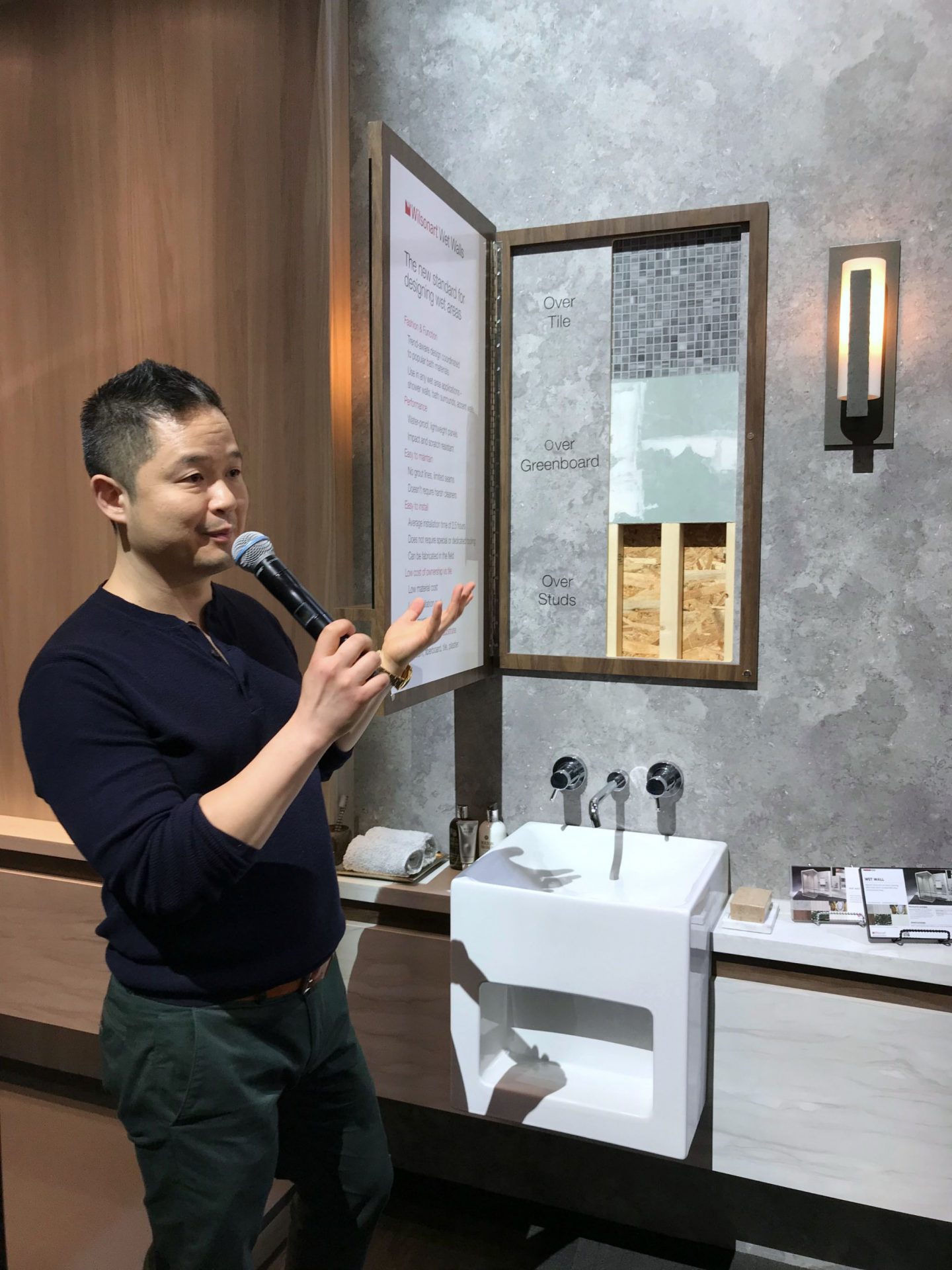 AND not to be forgotten laminate in a shower!

Another budget-friendly option, if you shop around, are tiles. Not surprisingly KBIS was fertile ground for tile spotting. Surprisingly though colour was in short supply and the dominate offering was in black and white often in combination. Statement splashbacks were everywhere but shape wise the metro tile was surpassed for geometrics, with an abundance of hexagonal tiles. From rustic to glamourous mosaics there were plenty of hexagonal offerings. Another growing tile trend was the 3D or textured tile perfect for those statement splashbacks. It won’t surprise you that the Ann Sacks stand was incredibly beautiful and polished but it’s not exactly a budget offering. Sicis and Cosentino also showed some interesting new products, especially the new Electric Marble collection from Sicis. 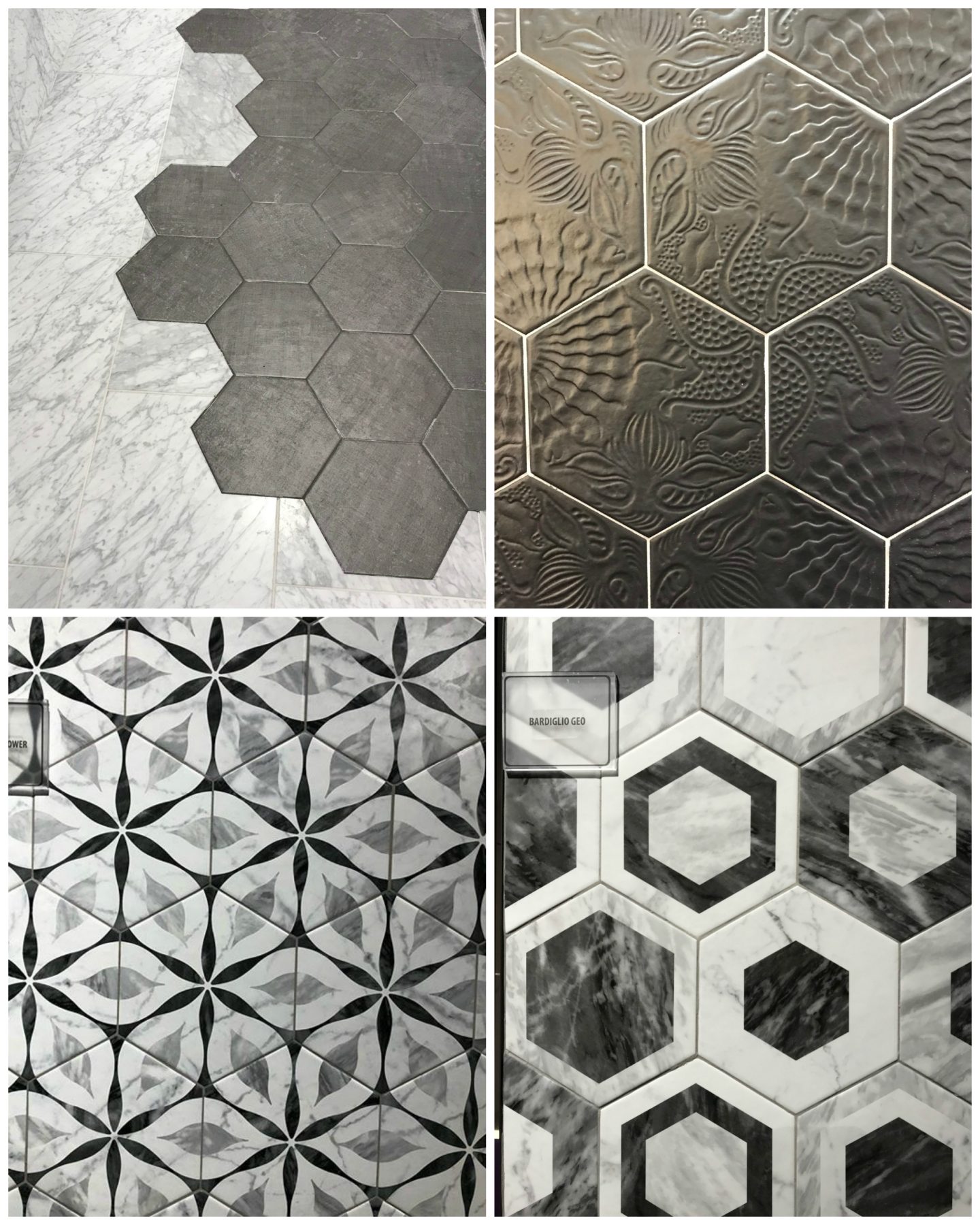 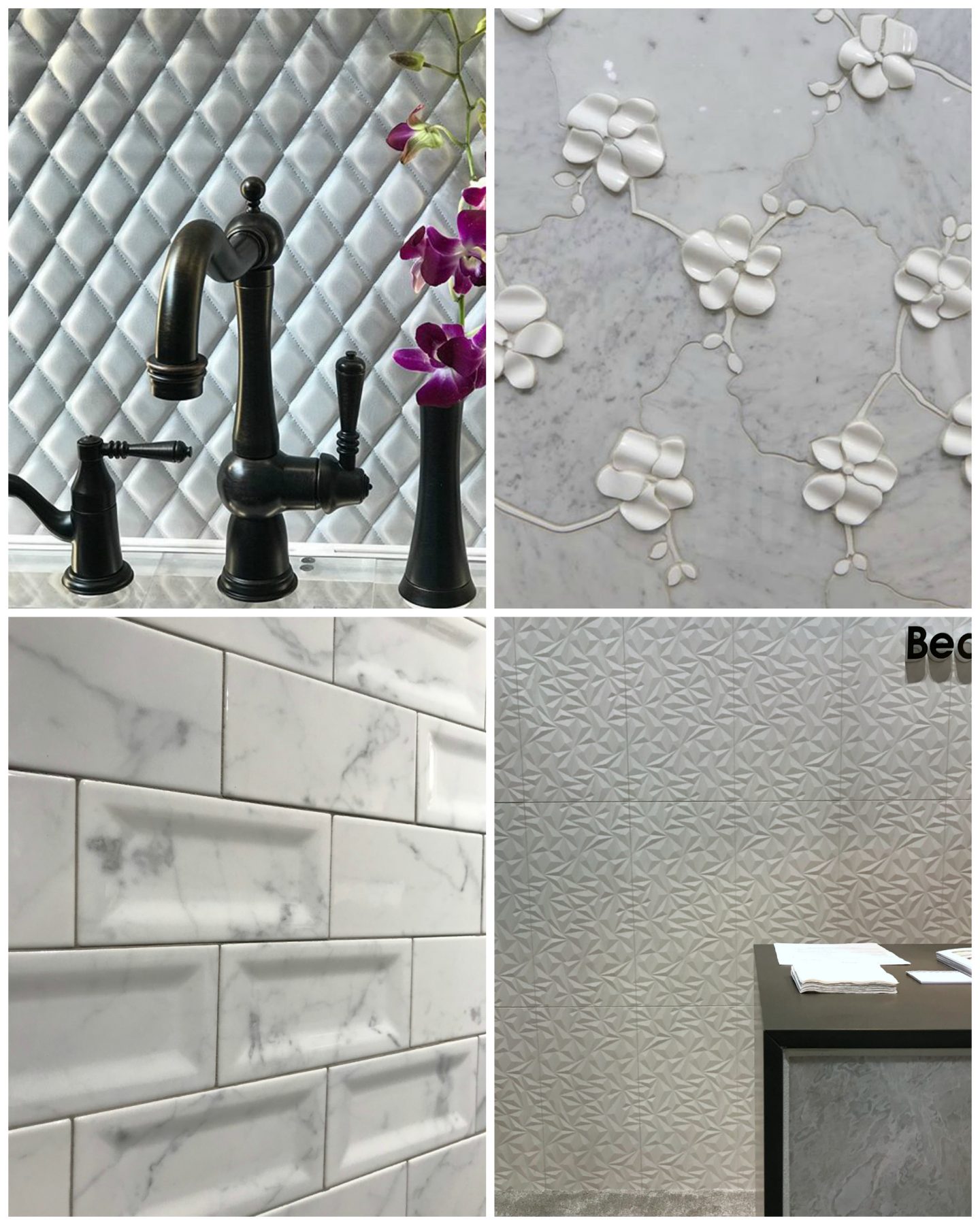 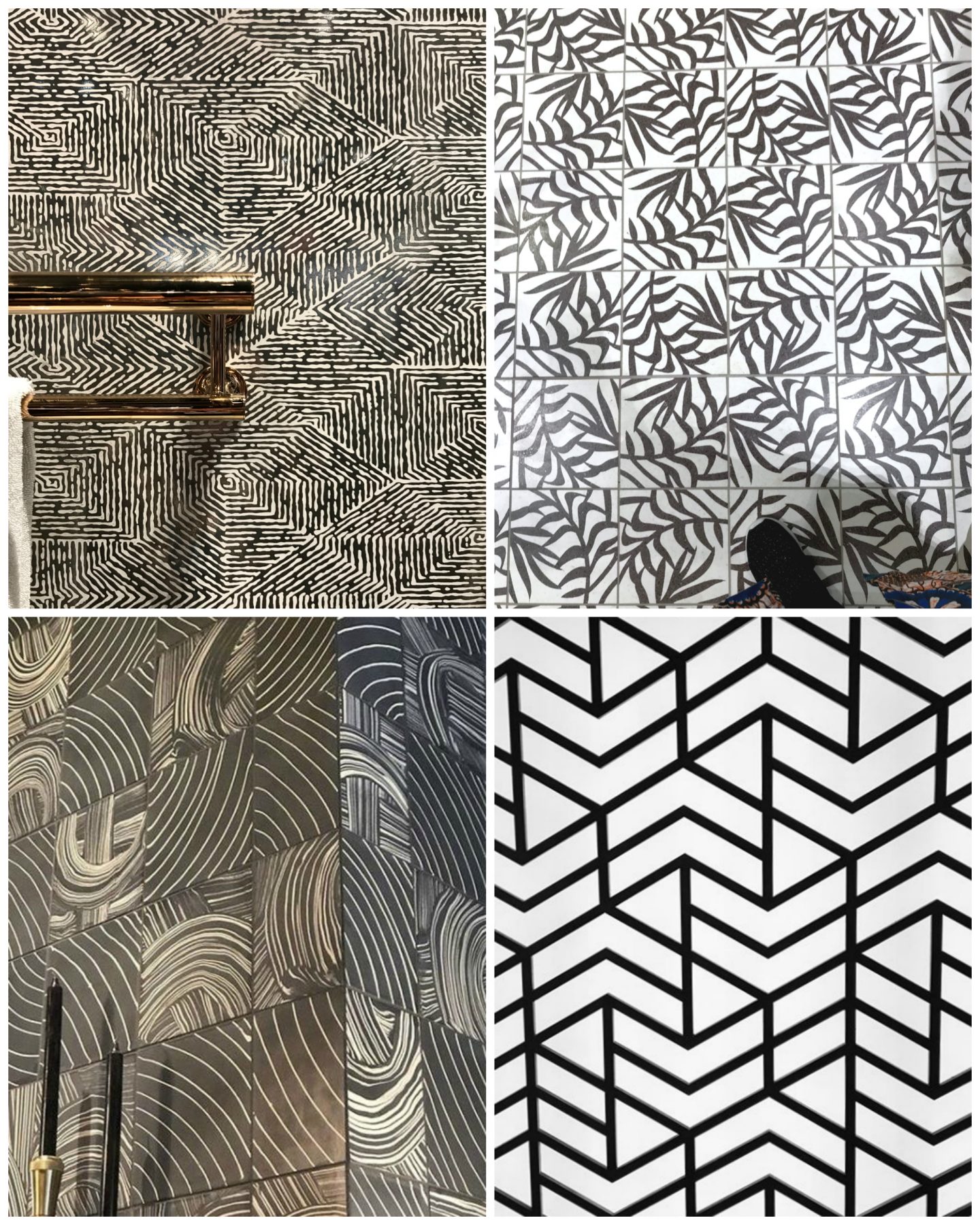 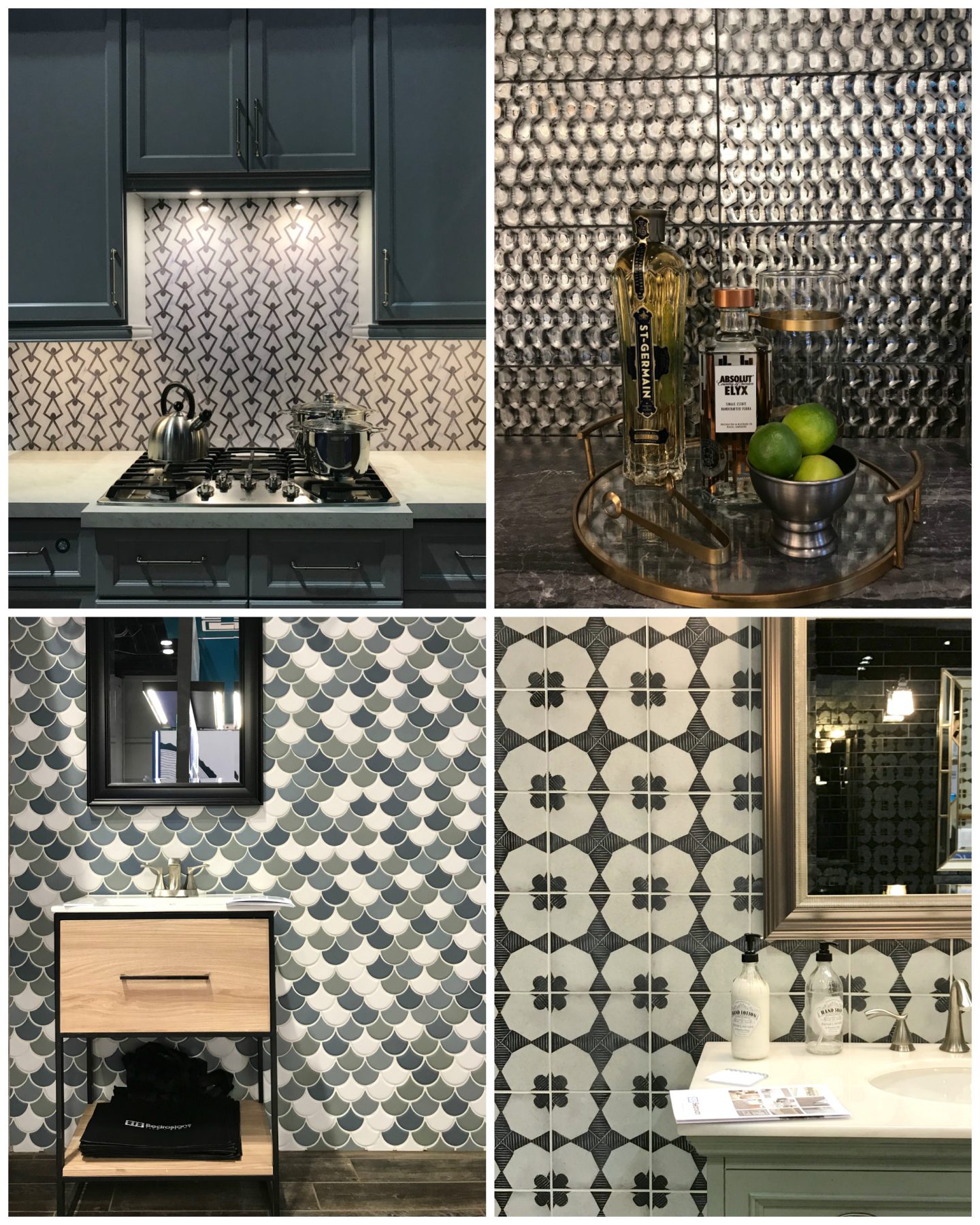 A trend that isn’t wavering is mixed metals. But also metals as a neutral is gaining momentum, it’s rather glamorous and was delivered particularly well at Ann Sacks, Rohl and the beautiful warm metals on show at Thompson Traders. Another metal effect that stopped me in my tracks was the ombré that I discovered on the Kohler stand. They’re calling it ombré vibrant, and in essence, it’s the merging of two metal finishes transitioning from light to dark. It was staggering. 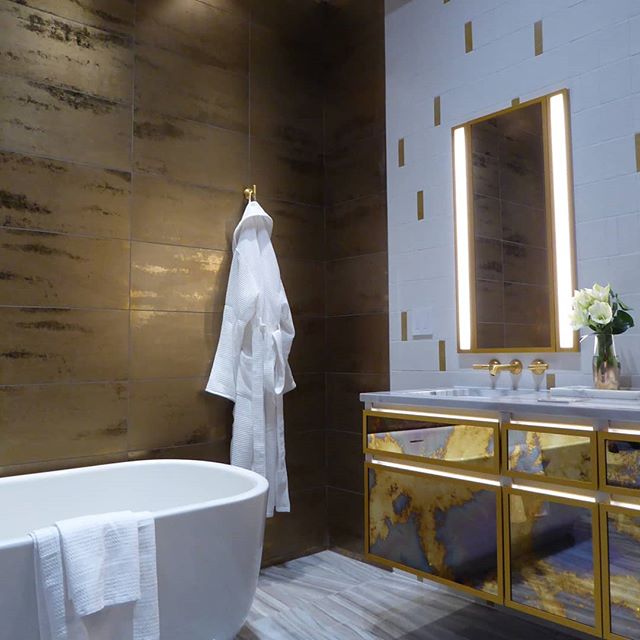 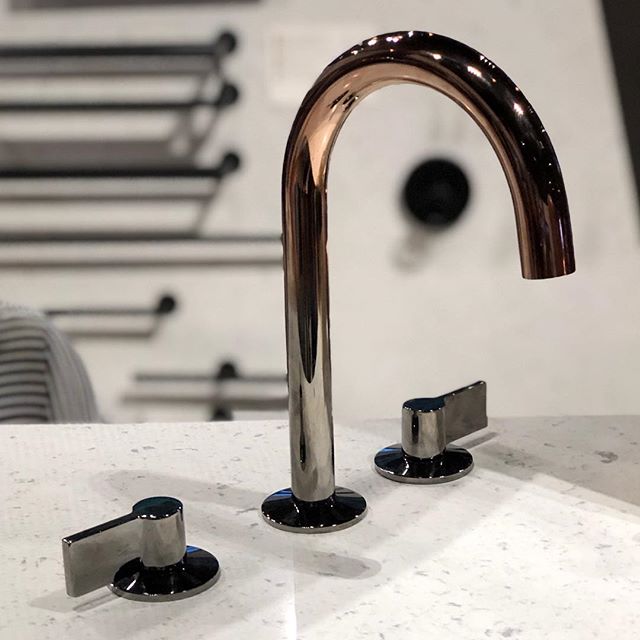 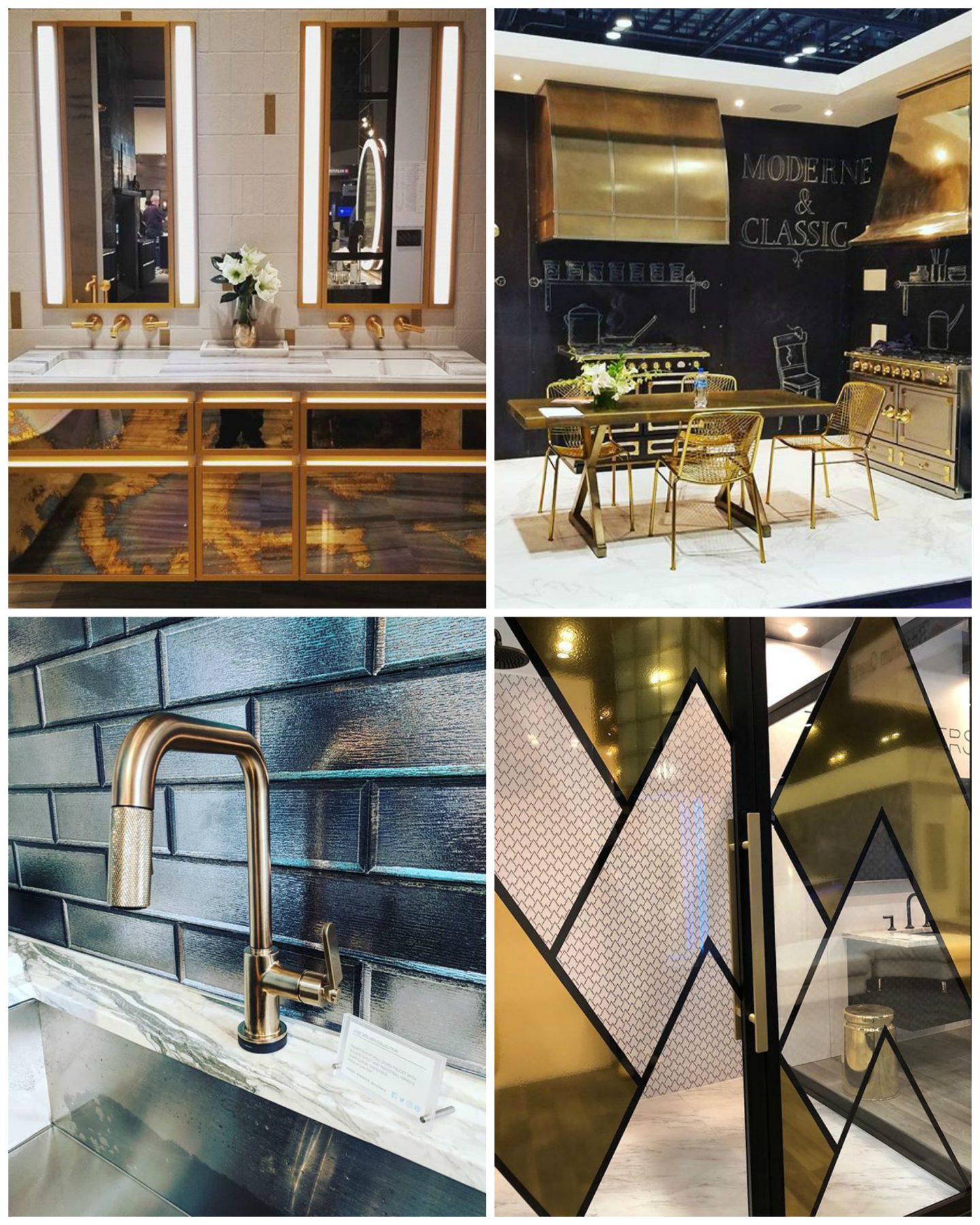 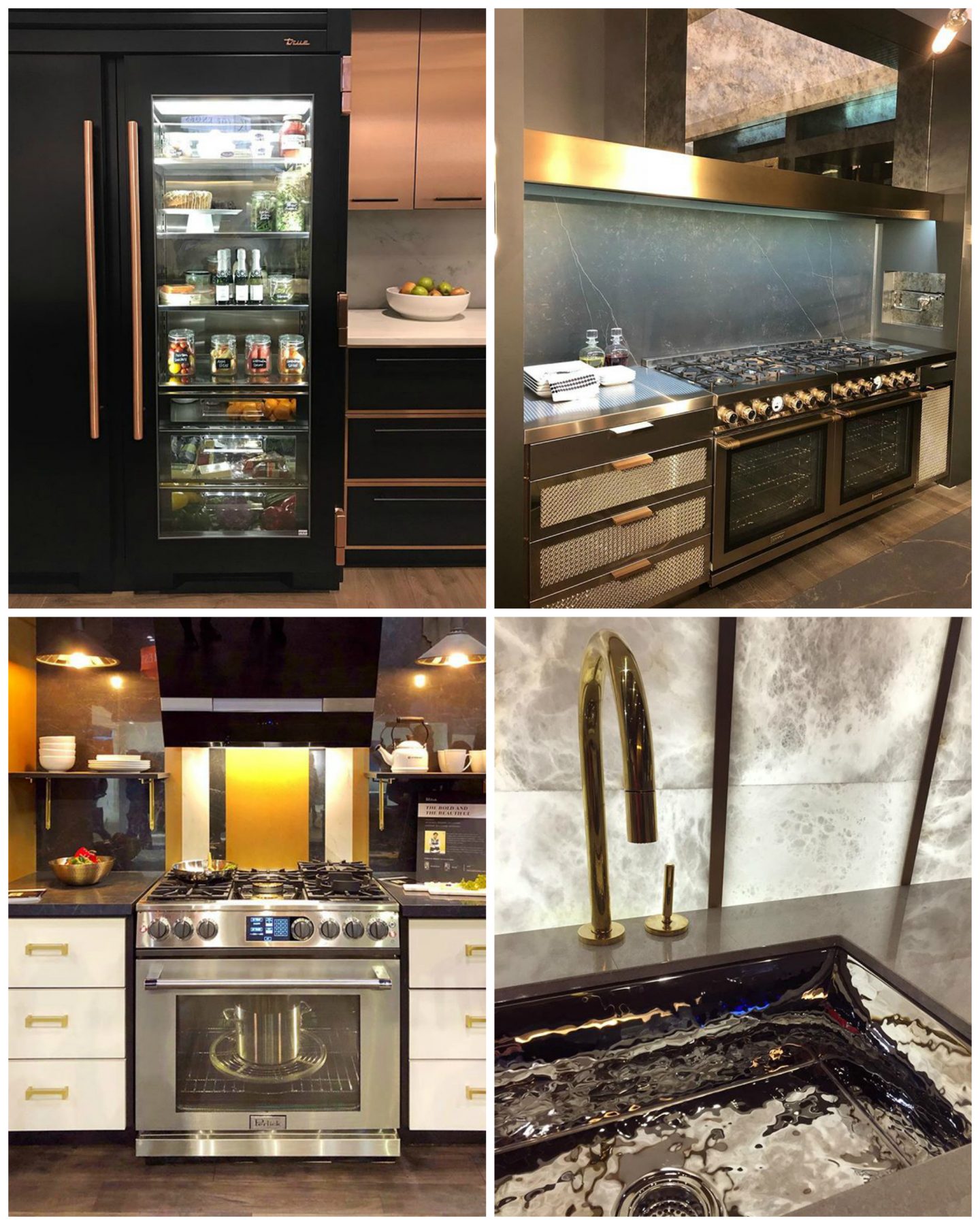 I hope you’ve enjoyed seeing the details of my trip to KBIS if you missed my previous posts you can find them here and here.

Photography: all photographs by Mary Middleton for hellopeagreen apart from Wilsonart shower enclosure image which was provided by Wilsonart.

This is not a sponsored post, thank you to Modenus and KBIS for inviting me on this free press trip.  While I did not get paid for my time at KBIS, my hotel, airfare and some meals were covered.  All words, opinions and images my own