Milan Design Week as always was an epic chaotic adventure with lots of unplanned stops and last minute change of plans.  It’s, without a doubt, the biggest design festival on the planet and hoards of design lovers descend to partake in the spectacle. Meaning the city is busy busy busy and occasionally you have to put up with some pretty snobby design cognoscenti trying to make you feel inferior. It’s ok though, as every level of design is represented at MDW – from IKEA to Tokujin Yoshioka to Jamie Hayón. Over on Instagram, I have been spamming my account with all the beautiful design I’ve seen and amazing spaces I have experienced. There is far too much to share in one post, so I’m going to share in a series. Stay with me. You’ll enjoy it I promise. 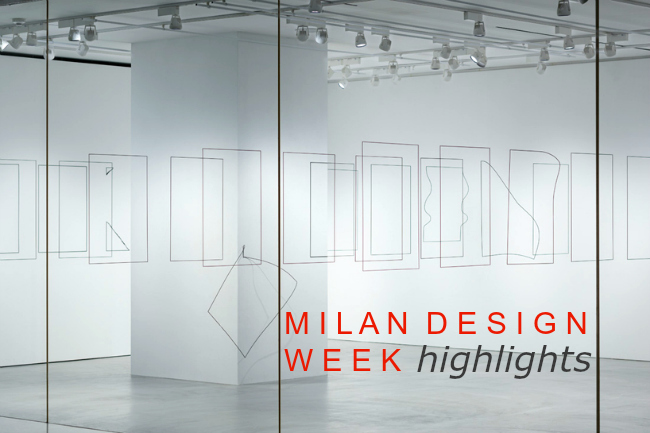 Here’s an eclectic mix of some of what I discovered around the city starting in Brera which is somewhat seen as the heart of the Fuorisalone – or at least its party capital.

If I’m going to start here geography wise, I’m going to have to start with Dimore Studio. Britt Moran and Emiliano Salci, the duo behind the interior design firm Dimore Studio, are the name du jour in Milanese interior design and have been drawing a crowd at their gallery and exhibition space for a number of years. This year the crowd was denser, keen to see what they had dreamt up for the 2017 edition of Milan design week.  Not content with one exhibition Dimore Studio showed a second exhibition, at Circolo Reduci E Combattenti on via Alessandro Volta, exhibiting the their own new collection of garden furniture and textiles. The space was styled for maximum impact and Instagram readiness. 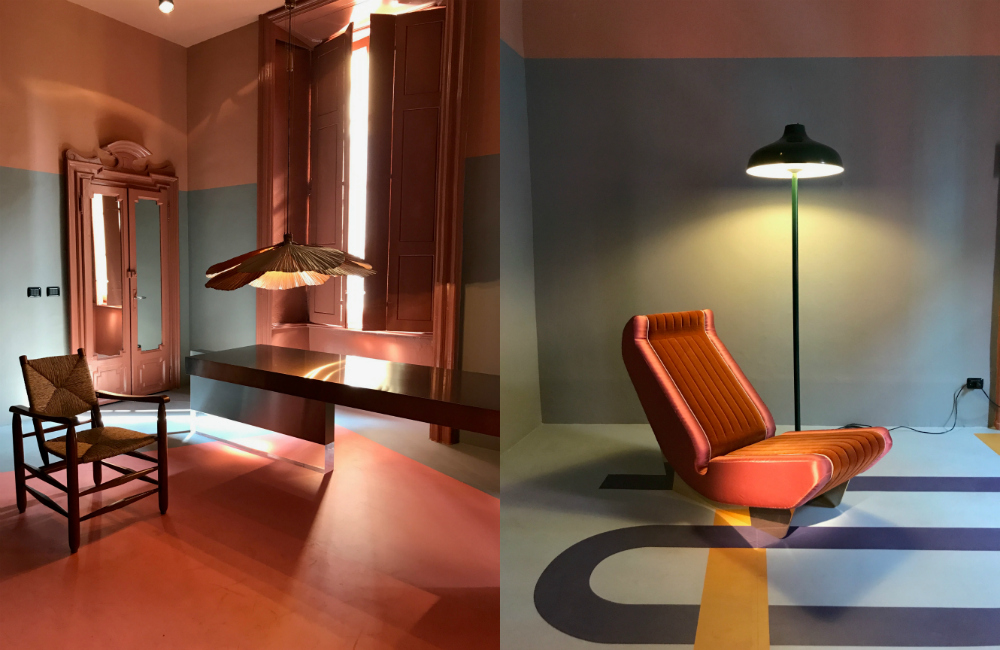 I personally enjoyed the colour palette they used in Via Solferino of slightly faded hues, and they always employ all the sense to create atmosphere, through scent and a very evocative soundtrack. For others, it’s that there is always something of a twist – the two rooms bedecked in seventies nostalgia for example. Whatever it was the crowds were there to pay homage. 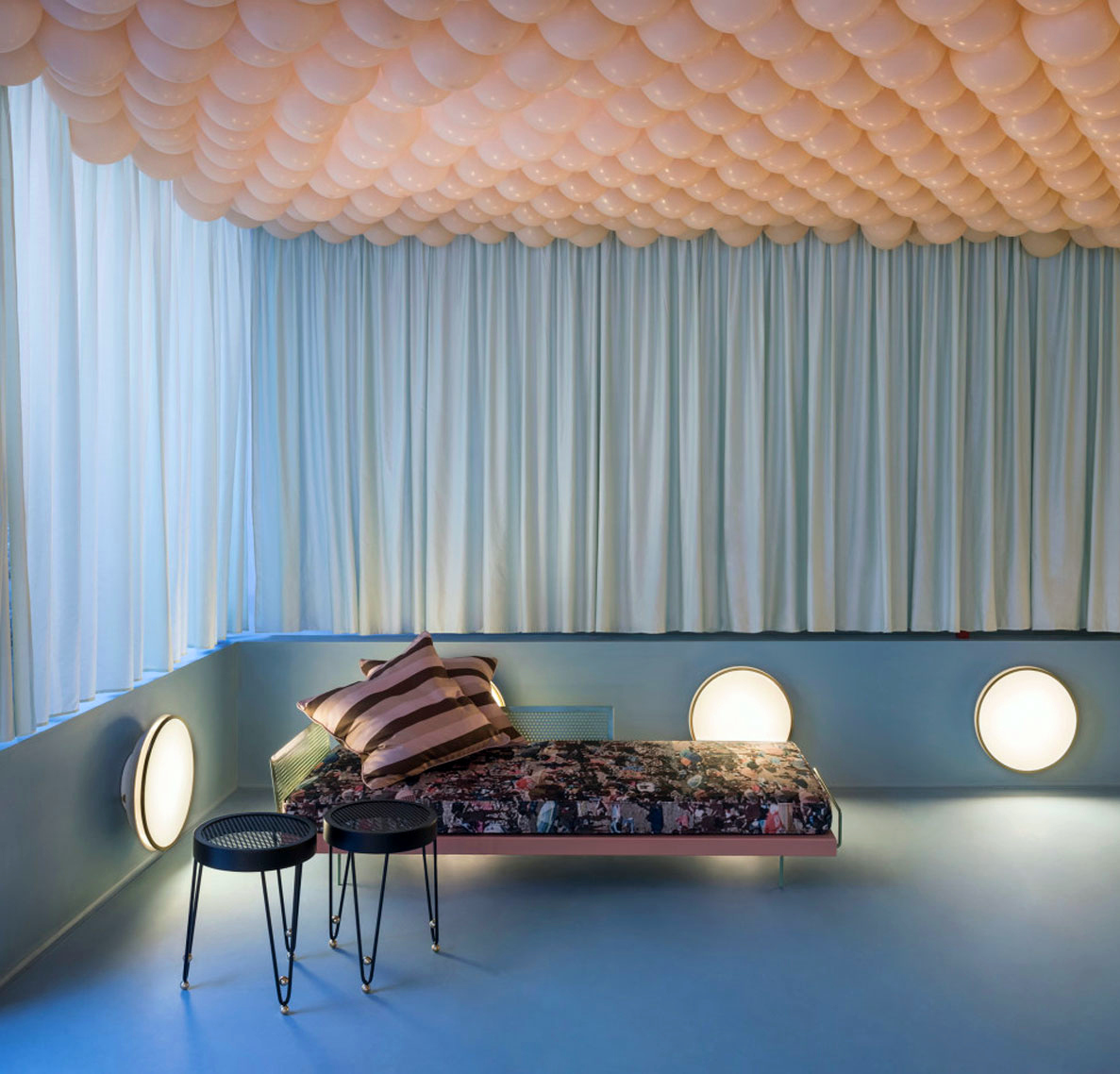 In contrast, the all-white environment of the Jil Sander showroom was the perfect foil for the Invisible Outlines exhibition by Nendo. The Jellyfish Vases of whisper-thin transparent silicon in different shapes were captivating, if not terribly practical. But when it looks like art, practicality has no need for inclusion. The atmosphere was particularly calm, and as I came early in the day I was lucky enough to experience it without the crowds. 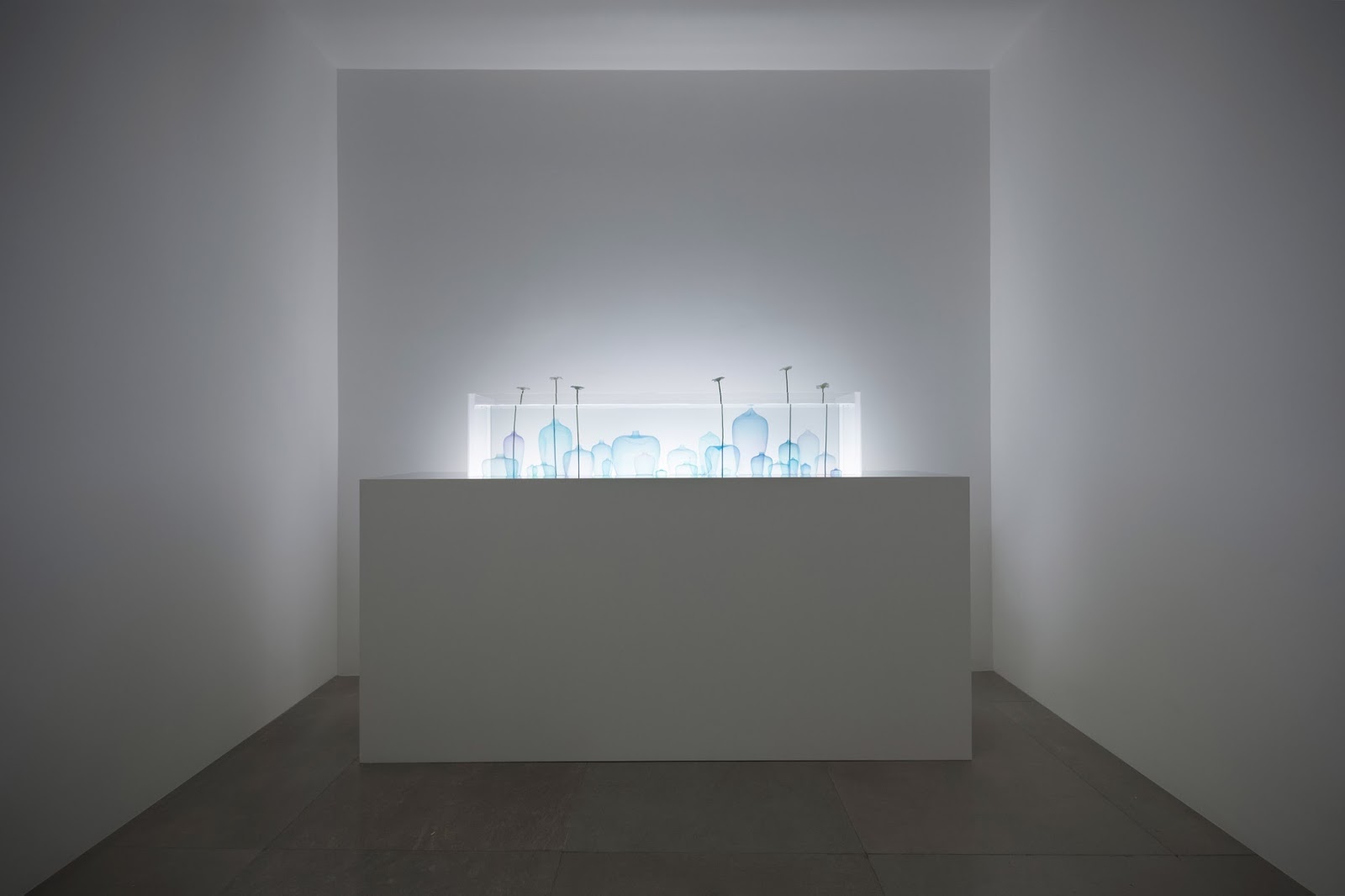 Another apartment on show in the Brera was The Visit by Arianna Lelli Mami and Chiara Di Pinto from Studiopepe. As an exhibition, it tried to explore the ritual of visiting someone. I’m not convinced I was attuned to that, but what I did find myself drawn to was the beautiful domestic scenes and scale of the objects. It genuinely felt you’d walked into someone’s home – admittedly one that was Instagram ready without the detritus of everyday life – the books being a little too orderly and magazines too tasteful. The colour blocking used in the apartment was my absolute favourite of the whole Milan Design Week. 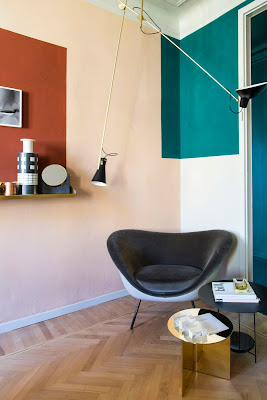 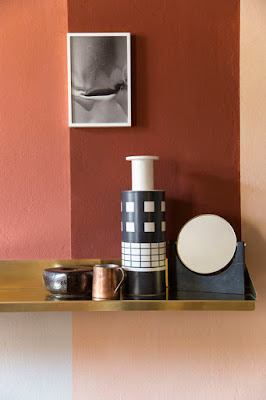 Tom Dixon never does things by halves. He took over the exceptionally beautiful cinema on Via Manzoni to present his Multiplex project. Like a mini design show, the focus was on the new collaboration with IKEA that invites customers to “hack” the furniture and create bespoke pieces.  There was also a rubber shop highlighting the collaboration with Pirelli. Tom Dixon studio also showcased their beautiful products with the lighting being a particular success. The new Optics pendant lamp is sure to be a winner. One of my favourite “shops” in the Galleria was the Antique shop curated by Giustini Stagetti. Also on show were Compac’s collaboration with Arik Levy and my friend Emily of 1882Ltd was offering free Gelato and beautiful ceramic “cones” from her company.

Holy Handmade from Wallpaper* in Mediateca Santa Teresa included the most Instagrammed object of the whole Milan Design Week I think (and so do Design Milk!) My own Instagram image received over 500 likes – something I’ve never ever achieved before and told me a lot about the popularity of the design. If you have no idea what I’m talking about it was the Le Refuge, a pink palm frond daybed designed by artist Marc Ange at the Wallpaper* Handmade exhibition space in collaboration with The Invisible Collection. It was a pink candyfloss meets jungle collaboration, and I liked it. 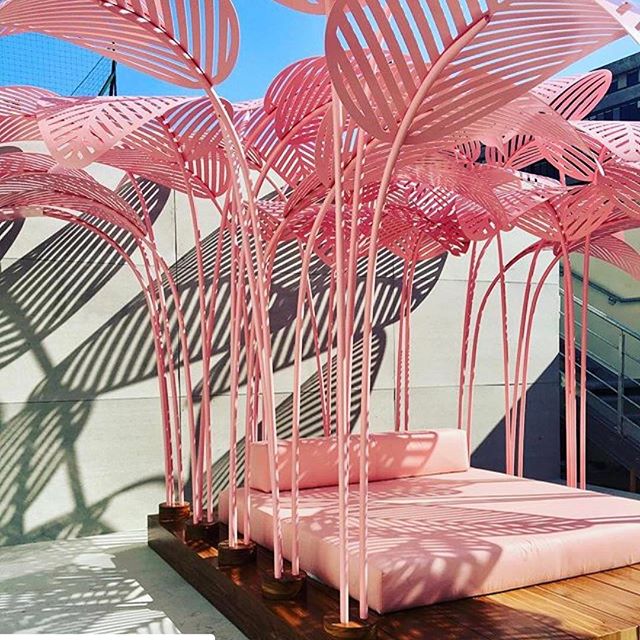 There is no such thing as the unexpected in Milan, mostly because everything is really unexpected. Just like the delightful yet small colonnade of Palazzo Anguissola on Via Manzoni’s display on neon art called Neon Poems by Luca Trazzi. I didn’t get to see it in total darkness, and I think it might have made my heart sing if I had. 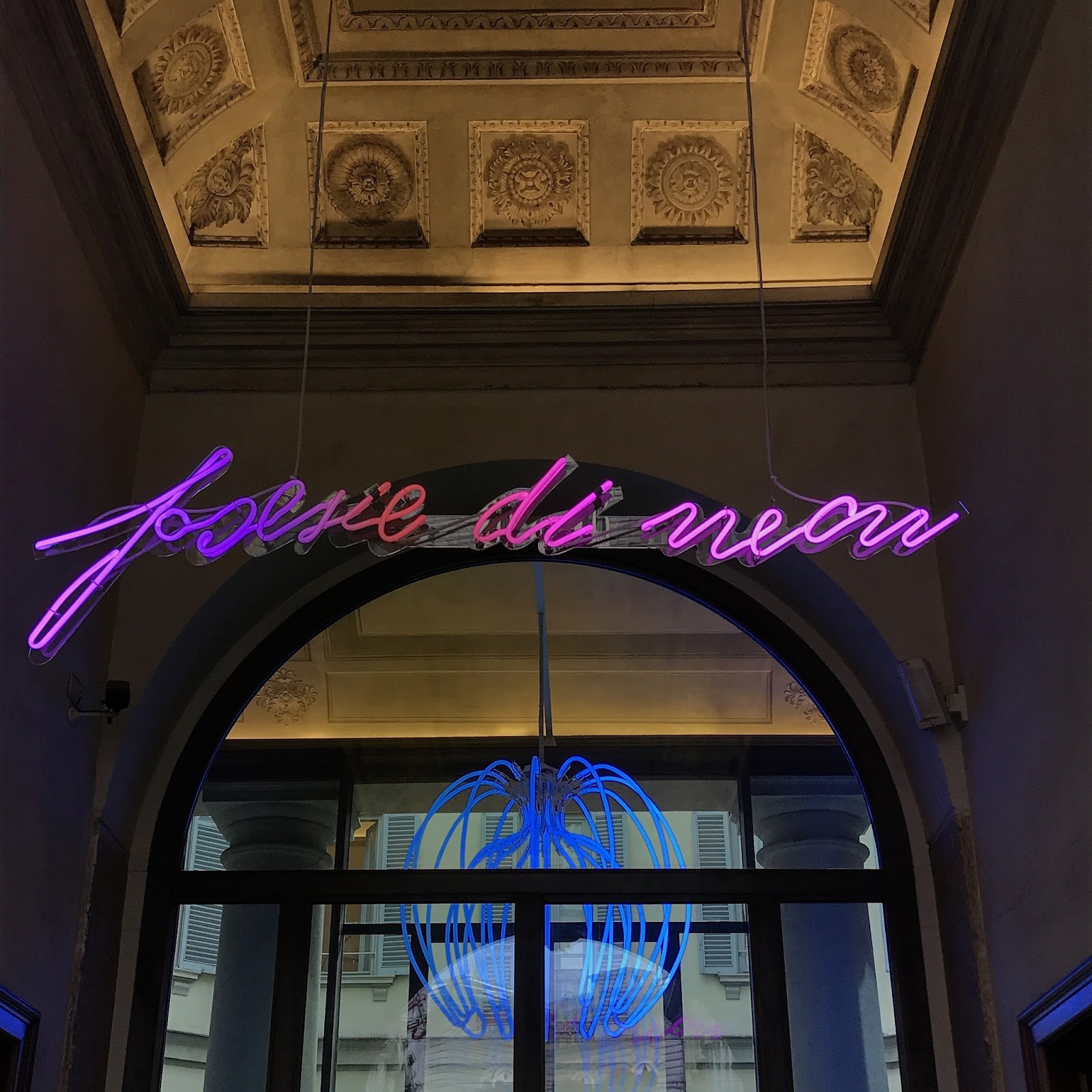 I didn’t go in to see the exhibition, but the architect’s offices of Piuarch in Brera proved that façades can be a green thing – well at least covered in flowers and vegetables.  Another unexpected find was that of Really which I’m going to post about separately and that of Matter Made which was a lovely little gallery space with gorgeous lighting and great dollops of candy colour on the walls.

What I missed during Milan Design Week that I wanted to see, was the Foscarini installation by architect Giovanni Maria Filindeu and Spazio Krizia presenting the works of Formafantasma. I also missed out on Cos in collaboration with Studio Swine which had a queue so long I decided to try my luck elsewhere, and I’ve been kicking myself ever since. 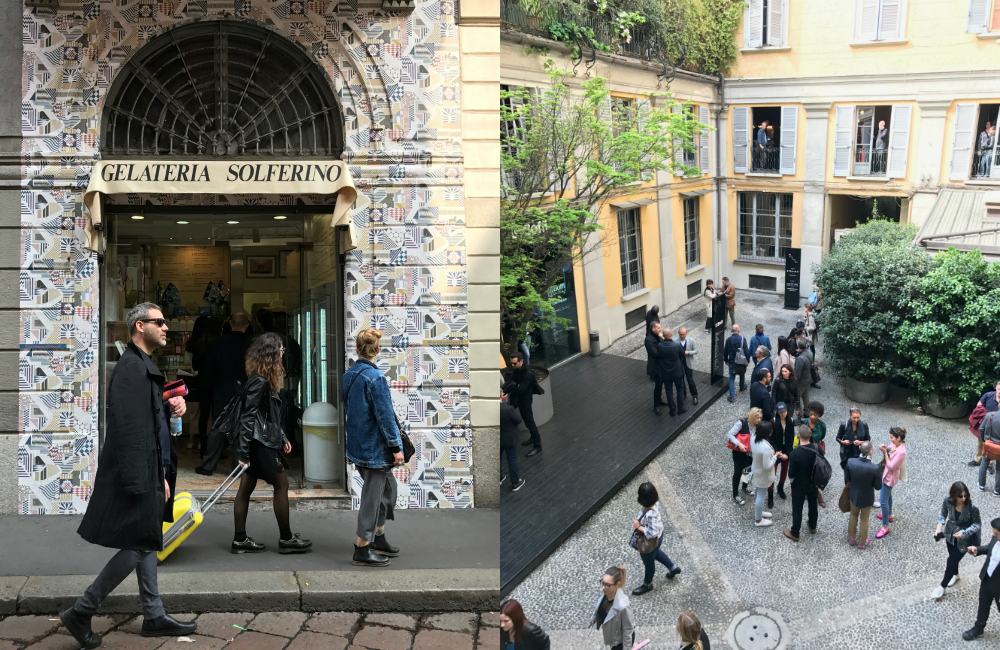 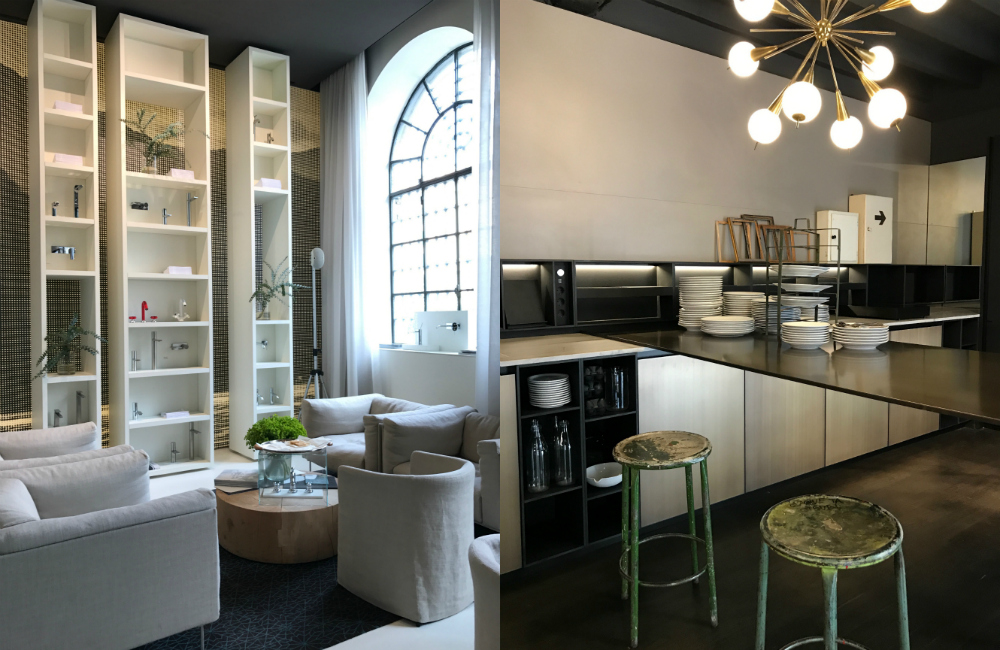 I hope you enjoyed my Milan Design Week round-up of Brera, if you like to see more from Milan from last year take a look here, here and here